Up at 6:45, on the beach 6:50. The surfers were also up and out in full force. I ran down to the pier, saw the fisherman unloading their catch and returned to Las Olas to watch the surfers catch las olas. 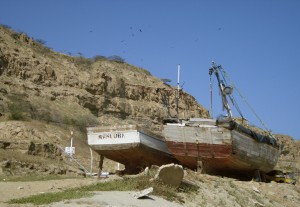 This was Mancora’s version of a morning traffic jam. There were way too many surfers in the water jockeying for position. Frequently, two guys would catch the same wave forcing one off. The breaks were even enough I didn’t understand why these guys were so cut throat.

The free breakfast was pretty legit. Good food. Good view. Fast WiFi, well until the power outage. I was only able to enjoy the beach until 11. With the nonexistent wind, even the multiple dips in the ocean were unable to cool me down. Since the other place, Kokopelli had a pool, I checked out early of Las Olas and walked across the street to check-in to Kokopelli 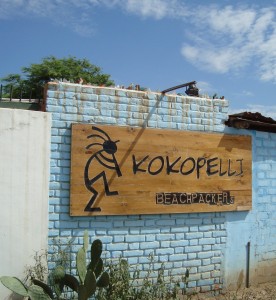 There were no rooms available yet since checkout time was not until 1PM and checkin was not until 2. Before I got settled into my return to hostel life, I wanted to take care of my hydration and clothing needs.

When I withdrew S.300 from the ATM, it gave me two 100 notes and two 50 notes. All of which, nearly impossible to break when you need only a large bottle 7L bottle of water for S.7. I had to hop to several shops to find a place that would both give me a bottle of water and some change. Several were just lazy dudes that just didn’t want to bother for such a small purchase. The kind soul that hooked me up was a lady who was in the middle of breast feeding her 16 month old son. She held onto her big boy while he held tight to her big teet while she searched her cash drawer, her purse and a third stash to give me change. Since she was so helpful, I bought a bunch of bananas as well.

Next, I needed to pick up clothes. Actually, what am I talking about? There was no need for more than a bathing suit for the next several days. However, in order to not forget about them. I picked up a nice large garbage bag filled with fresh, clean and pressed clothes.

The opening track Time to Relax on The Offspring’s album “Smash” ran through my head as I made it out to the Kokpelli deck:

“Ahhhhh, it’s time to relax, and you know what that means, a glass of wine, your favorite easy chair, and of course this compact disc playing and your home stereo. So go on, indulge yourself, that’s right, kick off your shoes, put your feet up, lean back and just enjoy the melodies. After all, music soothes even the savage beasts”

Time to relax. What that meant to me: a bottle of large electrolyte charged water, my favorite new sarong smoothed out on the deck adjacent to the pool listening to the music pumping through the stereo speakers at the bar. The first song was not the Offspring but, oh yes, Bloodhound Gang. What song? The song that had been playing nonstop on repeat in my head for 2 weeks in the Galapagos: Bad Touch. I laughed, this is probably appropriate as I watched the mating and courtship rituals of the savage beasts in the hostel. 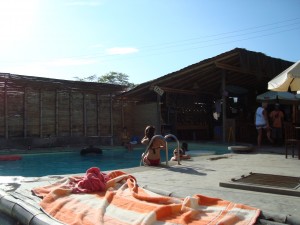 Compared to Loki, I liked this vibe much better. People were chill. The pool was a respectable size with a large deck and a sweet bar area. Each day there was a new drink of the day: Fiery Bitch and shot for the day: Sassy Bitch for S.5 and S.7 respectively. I was not feeling Fiery or Sassy at the moment and stuck to my water.

Once I was able to checkin at 2, I ditched the deck, locked up my laptop and headed to the beach again. This time I wanted to see how far I could make it down the beach the opposite direction from the pier. Apparently, not that far. A Peruvian man walked behind me and eventually ‘caught up’. “Que Pais”. I did not look at him beyond what I saw in my peripheral vision and kept walking. Since he kept pace with me, I stopped to grab my camera out of my bag. He passed and now walked ahead of me. I got a better look. OK, he was actually the first local man that was actually pretty hot. Hmmmmm. Keren, No! Bad News! He pulled my trick and paused several meters down the beach. The dance. My turn to pass. As I did, the hot local told me not to go further, that it was dangerous. “Peligroso!” 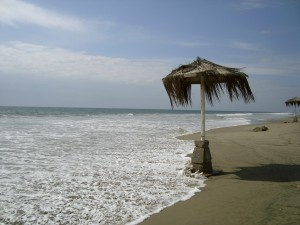 Sure. Whatever. I saw other people further down the beach, so I kept walking until I made it to the Point Bungalows. A policeman stopped me in my path, “No pase.” Me: “Por que no?” He just repeated, “No pase! Peligroso” Again: “Por que no?” He mimed to me that it was not safe to walk further by grabbing his imaginary side-ponytail (like the two I was sporting underneath my ball cap) and slitting his throat with his index finger. Fair enough, I kinda like a pony-tail tug now and then but I think I could do without getting kidnapped, raped, robbed or murdered. I listened to him and turned around.

Ok, I decided to chill and watch the surfers and sunset. My attention was drawn to the several mangey dogs roaming the beach. They were not a cute looking bunch with the visible ribs from lack of food and multiple scabs on various parts of their body from brawls and bug bites. The dogs would get all fired up when another would roam into another’s territory aka patch of sand. A few foreigners negotiate for turf when some of these dogs would come to reclaim their spot. I was one of the lucky few to have chosen a no dog zone. None approached me or tried to sit on me.

Back at Kokopelli, I showered and got acquainted with some of the other 6 chicas the 8 bed dorm.

*Emily. English. Closest to my age. Staying in Mancora for 6 weeks to volunteer for a children’s center. She had just gotten engaged to her boyfriend of 10 years. She asked me about Galapagos. After I showed her photos, her maybe turned into an absolutely in regard to having to visit.
*2 Israeli chicks. One I just called Sobrante since she was still laying in bed hungover at 6PM from the night before. The other, Adi. She was finishing up a 6 month stint and was feeling enthusiastic to be returning home.
*2 young British chicks: Zoe and Hannah from Newcastle just out of University. Both were sweet but clueless.
*The last girl, a Jessica Simpson look-a-like was sprawled in the bottom bunk below Sobrante with earbuds in and engaged 100% with her iPhone.

Leaving the dorm room, I headed to the pool deck/bar. The same 3 dudes that had been in the pool earlier, where still in the same position and rafts. I wondered if they got out of the pool to pee? They did not even leave the pool for beers, as they had them delivered. As the newcomer to Kokopelli, I felt like I was under the microscope. The residents: Peruvian dudes that worked there and the 4 other male volunteers, travelers on a work-exchange for free lodging paid me extra attention. One, I HAD to avoid since he was a spitting image of my ex-boyfriend known as BT aka boy toy. He made eye contact with me and smiled. I felt an electric surge through my body but then told myself: Peligroso!!! Emily had given me the heads up on the Mafia of Mancora and the Soap Opera that was the Kokopelli. Very incestuous! The only man that stood a chance was a sexy Australian with beautiful blue eyes, temptingly pull-able shoulder length hair, rugged beard from travel and sexy accent. I bantered with him and others until the power outage.

This was the catalyst for many to leave the hostel to go on the prowl and rage for the night. I was not feeling like going partaking. Too peligroso! High risk of hangover. Also, since I was fresh meat: high risk of getting devoured by some sexy savage beasts. I returned to the sanctity of my all-girl dorm for the evening to remain unscathed by the 2 intoxicants dangerous in excess: alcohol and sexy men.