Our flight to Santa Marta was not until 12:10PM. Carlos was up early and jumped in the shower first. I took my time getting up. Showered. Packed. Carlos had the lady call for a taxi. She and her friend made the executive decision that we did not to leave at 10. She informed Carlos the driver would be coming in 30 minutes rather than 15. This and the fact she would not tell him how much annoyed Carlos.

The 45 minute drive to the airport it was beautiful winding through the hills while viewing the valley below. Carlos said it was probably were a lot of the drug lords live. We got to the airport faster than I expected. Checking in was fast. Going through security was even faster.

Carlos & I stopped at a place for breakfast. Just before mine arrived, I noticed my neck pillow was missing which also included both of my eye shades and a spare pair of earbuds I use for the plane. Damn! I walked back to security to see if they found it. A bright pink pillow is hard to miss. No luck. The only item I was bummed about was my

new eye shade that I just picked up in HI. Lesson learned, never keep your spare in the same place. Since I have been trying to get rid of one item before each move. Since I didn’t leave anything at Tamarindo Inn, I made up for it by leaving 4 items at the airport.

An announcement notified us of board was about to begin at 11:45, on time. So much for the rumors about Avianca being always delayed. The flight was only an hour. Both taxi rides took longer.

Wahoo! La Brisa Loca had a private room available. To make me happy, Carlos offered to pay more to cover the difference between half a private and what I would pay for a dorm bed. I appreciated the gesture and he appreciated not being subjected to a dorm. At check-in, Ricky, the receptionist had the same family name as Carlos. Both their families were Portuguese and had relatives in Venezuela. Could they possibly be cousins? While they settled check-in matters and conversed, I made new friends and got into the groove of Hostel life.

While we waited for the people to check-out and the room to be cleaned, we each had a “welcome beer” on the house. Ryan, a Californian from SoCal, the shirtless bartender gave us our beers. The owners were also from San Francisco. Looking around the lounge this was no surprise. At 2:30, Ricky notified us the room was ready. 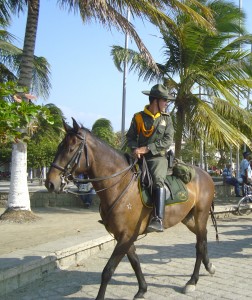 Quickly, Carlos and I dropped our bags, rummaged to find our bathing suits, changed, slathered on the sunscreen and eagerly headed to the beach. Once we made it to the beach, disappointment set in. Despite finally making it to the Caribbean, it was not a gorgeous site. Looking at the beach, to the north, less than 3K away was a few container ships sitting in the port among the gantry cranes. To the south, a marina full of sailboats and coast guard boats. The only people on the beach and in the water were locals.

OK, so no laying out on the beach. Carlos & I walked along the malecon. A few policeman on horseback passed me looking more like boy scouts in uniform rather than enforcers of law and peace. I wondered if they would take bribes in Girl Scout Cookies rather than cash. There was the ever-present vendors selling ceviche and limonada. 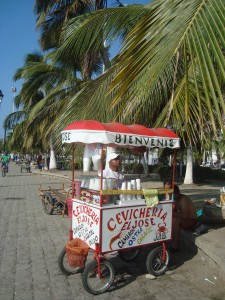 The hostel had a rooftop and pool, so we headed back. Carlos was preoccupied about finding a place to stay in Cartegena since none of the places I e-mailed the previous day had replied. Working with him on this project got me a wee frustrated. I aborted mission leaving Carlos to figure it out since his standards were higher. The rooftop with sun about to set was calling my name and I answered going up with my book.

Marcus, whom I had met at check-in, another former SF resident was settled in a hammock reading a book. I grabbed a hammock next to him. A few unexpected gusts of wind almost sent my Rainbows flying off the roof. La Brisa Loca! Then I got a few whiffs of a familiar SF smell. Looking up from my book, there were 2 guys hunched under a table to buffer them from the wind smoking weed. Yep, they too were from California, one from Mendicino and the other outside of Orange County. Carlos came to the roof. Him and Ricky sorted everything out. Now, 5 people from California were sitting on a rooftop in Colombia living La Brisa Loca at sunset.

Carlos & I made another venture out to explore Santa Marta. This time in search of food. Yay! Foodstalls. Boo all meat except for an arepa cart. Carlos said these were made like the Venezuelan variety which makes sense since we were so close to the border. I ordered an arepa con queso with very tasty green chili. Sadly, chili has been missing in my life lately. This is one of the surprises about Colombia, food, not so spicy. We found a proper dinner. La Comida: sopa, limonada, pescado, ensalada y arroz con coco. 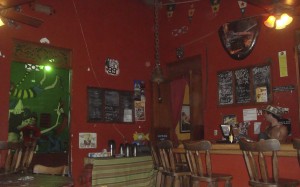 Food now lining our stomachs, Carlos & I hit the hostel bar. They had a late night happy hour from 8-9. I shared the photos taken thus far on the trip over our Happy Hour drinks. Whew! The drinks were strong and we got happy. 2 Slovenian chicas joined us. The pool table was lonely, we decided to give it company. Neither of the Slovenian chicks had played pool before. Carlos taught one, I taught the other. The way I played that evening looked more like I had never played before. They bought us a round of beers. Sometimes people say after a few drinks they play a better game. Tonight, this was not the case, as none of the 4 of us were able to make the balls into the pockets it  was the longest game in history.

Carlos wanted to have another beer. I got the key to the room and pulled my magic disappearing act I perform with great skill when the party is still going strong and I know that I should not drink anymore. Without fail, the next day I hear, “Wow, I don’t remember you leaving last night!” See? Magic!