Four more days left here in Bangkok and on this side of the world. I woke up early to maximize my remaining time here. I was showered and ready to roll when Alex was knocking at my door. It is weird we are still in synch in a few ways, I guess being with someone for over a decade can do that.

For breakfast we ate at our favorite chicken and rice lady’s stand tucked in the back of the market. I had not visited her since my return from India since I was no longer eating meat. Alex on the other hand had tried to stick to a veg diet but the call of chicken was too great. He had been making daily visits since his return to Bangkok. The chicken lady seemed happy to see me again. I was happy to see Alex eat 3 pieces of chicken and 2 plates of rice because he needed to get back to his healthy weight. I just ate rice with her extra special chili that I loved so much. Her chili was hands down my favorite in Thailand, I finally figured out her special ingredients kaffir lime and lemongrass in addition to lots of chilis.

Alex joined me on my journey to the Chatuchak weekend market. We learned our lesson from the last time and got to the market as it was opening at 9AM in attempt to beat the heat and crazy crowds. Plus, given the market is a sprawling 35-acre indoor/outdoor market with over 8,000 vendors its wise to start early.

This market attracts both local residents and foreign tourists with roughly 30 million baht exchanging hands in a single day! It originally started out as a market for bargains, but over the years has morphed into a haven for specialty stalls that charge more. Given the size and numerous stalls, it is easy to get lost among mixed bag of goods being sold. You can find new and used products of all sorts: clothes, books, furniture and home decor. Thai handicrafts, ceramics, silk and antiques can be found most of these are fakes. Genuine antiques require a permit to be taken out of the country. There is a section for exotic plants and animals. The pet section is controversial since it is not uncommon for endangered animals to be sold here on the sly. There are plenty of food stalls available to help keep up your energy.

Oftentimes I remember the pleasant over the unpleasant. Once we got arrived, I was disappointed. My memories of the this market had been clouded by my love of the pet section (controversy aside). The weekend market is an enormous tourist trap. The vendors were assholes with inflated tourist prices and unwilling to bargain. At least I knew exactly where the bathrooms and ATMs were located among the maze. On the bright side, I found a goblet drum or djembe for my brother the drummer. The best part about this find was the drum had been handcrafted in one of my favorite Thai towns: Lampang and I did not have to lug it around all this time.

Alex & I left well before noon and lucked out by catching the #59 AC bus that runs to Khaosan Road. We got off well before KSR to explore a Thai version of Target and a few other stores along the way. I picked up a bottle of fish sauce. Given it would be impossible to transport a stinky and spiky durian, I opted to take home a tube of durian paste which is much easier to transport and avoid issues going through customs.

Like we had always done before, Alex & I took a midday break from one another. I headed back to the Banglamphu Market to pick up fisherman pants for my niece. The lady I had bought 2 pair from the previous day had promised me she would have some today. I returned to Thewet empty-handed and sweaty because she did not have any. I felt silly to have believed her. Duh, mañana never comes!

Alex & I went to a different neighborhood for our sunset stroll taking the long scenic route to Lumphini Park via the water taxi and Skytrain. On the Skytrain, I ran into my Dutch friends from my Chang Mai cooking class. Alex was stunned to discover I had made so many friends during my short time away from him. Of course I did not make mention Jan the hot German man.

Once at Lumphini Park, we walked on a packed dirt trail that circled an artificial lake. This park served as a large outdoor gym. A steady flow of runners approached and passed us head on. Perhaps we should be walking counterclockwise on this side of the world? Not only were there an abundance of runners getting sweaty but there was a crew of aspiring bodybuilders working out in an outside gym reminiscent of Muscle Beach in Santa Monica. Then we passed the largest aerobics class I have seen to date. This time I did not join in. 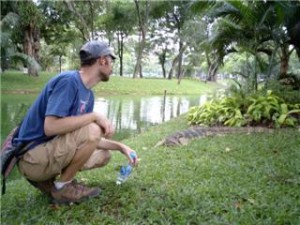 Alex & I crossed a tiny bridge onto a mini island within the park. I was soon startled by an enormous monitor lizard. Not only did the size of the reptile surprise me but also the fact we were in the middle of bustling Bangkok. These large lizards were scattered all over the wee island. Alex & I paused to watch a group of crows and their ring-leader trying to bully one of the lizards to get a fish-head. This sight brought us back to India where we had seen 2 crows were trying to figure out how to eat a live rat the same size.

The Suan Lum Night Bazaar was across the street from the park. The market was supposed to have a ton of vendors selling an assortment of goods and food along with a large beer garden and live entertainment. I think we made a record for the quickest trip through the entire market and lowest dollar/baht spent. The vendors were selling a lot of the same Thai handicrafts as we had seen earlier in the day at the Chatuchak market. Unlike other markets, there was not a frenzy of activity. The atmosphere was stale. Several stalls were unoccupied. It felt like a complete ghost town. There was no beer flowing nor music playing. We had no reason to linger. Market failure! We made our way back to our neighborhood that was not listed in the Lonely Planet but had a much livelier night market than their recommendation.