For many, it is common to wake up on New Year’s day with a wee hangover. After sleeping 10.5 hours, I woke up slightly hungover despite having only 1 beer. Okay, 1 large Chang beer that counts as 2. Plus, the dehydration from the extreme heat did not help matters. After showering, I went in search of a giant bottle of water followed with some food. None of the usual stalls were open. The Thai’s were moving slowly obviously hungover. This was atypical behavior as the Thais are usually up at the crack of dawn. I had only witnessed this once before in Chang Mai the morning after the Loi Krathong festival. I had to agree with marketing slogan for 7-Eleven. This morning I was “thanking heaven for 7-eleven” open 24-7 across from Tavee Guesthouse. I was able to get a large water and a yogurt drink to tide me over until my usual vendors kicked it into gear.

I could not blame the Thais for still moving slow given it was still early. My internal clock was still set to Indian time, an hour and a half earlier than Thai time. It was early in the evening on the East Coast of the US, 7:30 PM EST. My parents and brother should be awake at this hour on a Friday night. I headed to the Internet cafe to call my family as promised. My mom answered and yelled for my dad to pick up the other phone once she realized it was me. They had been eager to hear from me since the cryptic message I sent them from India 3 days ago. My mom was surprised to hear the news. For some reason, she thought I might be pregnant. Thank God that was not my situation! My dad did the usual by just listening for the majority of the conversation. I found it odd they seemed relieved rather than worried I was now on my own on the other side of the world.

After an hour conversation, it was time to call my Bro. Growing up, we have both tried to be surprise each other without success. Correction, I have tried to surprise my brother without success because he is a freaking good guesser! Somehow he suspected/knew I had broken up with Alex. Given the conversation him and I prior to leaving Bangkok, I guess it wasn’t too hard for him to deduce.

Leaving the internet cafe, I was happy to have the support of my family and best friend Clara (who I told a day before). Everyone seemed to have been just tolerating Alex over the past 11 years. Although it felt good to have people in my corner, at the same time I felt deflated no one had shared their concerns about Alex with me before now. However, I did not blame them for keeping quiet given my stubborn and strong personality, they all were waiting for me to come to the conclusion myself. Otherwise, there would most likely be unnecessary drama.

In a fog, I walked to Khaosan Road hoping to be able to trade in my Rough Guide India but all bookstores and book stands were closed. Pretty much all of Bangkok was closed until the 17th for the New Year. I decided there was no point hanging around Bangkok, so I shifted gears, headed to Hualampong station and booked a ticket to Chang Mai.

Given I was in business mode, I donned my poncho to prevent my passport and other documents from getting wet. The Thais were amused. Therefore, I was used as their primary target as I made my way along to and from my destination. Waiting for the trusty #53 bus, I hid behind a pane glass window of a nearby phone booth to shield myself from the trucks of boys on the prowl for easy prey. This reminded me of Spring Break in Daytona Beach Florida where college kids would douse women with supersoakers as they walked along the main strip to create an unofficial wet t-shirt competition.

Making it back to Tavee just after noon, I was exhausted. Why was I so tired? I guess I was still recovering from my India and relationship hangover. Given there was not much going on in the city other than a massive water fight, I did not feel guilty about taking a long afternoon nap. 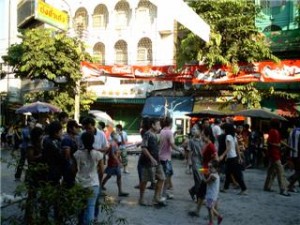 Around 4, reality hit me again. I got a little sad since this was the usual time that Alex & I would take our sunset stroll. To boost my mood, I took a walk that turned into a mobile shower. I danced with some Thai teens and trannies on the street and they anointed me with talc and kissed me on the cheek.

There are safety zones sprinkled along the side streets to escape the water assault. Food stands are off limits. I went to one of my usual fried rice stands and got egg fried rice minus the kai (chicken). Dining alone I found instead of being distracted from my surroundings engrossed in conversation, I was able to absorb the scenery around me. I watched a Thai Police officer pull over a drunk guy driving a scooter. The drunk Thai guy kept his smile as he got issued a ticket and watched his scooter get confiscated. As this was going on, another scooter went by with a man and his 2 dogs. The dog on the front was actually holding onto the handle bars.

Back at Tavee I talked to a Canadian rock climber from across the hall for a while on various subjects. Without Alex lurking around, I can now have more in-depth conversations with others. What a difference good dialogue can make to put me in a better mood. As long as I can have 1 or 2 conversations a day, I think I will be able to stay sane.

While it is good being in a familiar environment to adjust to my new status of being single and a solo traveler, I think the next time I come through Bangkok it would be better to mix things up. Despite liking the family who run Tavee, I need to stay somewhere else because there are too many memories of Alex lingering around here.

Despite getting hit with waves of sadness, I was unable to cry which I felt was telling. Although it upsets me to know I have hurt Alex with my sudden departure, it makes me happy to know I can now focus on my needs. Having a selfish travel partner and boyfriend, my needs have been pushed aside for way too long.

Now I can have fun and do anything I want without constraints or negotiations. I might be spending a little more money now that I am rolling solo but at least I can now do all the activities I wanted that were considered “out of the budget”. I guess I should be thankful for Alex’s strict budget, I have plenty of cash reserves to use now and later for resettlement. Now is time for fun! Tomorrow I am heading back to Chang Mai to take care of unfinished business or should I say unfinished pleasure.