The rain continues to come down. If March was supposed to be considered one of the drier months, then I am really curious as to what the wet season looks like! Our surroundings matched the dismal grey skies. Trivandrum, the capital of Kerala, is home to countless unimaginative government, police and army buildings scattered about the city.

Alex & I grabbed our umbrella to explore our options for breakfast. The streets and sidewalks were in disarray but after several months in Asia, this is not a new concept. The road was mainly torn up with construction. Progress at work, I guess.

Leaving the ashram yesterday, I was ready to be back in the city. Although Trivandrum on first glance doesn’t appear to be in contention for my top 10 list of favorite cities, I had missed the random chaos of Indian life. While I had enjoyed the ashram, the safety and serenity weirded me out a bit and felt a little artificial. I’m always one for a challenge. Being in a city like this is were the rubber meets the road. If you can feel at peace amidst chaos, you can find peace anywhere.

Alex’s mission in life seems to be to challenge my quest for inner peace. Ten minutes into our exploration, he was eager to have a morning incident. He was hungry, irrational yet infallible. Alex walked off refusing to hear he was headed in the wrong direction. This morning I thought to myself, “Nope, Homie don’t play that!” Not wanting to argue, debate or have a “difference of opinion”, I mimicked Alex by turning around and heading in the opposite direction of our originally desired destination.

My stomach was still on ashram-time. Instead of searching for food, I searched for inner bliss. I practiced 30 minutes of yoga in the hotel room. This morning, I was able to finally hold my headstand. Finally, I was able to achieve balance by myself!

I took brunch at the same time as the past few days at the ashram. It was good to eat normal Indian food again full of spices including onions and garlic and flavor with coconut. All washed down with an extraordinarily good chai.

Alex caught up with me after my brunch and was ready to be rational. I was ready to hit up the zoo north of town with or without him. I allowed amicable Alex join me 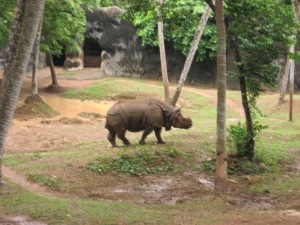 The Zoological Park was north of town. The zoo was well designed in my opinion looking like a smaller version of the National Zoo in DC: a park were animals happen to hang out in large natural-looking habitats. The larger animals were not trapped in small cages like those we saw in the Thrissur Zoo. The tigers and leopards despite being further south in the heat seemed more content than their Thrissur counterparts. The only animals in cages were the snakes and the birds. In Indian teenager tried to impress me with his bravery by taunting one of the cobras but ended up getting beat down by one of the guards. 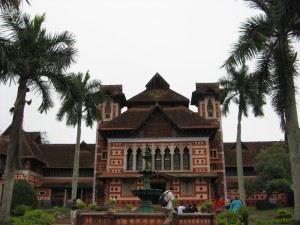 The nearby Napier Museum was an impressive building that held a staggering collection of wood, bronzes and ivory carvings from all over India and other parts of Asia. The ivory carvings were amazing with them being so intricate yet disturbing at the same time given they were obviously carved into elephant tusks There was a section devoted to Indonesia such as wood carvings and paper puppets. It made me want to go there instead of China after this segment of the trip. 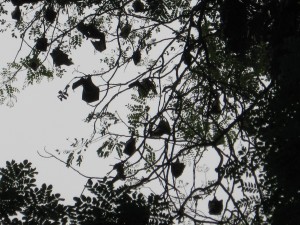 Outside the building of the Napier Museum external part of the building made me think of the beginning credits of a Scooby Doo episode with the overcast weather, old building with sloping roof with bats we saw hanging out before flying overhead.

On the way back to our neighborhood, we walked rather than taking a rickshaw. We passed Universities with Keralan-style architecture which starkly contrasted the brick buildings I am used to seeing that represent higher learning. What I like seeing most is coming to a corner that has a Mosque, Christian church and Hindu temple on each corner. What was on the last corner? A market of course! 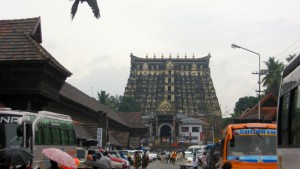 Being in the real world can be exhausting. Even though I had been focused about keeping my interactions positive, the assault of the sounds and sights were hard to combat.

Alex & I had a small and simple meal at 6. Afterward we found an Internet cafe. My internet session was extremely brief less than my 30 minute allowance. It was already time for me to shut down for the night.

As I slipped into bed for the night, I thought about my first full day on the outside of the ashram. Not perfect. But neither is life. I was pleased that I was able to keep calm and balanced. Here’s hoping to another day!