This morning I am defending Karma’s honor once again. Karma is not a bitch. Karma is my buddy. Even though the  guesthouse mouse had been devoting his attention to my nightstand and side of the room, he felt like giving Alex a proper goodbye as we got up at 4:30. I was happy to watch the mouse run over Alex’s foot and make my boyfriend squeal like a girl to give retributions for devoting his energy on me the past few days.

As we walked down the stairs upon check out at the wee hour, we followed a massive rat running down the stairs ahead of us down to the lobby where all the workers were still sleeping. This now made sense as to why the hotel was indifferent about the mouse. They had bigger fish..or rat to fry! Alex had to wake them one of the ‘boys’ in order to pay for the remainder of our stay and to be let out of the literal rat/mouse motel.

Even though waking up at the crack of dawn is not my favorite activity, watching the day come to life is. It’s a rare treat to walk through empty streets in relative silence. I watched the sun rise through the fog through the glass of my bus window. I watched a lone man taking his sheep and cows on a morning walk.

The bus zig-zagged through the mountainous roads past leveled tea plantations cut into the slopes. I tried to ignore the lack of concrete barriers lining the roads to prevent us from plunging down into the valley below until we passed an overturned lorry. Billboards showed women dressed in sexy saris which differed from the nipple exposed billboards I saw in Paris shortly after the Janet Jackson Superbowl debacle. Another interesting sight was seeing a new church with a huge Jesus out front seated like the chillaxed Thai buddha.

While I gazed out the window, Alex uncharacteristically made conversation with an Indian man who was a General Practitioner of medicine in Mysore. During our breakfast stop, Alex introduced me to him. For the remainder of the bus journey, he and I sat next to each other talking about drugs, the pharmaceutical kind. I discovered one of the new allergy drugs recently approved by the US FDA, 6 months ago, had been on the Indian market for 6-8 years. Plus, like I thought, he confirmed the incidence of allergies was lower here much like other developing countries because the US is too sterile. The sanitary bubbles we wrap ourselves in essentially make us sick since our immune systems are not challenged enough.

Alex, our new friend & I crossed the state border from Karnataka to Kerala, and got off at the same stop in Calicut. He was here to visit his brother. The doctor was more than hospitable. Upon arrival, he insisted on sharing a rickshaw with us to make sure we were set up at an appropriate room with acceptable rate. Before heading to his final destination, he gave Alex his number and invited us to join him and his brother’s family for dinner. This invitation I would have loved to have accepted but knew Alex had already declined the offer in his head. Later, I discovered our friend not only had paid for our rickshaw ride but our breakfast too. It pisses me off that Alex takes from everybody without giving anything in return. He is more than happy to let an Indian doctor pay for us but not make the effort to call him this evening or stay an extra day here to hang out with the nice man. My boyfriend is a miserable human being and I feel like I am becoming a worse person by staying with him.

Not only was our friend (wish I remembered his name but you know how Westerner’s get with names over 3 syllables) not used to hosting foreign guests, apparently neither was this town. I was getting penetrated with stares like I was a blonde-headed alien.

In Goa, I thought about Pavlov’s dogs and his bell. Since then, I tried to experiment with clicking my ballpoint pen every time Alex got ornery enough for me to take my leave. Pavlov’s dogs are easier to train perhaps due to positive stimuli. When Alex threw his mid-afternoon shit-fit, I clicked my pen and headed in another direction towards the beach. 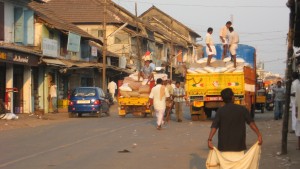 On the way to the beach, I passed through a huge market area where goods carriers were being loaded goods by the ton: sacks of potatoes, rice, garlic, onions and spices. Kozhikode as been a major port for well over 500 years providing the world with spices like black pepper and cardamom. Vasco de Gama, the first European to dock in India, did so here. Unlike Columbus, Vasco de Gama was correct when he called the natives he met Indians.

Much like my boyfriend goes by many names: Alex, Patrick and dickhead, many cities in India tend to have 2 names. Therefore, you can be confused not only in Mumbai or Bombay but also here in Kozhikode or Calicut. The anglicized name of Calicut is thought to be derived from the calico cloth that used to be widely exported by this port.

Despite the busy nature of the massive market, the workers  still had time to witness the wandering blonde, take note of my trajectory and sell me out. Since I was a rouge unescorted female, Alex was able to find me since all the men indicated to him the direction I had walked through the market’s maze. 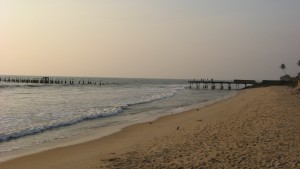 Kozhikode beach could not be compared to the idyllic Caribbean or Thai beaches. This beach was littered with various rubbish. The crumbling pier looked destined to be buried at sea in the distance. Despite the lackluster scenery, there were plenty of Indian men hanging around in their shortened man skirts most likely taking a break from loading goods carriers. Usually the men wear the dhotis like a woman wears a sarong: straight to the ankle. However, men can get creative too. Given the heat, men fold up the skirt and tuck it into the waist making it a skirt only a few inches above the knee. Scandalous!

There are plenty of sights to keep me in a constant state of amusement. As Alex & I hung out on the beach, we spotted a 2 crows and a large rat that was big enough to make a house cat run away in fear. The rat was picking through the rubbish skittered along the shore. The 2 crows were watching him were pretty massive as well. One crow went in to try to have a snack of the live rat. I am not sure if the other crow was taunting his crow buddy on a dare or waiting for seconds. I swear I saw the rat do an Indian head bobble as to say, “No problem” ignoring the predator. The crow gave up. I looked back and noticed that a group of Indian had gathered around to watch me & Alex. They seemed to be amused by our amusement. There is never a dull moment in India.

Within the apparent chaos, there is order. How else would you explain the symmetry of me & Alex beginning our day and ending our day with the sighting of a massive rat?