Thrissur is considered the Cultural Capital of Kerala given its history and numerous museums, cultural institutions and art centers. It seemed more than appropriate to check out the Archeology Museum after breakfast before the heat became oppressive.

The name of this city also considered to be a derivative of the Malayam name meaning “The Big Town of Lord Siva” which seems fitting given the Vadukkanathan temple is the centerpiece of town. Of course we had to pass it on the way to the museum. Your ticket into the temple is being a devotee of Shiva or having brown skin. Therefore I cannot confirm the presence of be a linga, a stone phallus representing Shiva covered in a mound of ghee, like butter. I was able to peer through the entrance to see a man standing on a ladder hanging the lanterns outside for what I supposed is for another festival. As we rounded the edge of the temple, there was an enormous elephant-sizedg hole in the barrier wall easy to gauge since I could clearly see the temple elephant standing only a few meters away on the “other side” with nothing to stop him from charging us other than his focused attention to eating breakfast. Fortunately, I had snack food on hand for hungry creatures mainly my boyfriend and knew I the temple elephant was trained to give blessings with his trunk in exchange for food. Through the large hole in the wall, I caught another glimpse of the temple. 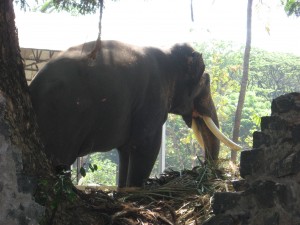 The archeology museum, Sakthan Thampuram Palace, was a former palace of ruling royalty only costing 10Rs for entry. I felt it should have cost more due to the sizable staff available in each room eager to share their knowledge. The men who greeted us at the entrance asked where we were from. One guy got really excited when we said we were from The States and cheered, “OBAMA!!”

There were several impressive exhibits of bronze and copper. I was most intrigued by the Buddha images like no other I have seen thus far from Afghanistan looking more Greek with the Buddha sporting a toga and loose flowing tendrils.

There was a peaceful garden adjacent to the palace filled with butterflies and canopied with jackfruit trees. Alex & I sat on one of the benches for a bit and soaked up the beauty.

Leaving the museum, I felt happy and at peace. As we left through the front doors, a group of schoolgirls on their way in eagerly waved at us. One brave girl, Hildi and her 2 friends approached me, shook my hand, said hello and asked where I was from. They were so cute in their braids and crisp navy and white uniforms.

It is strange I think the women are so beautiful but they say that I am. Each party thinking the other is exotic. We always want what we do not have.

The women were not the only ones with beauty. As we took a different route back passing beautiful and enormous homes. Where is all the money coming from? Later I found out Thrissur is also called the Entrepreneurial City due to a large number of entrepreneurs in various trades.

Alex & I swung by the bus station to inquire about buses to Fort Cochin. The man said, “Always. Every hour. Every day.” Across the street was a building that looked like a Thai building with steep sloped tiles roofs but is typical Keralan style. My assumption is the buildings are built to survive the elements. Here buildings get pounded by heavy rains during the monsoon season much like Thailand.

This town is great! I enjoyed being off the tourist trail. People are friendlier and eager to ask questions. However, I am excited to get back on the trail to get some book exchanges, internet cafes equipped with Skype and laundry. Alex, who is also known as Patrick shared my fondness for the city as well. It was not surprising a man of many names and personalities would like a city with multiple names.