It felt so good to sleep in. Sleeping in meant waking up at 8 rather than 5AM. Our guesthouse offered free breakfast. I never know what to expect when it comes to free breakfast. Eggs? Fruit? Dry toast? This morning I was pleasantly surprised to get waffles. Afterwards, Alex & I switched rooms to a nicer one overlooking the courtyard.

Our morning trek included dropping off laundry, checking out the market and heading up to the top of the Vertical Runway. The trip to the market was satisfying because I was able to find a stick of deodorant which is a necessity now that we were back in oppressive heat. Alex & I found some English workbooks to send to the school we visited in Lak Sao. 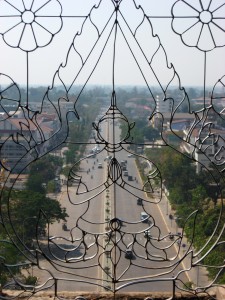 The sun was shining bright. It was still relatively early in the day but the heat was oppressive and I was drenched with sweat. Thank God I picked up some deodorant. On the way to check out Patuxai the monument of many names: Victory Gate and the Vertical Runway, we tried to walk under cover of the trees that lined the main thoroughfare. Once we got the monument, we climbed 3 flights of stairs to the top providing a lovely 360 degree view of Vientiane. There seemed to be more trees in Vientiane than in the eastern region we passed along the 6 hour drive to the capital. Patuxai was worn for wear looking like it needed a good power wash and a touchup coat of paint. The rod iron window gates were designed in the shape of The Buddha.

Since it was so freaking hot, we were not very ambitious. Once it hit noontime, we ate a bowl noodle soup and headed back to the hotel to escape the heat and literally chill out for a while. Alex napped while I wandered in search of a book exchange.

The heat was not the only thing making Alex & me ornery. When Alex & I dislike a town, we tend to argue more.  Neither of us were feeling Vientiane. The town is crumbling and unimpressive. I was thinking since it was once also influenced by the French it would be like Hanoi. Not so. Unfortunately, Vientiane reminded us of a more rundown rendition of Chang Mai, overrun with too many smelly and unkempt backpackers. Given the amount of free time and access to hot water here, I do not understand why backpackers have such poor hygiene. 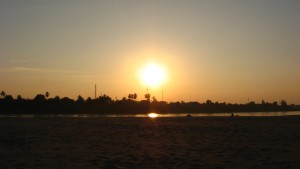 Once the sun dipped down towards the horizon, Alex & I came out of hiding and took a romantic sunset pilgrimage. We trudged across a soft silt bed to the edge of the not so mighty at the moment Mekong River. The dry months in Laos are from December to April and it was apparent since the river was reduced to a trickle. Near the muddy areas, there were millions of small frogs. 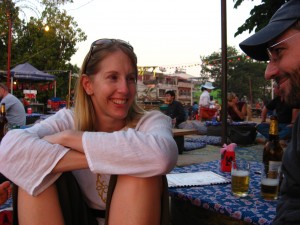 Dozens of “waterfront” food stalls & platforms lined up along the banks. When we got back to the shore, we drank a Beer Lao while watching the sun set. Alex spotted a lady selling cuttlefish. After hanging out in Hanoi drinking Bia Hoi, he has come to enjoy cuttle fish. The vendor was only trying to catch the attention of other Asians and ignoring him. With effort, Alex finally flagged her down to order one but he was disappointed it did not taste the same and passed on another round. I tried a bite and it was like chewing on rubber. I spit my piece out into the sand for a eager furry 3-leg beggar to gobble up.

We ordered another round of Beer Lao, my new favorite beer. I wondered if it was because I found it tasty or the fact it made me forget about the unpleasant aspects of Laos. Right now I was happy with a bit of a buzz watching the sunset with a gentle warm breeze blowing. This is why all the smelly backpackers come here. I was thankful to not be downwind from any at the moment.