The roosters roused me from my slumber for the sunrise. The cool weather this morning was welcome. The cold shower, not so much. Since we enjoyed it so much yesterday, Alex & I went to the same place for breakfast. The woman recognized us and made eggs without us having to ask.

The mamasan at the No. 4 guesthouse shared with me her secret shortcut to the bus station to keep us from having to take the round about journey. It took only 5 minutes and cost nothing. On the way, we passed a group of guys watching a rooster they had just released from it’s cage, an inverted wicker basket.

Even though trains ran from here to Chang Mai, we took the bus for the 4 hour journey since they came more frequently. Arriving in Chang Mai, there were tons of touts wanting to overcharge for a short ride into town: 80B.I negotiated with a tuk-tuk for 60B. We still payed too much but it was at least 20B less. However, I was excited since this was our 1st ride in 1 in the city. It was kind of scary at first. The vehicle felt unstable. It zipped in between other larger vehicles quickly, coming closer than my comfort level. I laughed with Alex, keep your arms and legs inside the vehicle while it is in motion. 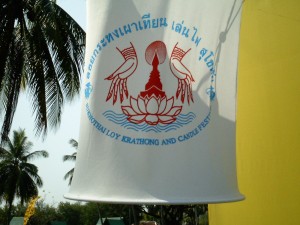 Alex & I felt better about being lame last night by not going to the festival. Tonight is big night of the festival. Yay! We hadn’t missed anything. It seemed appropriate to celebrate the 1st night of Loi Krathong in the Sukhothai, the origin. And spend the last crazy night in Chang Mai.  As we walked around getting acquainted with Chang Mai, we saw the Thais preparing for the evening: hanging lanterns and getting ready for the parade.

As soon as the sun went down, all hell broke loose. Paper lanterns floated up into the night sky while small lotus shaped floats made from flowers, bamboo and banana leaves were lit and launched to float downriver. It was beautiful and tranquil to watch yet the sense of peace quickly was offset with explosions. Attached to the tails of the lanterns were firecrackers that added to the dramatic effect.

Fireworks, both official and unofficial, and firecrackers went off everywhere. The angelic children from yesterday turned into little devils as they threw firecrackers at friends and passersby. On a rooftop of one hotel, teenagers shot fireworks at the people on the sidewalk, forcing us to take cover. A Western couple tried unsuccessfully to launch a lantern but it got caught in the awning of a nearby restaurant almost setting it on fire. I am starting to think maybe the Burmese did not burn down Ayutthaya, I’m thinking the Thai’s did it during one of their parties.

Even after 2 months in Asia, we still find new things to eat almost daily. In the past week alone I have tried a bright green sour guava, papaya salad with crushed up crab and shrimp, corn with coconut and sunny side up quail eggs. Alex has tried buffalo on a stick, Thai sausage, and soup with chicken feet. Tonight a new item was added to the list which can only be described as big fried cricket. Alex ate one and smiled, “Try it. It tastes like fried calamari with a jelly bean in the center.” I tried one. It was horrible and tasted nothing like his description. Even worse, a few of the legs got caught in between my teeth. Gross, I would much rather unknowingly eat the bugs in my rice. Alex thought this was hilarious.

Crossing the bridge to the other side, things were a bit more tame. That is, less people trying to blow my arm off. The buildings and the trees provided a buffer from the winds making it easier for people to launch their lanterns. With the full moon in the background, it made me feel like it was Halloween. Except, there were no witches flying on brooms, just a million fairies floating into the sky.

The parade started out a little chaotic but then it turned into typical Thai elegance. The floats were elaborate and actually designed to float. Men carried them as young Thai women gracefully waved and wai’ed to the crowd. Of course this was all accompanied to music. Drums & dancing. As I watched the parade, Alex watched the procession of freaky farangs and sleazy sex tourists. 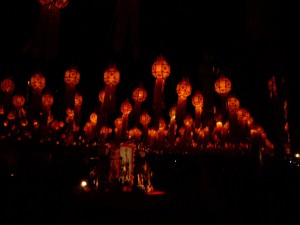 There were more lanterns hung and lit in the central square. Music composed by the King played. Lanterns continued to be launched by the hundreds into the full moon sky. As they floated into the sky, it was almost as if they were floating to the music. The whole scene was surreal and peaceful. It felt like I could be watching a scene from Fantasia.

The sound of thunderous explosions continued through the night, and for once I was happy to be in a soulless but flameproof cinder block building.