After picking up some groceries yesterday, I had coconut granola and blackberry yogurt to fuel me up for my AM run. It was early but already hot and humid. Ugh! Two parts of me hated me this morning: the one getting her ass kicked and the endorphin junkie who had not been getting enough of her fix as of late. 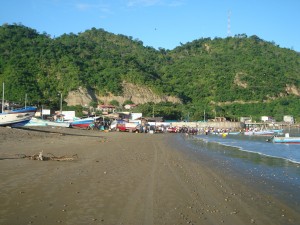 Puerto Lopez is an important fishing village. Signs clearly visible were the scores of colorful wooden fishing boats floating on the water or dragged onto shore. Discarded fish were scattered along the beach as gifts for the vultures. The beach was rocky and on the muddy side. The sand dollars washed up along the shore classed it up a bit. The southern cliff that framed the beach looked rather spooky the way the fog hung low along the breaking waves. I did not make it all the way there since a lady was walking with 2 dogs that wanted to eat me for breakfast.

I turned around and ran in the opposite direction towards the boats. Between 6-8AM, there is a lot of action at the docks. The fishermen come to shore with their catch and there are plenty of people there to receive them. This is a bustling fish market. People buy for either personal consumption or for their business.

Sweating buckets, I returned to shower. Even after a cold shower, I was still sweating buckets. Ok, I am now ready for the cool Andean air in Cuenca. Sweating more profusely as I walked to catch the next bus to Guayaquil. I thought the direct bus for Guayaquil left at 9AM. At little after 8:30, it was waiting along the side of the main street. It left at 8:45. So was this the 9:00 bus leaving 15 minutes early? No, it was probably the 8:30 leaving 15 minutes late.

Sitting now in my usual shotgun seat. The driving is not as crazy as in other countries. I like this seat because I can get on and off quickly to pee, for security checks and of course if there was an emergency. Plus, the ayudante can watch my back. Also, I can see everything to my right and in front of me.

We passed and paused in Jipijapa. The name of this town sounded familiar to me. It is another name for a Panama hat and one of the centers of trade for them. Kind of fitting to stop here since my final destination, Cuenca is where some of the best hats are made. I peed and picked up a plantano asado con queso. Returning to the bus, I passed a guys carrying 5 chickens hanging by their feet, they were still alive.

The bus continued it’s journey. Lively music played, a combination of Music Daddy Yankee genre and Oldies. “Wake Up Lil Suzy” was playing as we winded along the roads through construction. The men were working on adding building guardrails. This was an area I would not be concerned with lack of guardrails. The road was not up high enough. If the bus rolled, it would only turn over once. 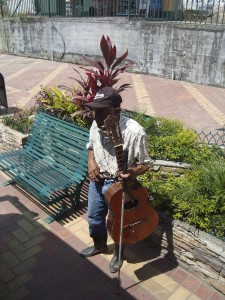 Sitting in the first seat, I had several seat mates come and go. First was an old lady who slept so soundly, I was concerned she had died. The next was an old blind man who serenaded the bus while playing his guitar. Then, when the seat became vacant a man tried to take the seat without even asking. I stopped him, “Lo siento, este asiento es solomente para mujeres, ninos o inválidos.” A lady sat down with her son. The man had several other vacant seats to choose from but sat across the aisle staring/glaring at me. Yes, I would have been more comfortable space-wise having him sit there. Three people, kinda crowed, but at least no one tried to fondle me. I knew my quick assessment of his intentions were well-founded when he called me puta as he got off the bus an hour later. What a gentleman!

The enormous Guayaquil bus station was much easier to navigate now that I was familiar with the setup. Ticket. Check. Bathroom. Check. Cappuccino. Check.

Within 20 minutes, I was on the bus headed to Cuenca drinking my cappuccino. The cappuccino was good but not the best idea. The AC was not working. Sweating again! I felt bad for the guy sitting next to me, I hope he did not think I was usually the stinky traveler. This and my earbuds helped me to avoid conversation. My assessment, looked like he was of higher class and appeared harmless. However, with a 3 hour ride ahead of me, I did not want to chance it. Why couldn’t he be a she!

Turning on my iPod, I was able to tune out the sales pitches from the 3 vendors that boarded the bus at Guayaquil and waited their turn. The movie came on: Expendables. I have had no desire to watch this movie on 3 previous rides. I opened my book.

Ah. As we ascended to higher ground, the lack of AC no longer mattered. It became cooler. So much so, everyone started putting on extra layers, including myself. The scenery was absolutely stunning. Luscious green mountaintops with some jagged rocky cliffs that would poke through. A wispy layer of clouds grazed the tops. Little lagoons were nestled in between some of the shallow valleys. The mountain peaks reminded me of the Grand Tetons in Wyoming that my best friend used as a backdrop for her wedding ceremony. However, I was not in Teton National Park, I was passing through Cajas National Park. Only 1 gorgeous hour left until Cuenca. 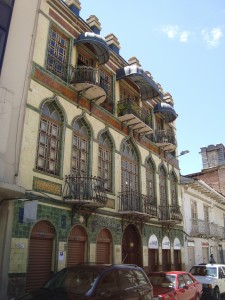 Cuenca is the 3rd largest city behind Quito and Guayaquil. Unlike the other 2 cities, I immediately fell in love. Cuenca was more charming hands down!! The past and present mixed together well with the mountains adding an extra elegance. I felt like I had returned to my former home in Old Towne Alexandria. Some of the tall brick buildings looked like the ones surrounding Braddock Station including my dear Meridian at Braddock Station.
The cab driver was sweet. He did not overcharge me and he gave me a mini tour on the way to my hotel. He told me about the weekend’s festivities for the festival. I had read in “the bible” about the founding of Cuenca. The celebration of their freedom is celebrated April 10-13th. Traveling, I tend to forget what day it is let alone the actual date. Duh! I was coming into town for the festival. It was extending into the weekend. 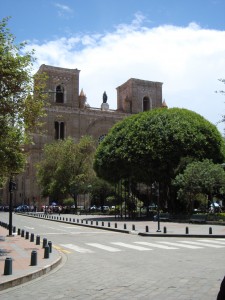 I checked into the Hotel Majestic and my private room held up to the name. Large room, wooden floors, tall ceilings with a window overlooking the street below. First priority was to get to know my private bathroom. The shower was the nicest yet. This is a perfect shower for all your female needs an upright shower with a built in bench, detachable shower head, warm water with excellent water pressure. I was a very happy and squeaky clean girl!!

On my way to check out the festivities, I stumbled upon a grocery store. My rational side told me to pick up water. Since I had a fridge at the hotel, I also picked up some yogurt and granola. On the way back, I bought fresh strawberries from a street vendor getting ready to pack up for the night. On the way back, a local lady actually talked with me as we walked along the street.

I dropped off my purchases and made my way to the main square. The festival was in full party mode. Food vendors were tempting passersby with the delightful aroma of the food being grilled. I picked up some grilled corn. There vendors selling fresh ice cream with cones every few feet. There was a antique car show. Music was pumping through the square and people dancing in the streets. People were happy and the energy was positive. I love this place and was happy to stumble upon it at a good time. Thank you, serendipity!