Ugh! 5:50AM! Too early! Showered, packed and checked out in record time. By 6:20, my butt was planted in the seat of taxi headed for the Cruz del Sur bus station. I did not get a 7AM bus. Even better, I scored the direct to Ica at 7:30, saving one hour of travel.

This allowed me time to grab a luxurious breakfast of toast and a papaya juice. Finally, I am bringing back color to my diet. However, the smell of papaya made me nauseous. Was I still sick or did I find the smell repulsive after hearing Lana and Wytse’s papaya story? Which option was worse?

Waiting to board the bus, I encountered a familiar face: Adi, the Isreali chick from Kokopelli. We updated each other about the past week. Out of politeness, she invited me to join her at the next hostel. However, it was on my list of places to avoid. I declined, I was all about the private room now. I wanted no part of being surrounded by more gringos, sleeping in a dorm nor the hostel party scene trying to compete to be the first person put on the liver transplant list.

Yay! Ask and you shall receive. Thank God! It was an old Peruvian dude seated next to me and not the dreaded crazy bitch. He was sweet and quiet. I had an Austin Power’s moment when I could do nothing but stare at his large and suspicious-looking mole behind his ear. I wanted to cut it off and get it biopsied. Moley, moley, moley!!

The bus did not rock enough to put me to sleep. Also, I saw a pretty horrific accident with a semi truck loaded with all sorts of heavy industrial equipment. Really? Did me being awake improve the safety odds for this trip? I’m thinking no. I stayed awake and watched the movies on offer: “Cop Out” and “Colombiana” en Español por supuesto!

At Ica, it was only a short ride to Huacachina. I hailed a taxi. The driver offered, “Seis.” I said, “Seite, oh no no cinco!” He laughed, either was fine with him. He dropped me off at El Huacachinero, a place I spotted on Hosteltrail.com. The listing mentioned a private room (without bathroom) for S.35. I thought it would probably be a little more, perhaps S.50. The lady showed me on the calculator (obviously thinking I was too much of an idiot to understand Spanish) the price: S.142. Wahoo! “Para tres noches?” Her, “No, cada uno.” No WiFi. No discount. No deal. She was indifferent when I notified they needed to update their website or honor the price. Fuck off? Back atcha bitch!! I sent a memo to Hosteltrail.com and am writing it here: DO NOT GIVE YOUR BUSINESS TO EL HUACACHINERO!! The only thing really going for them was their pool and pool deck (read further and you will discover a superior option).

Next place. The staff was friendly. The private room was crap. The pool was decent. No WiFi. S.60. No, holding out.

Next door, at Sand & Lake. The staff was also really friendly. They had a private room for the same price but the room was as shabby as the other with no light. Like other hostels that like to say they have a “pool”, they did but it was the size of a puddle and about as hygenic to swim in. Yes, WiFi.

They still had to clean the room, but would it really improve the appearance? They told me to feel free to leave my pack and check out the laguna. I did as I was told, plus searched for a better oasis in this desert. 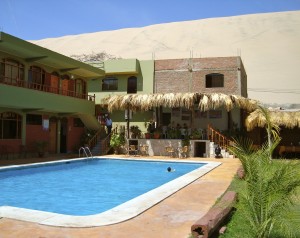 I rounded to corner to see HI International. Oh FUCK NO! (Even though I do love the HI chain, they never disappoint.) In my hostile state, I needed not to be staying in a hostel environment

Peeking into the hotel next door, HOTEL CURASI it looked expensive. It had a large central courtyard with a large pool (bigger than the El Huacachinero) that could fit more than 2 people at a time and you could, gasp, do laps. There was a large covered deck al lado the pool. The lady showed me the large private room WITH bathroom with WiFi available inside the rooms and courtyard. All for S.60. I wanted to hug my new friend. Um Yes, Yes and Yes. TO top it off, I was the only gringa! All the other guests were Peruvian. Fantastic!

Next. I quickly: reclaimed my bags; grabbed a 7L bottle of water and 2 bananas from the tienda; donned my bathing suit and jumped into the pool. However, I ended up having to throw in the towel. The 1:30 sun was baking me alive after only 5 minutes post-dip.

I retreated to my lovely private room to shower and to take a quick nap. As I dropped into bed, I heard the Bruno Mars song The Lazy Song playing on the pool deck

Well at least he condoned my nap even if I didn’t. Did I say nap? More like hibernation. I woke up 5 hours later. Damn, I missed the sunset. Oh well. Mañana! I wandered to see the town. OK, that took 5 minutes. Not much effort. My tummy rumbled. A little SHITzu growled. The little bastard chased after me, I guess it hadn’t eaten yet. 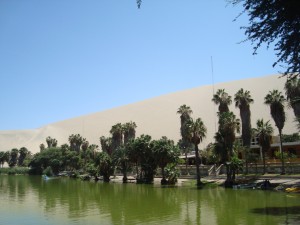 I found a non-gringo restaurant. First full meal! Bring. It. On. My new friends were huevos, frijoles y verduras con arroz. As I waited for food, I watched the passersby. Too funny. It felt like my first few weeks living in SF. When I got there, I only knew 6 people (excluding family) ad I would bump into those 6 people by chance on the streets, on the Muni and other random places. Huancachina. Same thing. Familiar faces. Adi, the Isreali passed, British Chicks from today’s bus. The young chick from Loki Lima that shared my birthday. Yep, but didn’t care and didn’t try to flag them down.

But then, wait. Holy Crap! People that did not suck!! It was Tom and Tara! They were part of the Golondrinitas. I flagged them down! I gave them big hugs and told them I was happy they had survived the Ecuadorian jungle. We chatted and recounted the past few weeks. However, as happy as I was to see cool peeps, I was more eager to actually eat a solid meal.

Tom and Tara left, I returned to the meal that awaited me: arroz con verduras! I asked for salsa picante. The guy watched me as I dumped a huge dollop on my plate. He was worried I would die. I was making sure this time it was Keren: 1 & Bacteria: 0.