Up and out early. I wanted to hop on a Huaquillas-bound bus ASAP. Crossing borders can be a major pain in the ass. The earlier I start the better. I did not bother with a proper breakfast. There was a place on the way that was like Jamba Juice. Since it was banana country, I picked up a banana yogurt smoothie for the ride. It was surprising to not se bananas being sold everywhere. Like Colombian coffee, they were most likely shipped in bulk to the highest bidder.

The bus was about to leave but paused long enough for me to hop on. I told the ayudante that I wanted to go to the immigration office, 5K out of Huaquillas. As I paid, he said, “Si, directo!” So, I was not dropped off as we passed the building along the way. In Huaquillas, I ended up having to backtrack via taxi.

On the way, the taxi driver asked about how in Ecuador. Soon, he asked the usual question. “Casada?” In Spanish I told him no, I was not married but I was engaged. Wow, how my pretend relationship is getting so serious! Persistent and eagerly offering to be my Ecuadorian dude. I went into a long speech essentially to keep him from saying anything else. Pretty much what I said in Spanish was that I was a good woman. There was only one man in the world for me. Not one in each country. Not Ecuador. Not Peru. I am loyal. I am faithful. I am not looking for another boyfriend. At the end of my speech, I made it to my destination. I paid my fare and left without paying him any more mind. I laughed, no more Ecuadorian men!

My exit stamp took less time than the short ride from the bus station. Now, I had to take another taxi to the bridge. I was happy the other driver had left and the new driver was behaved. When the taxi stopped at the bridge, I was swarmed. Several men tried grabbing my bags. I no you don’t. They all followed me. Technically I was in no-man’s land. The Peru aduana was another 3K away. I knew that there had been a war between Ecuador and Peru in the past in regard to border disputes. Is this why both of these countries had their respective aduanas so far apart?

This year so far I have made six other border crossing by land. I was not happy that I HAD to use so many forms of transportation. Border crossings are exhausting for this very reason. Crossing the bridge, I had an entourage of 5 shouting fare at my for their moto-taxis. One jackass started at $6. Others went down progressively: $3, $2, $1. I kept walking, the magic number was actually $.50. Generally, I like to wear the touts out. The survival of the fittest wins. We had a winner, well actually 2. The guy gets my change and I was not about to walk 3K with my packs in the heat.

The custom’s house looked like it was still a work in progress, It was a small concrete building. I entered one small closet to collect and fill out my form and the second small closet to get my stamp.

On the way out, I got approached by a taxi driver. Two others were waiting to head to Tumbes, they needed a 3rd person for the shared taxi. The driver told me 3 Soles. I tried to negotiate, but then I realized, I was actually getting a better price. My research had said not more than $1.50. The rough conversion was 2.65 Soles to a $. Oh, he is being legit. I was the only female but it was all good everyone was proper. The driver did not want to fix the broken seatbelt until he saw the Policia. Stopping for gas, everyone started complaining about prices of gas. The driver gave me shit for trying to negotiate the fare and asked me how much gas was in my country. The good thing about talking politics, men always forget to sexually harass me. Splendid!

The colectivo was ready to leave, I was the last person to join. I gave the guy my pack and watched him secure it to the roof. I join. lady was guarding a large bag that was clogging the aisle and blocking my seat. I asked why she did not put in the roof. No es seguro. Everything in my pack is replaceable. Right now, if someone took my pack and opened it would be knocked out with the massive stench from my fermenting dirty clothes. I would be easily able to track down the thief. At a security checkpoint, I saw the lady had been guarding with here life items made of coconuts. Really? 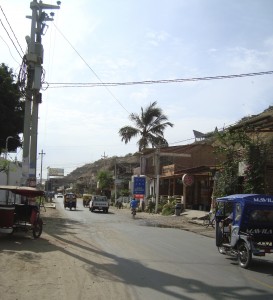 I was surprised, I did not expect Peru to be as impoverished as Ecuador. After looking it up they are at about the same when it comes to poverty rankings. However, I landscape coming across the border was not as rich. It lacked the luschious greenery I had been accustomed to seeiIt looked much like we were passing through the Mojave Desert.

At Mancora, they almost drop me off at Loki Del Mar. They point me in the wrong direction. I tried to ask a guy where it was. He asked my name. Nope. I will find it myself. One I found it, the hostel was full. I could not make a reservation for any of the following nights. I would have to swing by starting at 7AM each day to put myself on the waiting list. Um, no. And no! 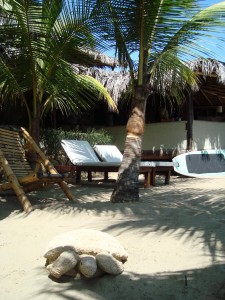 At least the lady gave me a suggestion: Kokopelli Backpackers Hostel. It was a few meters south down the street on the left. I walk down the ocean is on my right. Hmmm. I think I will check out the one on the right, Las Olas. This was a “luxury” hotel costing $26 per night vs. S.26 (~$10). I wanted to be on the beach for at least one day.

Mancora was not hard to navigate. There was the beach and the Pan-American Highway and the one main thoroughfare that connected the two. A few hotels lined the beach but little beach shacks and bars dominated. No longer wanting to be the smelly kid, I dropped off a little more than 5 kilos clothes off at a lavanderia along the Pan-American Highway. Then I walked down the thouroughfare for lunch. For only S.8 I got ceviche to start, pescado con arroz y ensalada plus jugo de manzana. This was not the crappy Mott’s apple juice. This was a juiced apple. OMG! I will have to try this one at home. 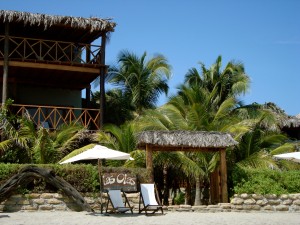 The beach was not going to be added to my top list. However, it had it’s own charm. The beach was filled with surfers (Nice!) but it was also balanced with the same amount of mangey dogs (Not-so-nice). The breaks were pretty sweet. I thought of my brother, having a different type of beach ranking, this probably would have made it to the top for him. The $26 was worth it. I sat a front row seat on an elevated wooden deck watching the sunset over the breaking waves and ripped silhouettes of the surfers. What could be better? Maybe a cocktail in hand? Yes, but this was gratis for my annoying guests, mosquitoes. It was my vodka/apple cider/eucalyptus concoction to keep them from eating me alive.