Deja Vu. Same routine to get to the airport as I had done the week before. Catch taxi to bus terminal $1. Buy bus ticket $1.8. Wait. 45 minute bus ride. Sleep. Get dropped off at the muelle for the less than 3 minute ferry ride for $.50. Grab bag. Jump on gratis airport 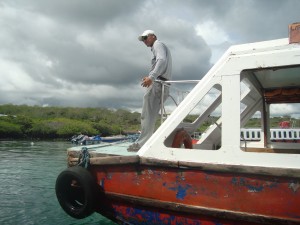 bus. Five minutes later, finally at the airport. I was there at 9:30 even though my flight was at noon. I was hoping that I could get thrown on the 10:45 flight so that I could head directly to Montañitas. No deal. I had to take the noon flight.

Time to kill. There were 2 things I wanted from the gift shops. One, a Galapagos stamp in my passport. Second, playing cards that featured the Islands on one side and each face card had the different land and marine animals on the face with English and Spanish name. I got 2 packs. One for me and one for my niece. OK, that took 5 minutes.

I headed to the cafeteria to grab some breakfast. No desayuno, almuerzo. The lady said there were only carne or pollo options but side she would hook me up with a plato de arroz con verduras. It always helps to ask and add a big smile for good measure.

The cafeteria was packed and there were no empty tables. An Ecuadorian businessman had a free chair at his table. I sat and pulled out my Mac. He talked on the phone. Fantastic! The icebreaker to begin our conversation was when he told the busboy to take away my coffee. Oops, he thought it was his. It was nice to have a man more enamored with my laptop than with me. Since he saw my Mac, he had to show me his. It made me think of a Total commercial. His name was Javier a 60ish retired captain. The first part of his career, he was the captain for overseas container ships. Then, a captain for one of the high-end cruises in the Galapagos. 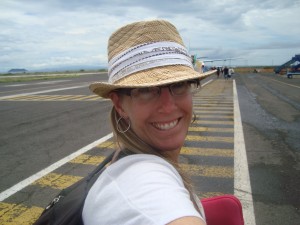 Finally, a gentleman. This is the first interaction with an Ecuadorian man I have enjoyed. He was intelligent, well-traveled, speak excellent English and helped me with my Spanish. He did not ask me the top 2 questions: Do you have a boyfriend? and regardless of an answer yes or no Would you like an Ecuadorian boyfriend? Quite refreshing. We talked about world politics. I was more interested about what he had to say about his own country. Dollarization was apparently a hot topic, so I asked him about that. He told me about all the changes in the past decade. How the government was changing for the better. 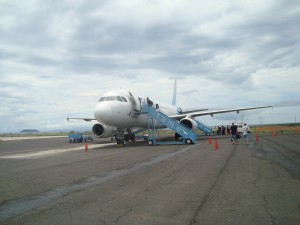 Our conversation ended abruptly when I heard my name over the loudspeaker. This is strange. At the TAME counter, I identified myself. “Venga”. Where are they taking me? Am I getting a body cavity search? Whew, no! It was just my backpack that was getting poked and prodded. They asked for me to remove the items in the side pockets to ensure they did not get lost.

Theoretically, the flight was supposed to leave in 15 minutes. No indications that we would be boarding any time soon. Delay. The plane was 3rd in line on the tarmac which I could see from the open air waiting area. After the two other planes took off, it was our turn. Going through the gate, I was instructed to follow the yellow lines painted on the tarmac to meet my plane. Follow the yellow brick road not leading to home, to a wizard or Kansas. Guayaquil. Getting to my seat, I was super stoked to get the coveted exit row seat for no extra charge.

At 4:20, rather than getting high, the plane landed in Guayaquil just an hour and fifteen minutes late. Montañita was another 3 hours away. I figured after getting my bag, and finding the station it would be too late to make the trek. Montañita mañana! At the baggage claim, I picked up my pack. OMG! Heavy! Too much shit! Did my bag mate with another while delayed at the Galapagos airport?

Grabbed my bags and some cash. Now, a taxi. A simple task ended up being a pain in the ass, First, I tried to get one in the queue outside the airport. They wanted me to pay $6 for a 2K ride. No! I walked to the road in front of the airport. The taxi’s that stopped had no idea where my chosen hostel was despite my speaking slowly and giving the m the address. Ugh. Fine! I will pay $6 so that someone will actually know where to take me. Before I made it back to the queue, another taxi driver stopped me. Yes he know where I wanted to go and would take me for $4. About to put my bag in the boot, an another guy flashing credentials, yelled at me. No seguro! No seguro! I guess the first guy was poaching licensed airport taxi’s. To settle the dispute, I did not take a ride from either of them. Back at the queue, I finally got a ride for $5.

I was dropped off at Dreamkatcher, a hostel closer to the airport and bus station. After hearing Guayaquil was just as sketch possibility sketchier than Quito, I just wanted a place with WiFi, a cold shower and good bed. No explorations of the city for me. I just wanted to explore the web at warp speed! The pictures that failed to upload in Santa Cruz were quickly imported in less than 5 minutes!

For dinner, I only walked down the block. There were not many options but I found one that appealed to me: yucca and yogurt. There was an odd place that sold combos of yogurt drinks with a selection of carbs to choose from: papas fritos, pan de yucca and salchipapas. This was an odd combination. I selected a mora yogurt and 6 papitas de yucca for only $1.40.

The hostel was nothing but females who kept to themselves. Everyone was just killing time to catch a bus or flight for the next destination the following day. Time to kill in Guayaquil!