It was sometime after midnight when I was rudely awakened by the female sitting next to me. The end credits were rolling on screen and sharp elbows were getting repeatedly jabbed into my spine. I had been, until now, folded into my crazy 8 sleeping ball within the confines of my seat.

The female seemed to be having a hard time getting comfortable. She elbowed me and shoved me. Next, pushing her back into me as if she not only wanted her seat but mine as well. Then, started shaking me, “Excuse me. Excuse me.” I remained in position and turned my head to look at her and looked down. My back had been touching the armrest but she still had enough room to put her entire arm on it. The remainder of of my body was within my assigned seat without threat of crossing the borders. Her ass was pushing the limits! Without a word, I turned my head and resumed it’s position: resting on my knees and pillow.

She then continued using the full force of her back in attempt to smash me into the window while informing me I was a “typical selfish American”. OK, not only did she wake me up but now pissed me off. What the fuck? Typical American? What? First, she was the fat chick with ample cushioning. Second, I had yet said a single word to her so I could not fulfill the loud American stereotype. The only evil thing I had done was purchase a ticket and get assigned the unlucky seat next to this crazy bitch. What was her deal? Did she just hate all Americans? Was this her sport, attacking Americans as they 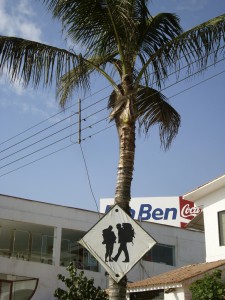 slept? Was she jealous I could sleep soundly on a bus? Did she want to see how I turned myself into a piece of origami? Was she off her antipsychotics?

I was mad. “Are you pulling this shit because I am an American? Would you do this to a local?” No answer. I continued, “You can rest on me like a local would but you cannot assault me. If you cannot sleep on buses, this is not my problem. Take a breath. Take a sleeping pill. Chill out!”

Another insult, “I don’t take pills (sounding self-righteous). I am not an overmedicated-American.”

Did she want to see an asshole American? Was she not going to rest until she did? I do not like to unleash the bitch but since she successfully woke her up, she came out in full force. “Listen fat-ass, I do not know or care what nationality you are because you are most likely a poor representation. If you are too fat to be comfortable in one seat, they are inexpensive enough, pay for two. Being a racist or having a judgmental bias toward the person you are seated next to doesn’t give you the right or permission to behave like a terrorist (figured she would appreciate an AmERican using that word). You need to conform to the usual norms for a bus, plane or train.” I lifted the armrest to a 45 degree angle. “Since you cannot share an armrest, you no longer get to use it!” I finished, “If you touch me or assault me again, I will take actions extreme enough to get both of us kicked off the bus and inside a police station! DO NOT FUCK WITH ME FOR THE REST OF THE NIGHT!!” I stared her down with crazy eyes. She sat stunned but shut up. She then slid her fat ass as far away from me as she could.

I turned around. Adrenaline was surging through my body. I wanted to cry. I am not this person. Fucking bitch for pushing my buttons. Go back to sleep? No fucking way! She will probably slit my throat. The bus was packed and I could not switch seats. I also felt like the others thought I was the asshole and hated me for raising my voice in the middle of the night.

Generally, when it comes to fight or flight, as a runner, I opt for flight. There is only one time in my life that I have ever used force. I was in High School. A boy had just broke up with me and broke my heart when he told me I was only a rebound and he was getting back together with his ex-girlfriend. I took out everything I was feeling on the inside and ended up breaking the driver’s side window of my mother’s car. I was stunned that much force could come out of me. Never, have I wanted to tap into this. Never against another human being, The thought of having enough power to inflict harm freaks me out. At least, in danger, I know I have it in me. I am just thankful I think before I act.

Finally, around 3 AM, the bus stopped at Chicaylo to offload several passengers. The seats behind me were vacated. I grabbed my bags and tossed them behind me and climbed over the back of me seat to escape being so close to the psychotic bitch.

I was able to go pee and go back to sleep again but not soundly.

At the final stop, Trujillo, I woke up again. I was happy to make it to Trujillo without any more incidents. The ride had taken just over 9 hours. The bitch kept her distance. I got off the bus and grabbed my bags. A taxi-driver offered to drive me to Huanchaco for S.20. The fare should be S.15. I counter-offered. The driver did not budge but I did. No conflicts. No drama. It was a brand new day. He could have the $1.50 extra. I just hope he uses it to spend a little more on something pretty for his wife or daughter. Just get me out of here.

Once to my destination, Hotel Naylamp, he was kind enough to carry my bag to reception. I got my private room, my key and my bed. From 8:30 to noon, I slept very soundly without risk of attack from rouge bitches.

The beach looked a lot like Daytona Beach with a pier off in the distance. However, instead of being surrounded by White Trash, I was surrounded with actual trash. Plastic bags, bottles, cups and tires!! The waves were pounding the shores. As the tide retreated, if I closed my eyes and just listened to the sound of the water running over the rocks, I could have been back in Dover, England. 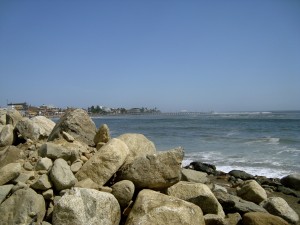 Huanchaco beach was dominated more by locals than the gringos. As it should. Wow, I was surprised and happy to see Peruvian couples walking along the beach hand-in-hand or arm-in-arm who paused frequently to kiss. Local surfers walked along with their boards. Teenagers hung out. Children ran around or played in the sand. There was also a random clown. And another dude wearing a dress with coconut strategically placed as boobs and to enhance his butt.

The tranquila vibe of the playa was exactly what I wanted and needed. Along the malecon, there were several little restaurants. One with the menu scribbled on a chalkboard caught my eye. I grabbed a table outside to watch the scenery and enjoy a late lunch early dinner. A man attempted to come to talk to me but the large lady who owned the restaurant intercepted him and send him on his way. She was immediately my best friend!

The meal was good. The lady at the caja tried to overcharge me by S.2. Since I had only enough for

the proper amount I paid and offered to return with the rest. She wrote up a new check and said, “No problema.” Si, no problema.

Back at the hotel, I swung in the hammock in the courtyard listening to the sounds of the birds chirping. Tranquila. I dragged myself out of the hammock for a change in venue. It was almost time to watch the day come to a close. Next door, I grabbed a table and large Trujillo beer (brewed in the adjacent town) and took in an amazing sunset. Tranquila. Even after the sun dipped below the horizon of the ocean, the light show continued in the sky. CNTL+ALT+DELETE. I had been reset. I was back to my traquila state.

Tonight, I slept safe and sound soothed by the sound of the repetitive surf.