I was up a wee too early for the free breakfast but it gave me time to get ready before all the other chicks woke up and enjoy sitting in the lovely courtyard. There were several pet cockatoos singing to me and the sound of the fountain flowing into the “pool” was a very soothing way to start the day. The peace was broken once the doors of the office opened up.

An employee was meeting starting up. The douche owner was reaming out the staff for minor infractions. He was also told them no late check-outs for ANY reason, even if someone arrives at 4AM. Quote: “Their lack of planning is not our problem. They pay for a full night and if they want to stay longer, they pay for another day.” I understand he has a business to run. It took everything I had to not inform him of the reason why I chose this hostel. If I was staying a few days, this would not have been my choice. This is a “I don’t want to see Guayaquil & need a place close to the airport/bus station to sleep with WiFi before I leave again within 24 hours.” In India, many places were on the 24 hour system: check in at 4PM you check out at the same time or pay another day. If I wanted to start a hostel in Guayaquil, I had a plan. I would open it within a block of this asshole, run on the 24 hour system, be kind to my guests and kind to my employees. So, because the owner is an asshole, DO NOT STAY AT DREAMKAPTURE go somewhere else. If you are in a total bind, minus the douche, I was happy having a good bed, shower, breakfast and extremely fast WiFi.

Sixteen hours after touching down in Guayaquil, I was back in a taxi headed to the bus station. The station was massive: 3 stories. Why is it when I really do want help, there is no one yelling at me to tell me where to go? It took a while for me to find the ticket counter on the ground floor in the back corner. Man, I missed the Central American way of just hopping on a bus and going. I found a counter, bought a ticket and the bus left 7 minutes later heading on the direct bus to Santa Elena.

Not only was it direct, it also had ice-cold AC. Again, I was assigned the shot gun seat behind the ayudante. Although this was a direct bus, we made 3 quick stops. First one was a police checkpoint. Everyone had to get off the and get their bags searched. The other stops were per the ayandante’s agenda. First he picked up a gallon of yogurt and then 3 bags of humitas from food stalls along the route.

The roads were very good: smooth and swift. Before I knew it, the bus dropped me off just before we reached Santa Elena proper at the intersection on the Ruta de Sol (also called Ruta del Spondylus). I had time for a quick pee before my bus pulled up. Perfect timing, especially since it was noon and I was not looking forward to waiting in the noon day’s sun.

I boarded the bus and several vendors followed me. It was strange to see that they were all wearing official long sleeved embroidered shirts stating they were “official”. Touting: Jugo, coco, papitas. I stopped the man with the papitas. He gave me one in exchange for a quarter.

The Ruta was sunny indeed. The old bus did not have AC which was perfect, I could inhale the fresh ocean air. This was a retired luxury/direct bus. The seats were worn for wear and the spot that usually houses a TV was empty. The hour ride was $1.50. I handed the attendant an older non-ripped $5 bill. He gave me change but then after inspection, he thought it was to old to accept. I could have paid with the correct change, I just wanted to break my bill. My rule, if the transaction is finished, tough! This is were I pretended not to understand. Now, it makes sense why the $1 US coins are used more than the dollar bills.

As we headed North along the Pacific, the scenery reminded me of one of my favorite southern routes along the Atlantic Ocean: A1A from St Augustine through Flagler Beach to Ormond Beach. The Ruta de Sol had long stretches of sandy beach bordered by sand dunes and fishing boats. Driving along the Pacific Coast in California you see beaches below rocky cliffs. It was hard to believe I was on the same coast albeit much further south and on a different continent.

Within an hour, I arrived in Montañita to search for accommodation and a nice patch of beach. Squaring away accommodations took more effort than anticipated. My first stop was based on a recommendation from someone I met in Quito: Tiki Limbo Hostel. They do not have singles, only doubles for $30. Hmmm. I asked for a recommendation for a place that catered to singles (without charging them double). “Todos cerca”, pointing to the Hostel Papaya next door. Next door, same deal. Not worried, third time is the charm, Hostal Montezuma! Nothing, but the unattractive dude said I could stay with him in his room! Um, N.O.! Serenity now! Starting to get a wee annoyed.

Last place. Just right! Almost. I had hoped to find something between $7-10 per night. Beggars cannot be choosers, I got a room for $17 at Majagua Boutique Adventure Hotel. For this, I scored a balcony with ocean view, private bathroom, WIFI, AC, TV and 4 beds to choose from in my room.

Prior to lunch, wanting to mail my gifts, I asked the receptionist: “Donde esta los correos?” Receptionist: “No aqui.” Pulling out a map, she showed me, “En Olon.” Scratch that!. Time for lunch! Quickly, I ate and set off to explore the beach.

The beach was a’ight. Foreigners and hawkers cruised up and down the sandy strip. The hawkers with sunglasses saw my cracked Raybans from a mile away and targeted me. To give them credit, at least they were selling a useful item. I smiled every, “No gracias.” A few of their friends were not selling anything immediately useful (at the moment or portable goods). Who buys a lamp or hammock while sitting on the beach? A lamp? Um, we have a bright yellow orb illuminating us right now, gracias! I wanted to suggest they find another item to sell like sunscreen, aloe or sarongs.

Down the beach, I spotted cabanas that were supposedly sweet and cheap. When I inquired about the following night, maybe more. He said, “$25.” Me, “Hay discuenta?” Him, “Solamente para dos semanas o mas.” OK. So this town caters to people who set up shop here for a while. After only a few hours here, I did not see the allure or draw despite TRYING to keep an open mind. The beach would have to be of Tortuga Bay’s orgasmic status to deal with some of the annoyances for such a long time. Montañita is 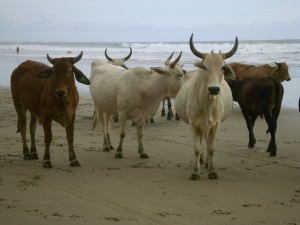 not my version of paradise. There was no functionality or substance beyond tourism. No Post Office. No grocery store.

Weird. All day my brain has been trying to process: Where the hell am I? Florida? No! India? No! Ecuador? Hmmm, I guess! Montañita, Ecuador reminded me of Goa   .

Goa, you ask? Yes. First: cows on the beach! Ah vacas how I’ve missed you! Second: foreigners trying to pose as hippies making sure they emulated/ carried something found on the checklist (sample):
*Anything with the OM symbol
*Traveling with a jimbe (or you were but sadly it was stolen)
*Dreadlocks, hairy armpits/legs, body oder or any modern hygeine faux paux that says you just have other more pressing things on your mind
*Plugs, piercings and tats
* 2+ items of indigenous woven clothes or accessories (usually worn together)
*Mandatory distain of mainstream (although conforming to another group’s standards)
all this to prove you have traveled extensively and are openminded.

The new hotel in construction looked like it could be a new addition to the Taj Hotels. Were the foreigners who have set up shop here trying to create a South American Goa? This was not a mock Goa, it was a mockery! Yes, there were many similar elements. What was missing was the essence. 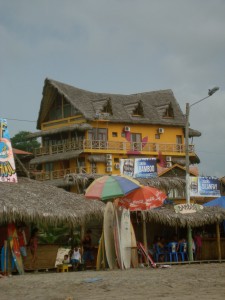 Suddenly, it hit me! It was my Independence Day! Holy Cow Crap! Today, 4 years ago in India, I drank my last lassi with my “ex-husband” of 11 years, before I fled for my freedom and sanity. India is a very sacred place for me while being extremely infuriating and absolutely incredible in the same time and space. I was born in New York and reborn in India.

Maybe because everything else about this place turned me off, I was not up for checking out the party scene. Why? The people who love this place, I had a high suspicion I have nothing in common with. I took advantage of my room with a view to look out upon the waves and contemplate my life. Focusing more on what the future could hold rather than the PASt.