Much like a one-night-stand I was happy to not run into the Lebanese chick the next morning. She had already left. Whew! However, I was happy to see the WiFi had returned. I enjoyed coffee and conversation with the owner in the courtyard. He told me about his holiday, I told him about the race. He laughed at me for following along.

Yoga. Packed. Taxi. Bus station. I was on the move again. Time for a new country. My sights were set on Peru.

Within 20 minutes of being on the bus, I had to pee. The baño was out of order. With a full bladder, I could not concentrate on reading anything. Not my book. Not the Lonely Planet’s information about Peru. Definitely not the newspaper I picked up to read en Español. The only thing I could to was zone out and perform kegel exercises. The brief stops did not allow sufficient time to hop off. 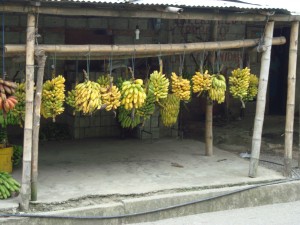 Since I was in a bladder-induced trance. There is not much I can tell you about the ride. 3 hours of my life evaporated with out a trace. There were mountains, rocks, valleys, rivers, green vegetation and loads of bananas. At first, I thought all the bananas were just a hunger-induced hallucination. No. Machala, my destination for today, has named itself the “banana capital of the world”. For good reason, I have never seen so many bananas in my life! Was this why I was stopping here before heading to Peru? Perhaps!

Finally, I made it to my destination. I just wanted to find the closest hotel to upload my backpack and empty my bladder. Just around the corner from the bus stop was Hotel San Francisco. Well, I guess I really was heading back to San Francisco early!

I took a cursory tour of the town mainly to search for an early dinner. Since the town was kinda grungy and sketchy, I did not want to be out past sunset. I found a suitable place to eat. The dry-erase board indicated it was serving arroz con menestra, legumes, for $1.20. After taking a seat, I placed my order with the young man. He appeared to be confused saying he did not have and offered me plates of meat. An old man intervened. The guy was confused that I was actually speaking Spanish. 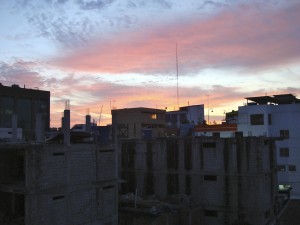 The old man apologized. In English he said, “I am sorry he does not speak your language.” I asked him, “English or Spanish.” He replied, “Both.” We switched back to Spanish. He reassured my Spanish was pretty good and that I had spoken correctly.

Back at the hotel, I looked out the window of my home for the night. The sunset was beautiful, The sky was illuminated in several different colors. It did remind me of a San Francisco sunset. However, looking at the dilapidated buildings surrounding me, I knew I was nowhere near home.