Even though I woke only a few hundred meters from the beach, I was headed away from the ocean and into the desert. Since arriving in Peru, I have been spending most of my time soaking up the sun’s rays on the beautiful beaches and diving into the warm Pacific Ocean of my host country rather than soaking up local culture and diving into the historical facets of Peruvian culture. Today I would be taking a field trip to Chan Chan, a Pre-Colombian city built around 850 AD in the Peruvian coastal desert and an UNESCO World Heritage site.

I caught one of the brightly painted Huanchaco bus as it weaved through the tiny beach town picking up passengers to take to Trujillo. The fare was only S.1.5 (about $0.60). The ayudante also picked up some grapes from a vendor for him and the driver to share. On several bus rides, I have noticed the ayudante sprint off the moving bus and stamp a piece of paper. I think these are the quality control forms. Then this bus would sit for about a minute while the driver and other guy chatted and chomped on some grapes before they repeated the process. 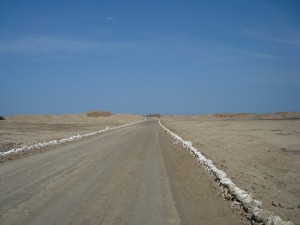 The bus dropped me off alongside the main road at a sandy road would lead me through the coastal desert to the site. There was a harmless-looking white dude walking down the road who I caught up to and passed. There had been warnings about this road being dangerous. The usual. Muggings. I took precautions by only carrying enough cash for a round-trip bus fare, a water or fruit juice and the entrance fee. The only other items of value in my bag were my camera that had been dropped on the ground and sand so many times, I was surprised it still worked; and my blackberry which would not disturb me if it was stolen so I could justify a new and a new and smarter smart phone when I returned to the States. 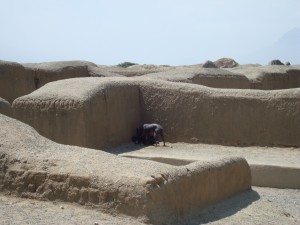 After having to deal with all the “Chicken Little” type warnings post-9-11 in DC and in the airports, I have a hard time taking warnings seriously. Are they bullshit or legit? After Quito, I put a little more weight than I do the Code Yellow (or is it Orange?) at home. I want to be careful but not paralyzed in fear. It was Sunday, this was a site of interest for me and other Peruvians so I figured there would be others around.

Coming towards me was a large group of people. In my mind, I of course assumed they were Indians since I saw jet black hair and brightly colored clothes. My mind was having a hard time adjusting that I was on the coast in South America rather than in the Middle East or arid areas of India. Yes, it was a mirage. No Indians. No saris. Just a bunch of Peruvians walking along to the tunes of Daddy Yankee.

After I entered the site, I was greeted by a hairless dog looking eager to guide me through the site. Hairless cats look terrifying while hairless rats can look adorable but this hairless dog was neither and just plain creeped me out. The dog quickly lost interest in me and began to bark at another dog trying to sleep in the shade. What was the hairless dogs mission? To play? To snuggle? Or just annoy? The other dog beared it’s teeth and did not want to have any of it.

There was an eager male guide who jumped up to offer his services but I declined. While I do enjoy getting tours to get more information, I was not looking forward to having a male guide me through a labyrinth and then think we have a relationship anything other than a professional one. 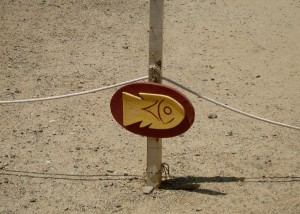 With curiosity as my guide, I began to explore the site with the aid of little fish pointing me in the direction I was supposed to walk. I thought it was odd fish led the way considering I was walking through this barren landscape. The fish were very helpful since Chan Chan felt like a giant maze.

The site was in excellent condition despite being built in 850AD out of adobe. It has weathered it’s fair share of storms, encounters with El Niño and perhaps tsunamis? I was amazed it was not just a bunch of heaps of dirt. The carvings were still visible. Mainly of pelicans, like the many I had to avoid stepping on when I walked the beach yesterday and fish. The short walls looked liked fishing nets. I guess it easy easy to deduce the ocean was their main, perhaps only source of sustenance. 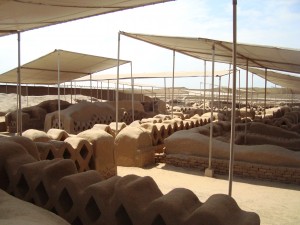 The name Chan Chan means Sun Sun. Other than the few areas protected with tarps, this site was getting cooked by the sun sun. Part of the entrance fee to Chan Chan included a visit to Museo del Sitio only 500 meters down the highway past the dirt road to Chan Chan. Wanting some shade shade, I made the trek to check out the museum. Another opportunity to learn more about the culture and practice my comprehension of Spanish. I looked at my watch, enough cultural infusion. Back to the beach.

Back in town, I needed to eat. Since I found no sewers like I did in as Mancora pumping into the ocean, I figured I’d give ceviche a try. Seeing people eating heaps of what appeared to be fresh and delicious ceviche, how can a person resist? I grabbed an ocean front seat and ordered. I was not disappointed. OMG! Best. Ceviche. Ever! If I had explosive diarrhea tomorrow, TOTALLY WORTH IT!! I had a Cusquena beer with my lunch/dinner even though it was a little premature since I had not made it to Cuzco yet.

Since I had not been drinking, I was a cheep date and a wee buzzed. I swear it did not impair my next transaction. I intended in only buying a dress for my top SF chica who had been keeping my life straight back in San Francisco, but then ended up bargaining for 2 cute lil dresses. Eh, nothing wrong with 2 hot chicks in dresses. At least they were slightly different.

After frolicking at the beach for a bit, I returned to Naylamp. After a much needed a shower, I took my perch to have a bird’s eye view over the beach for sunset. As i watched another epic sunset, I was happy to have WiFi and be able to chat with some of my fabulous peeps. It was nice to have company.

The previous day, after sharing the story of my fabulous bus ride from Mancora, a guy suggested the day bus to Lima. Even though it was 8 hour, the scenery was so beautiful it was worth every minute. SInce it was before 7, I went out in search of groceries for the bus. Sadly, the tiendas were closed. A lady sitting in front of her small storefront that displayed only water and juice said she did indeed have yogurt but I think she sold me what was in her own stash. I was happy to end my cultured infused day with my bacteria cultured infused drink for my bus ride tomorrow.