Carlos & I agreed to wake up in time for breakfast at 8AM. The plan for the day was to eat, climb Cerro Monserrate, shower, check-out, eat, visit Museo de Botero, chill, eat and catch 9PM overnight bus to Armenia.

Breakfast was the similar to the previous day: fresas con yogur de fresa, granola, pan, mantequilla, queso, huevos revueltos, jugo de watermelon y cafe. By 8:30, we were fueled up and ready to conquer the trail to Cerro Monserrate. 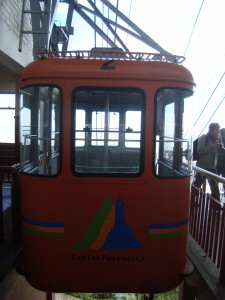 In front of our hotel was Avenida Jimenez. A a section of the avenue is closed off to vehicles except Transmilenio and has a tree-lined pedestrian sidewalk along with an enclosed water stream. We took it east towards the mountains. Carlos was nursing an injury that gets exacerbated by hills and the slight incline was enough to make it uncomfortable. Instead of hiking to the top, we took the teleferico.

At the top, getting off the teleferico we passed to two men stretching. They obviously hiked up the hill and looked at us like we were lazy bastards for taking the easy way. Little did they know, Carlos & I had a bad-ass hike planned for the next day. The attraction at the top of the hill was a white stucco church that overlooks Bogota. I stepped inside to visually confirm, yep, indeed it is a church. What made the church unique, besides excellent real estate, housed inside the side chapel was a black Mary and baby Jesus. 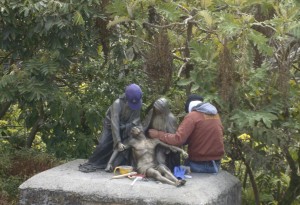 The statues outside the church were more interesting to me. The first was beside the front steps to the church: Jesus standing with a small cross in his hand raised in the air while wearing a cheap plastic raincoat. The gravel walkway below had large statues representing the Stations of the Cross was under construction. The last station, all 3 figures were wrapped in bubble-wrap. Looking at this, the sculpture reminded me of the movie Dude, Where is My Car? in which worshipers of the alien god “Zoltan” are wore bubble-wrap suits. The second to last station, Señor Caido (Fallen Christ) Jesus has passed with Mary the Virgin & Mary Magdelene mourning over the body. I was surprised to see a third person crying on Mary’s shoulder wearing modern clothing, Was this Joseph? Mary Magdelene was wearing a purple ball cap. 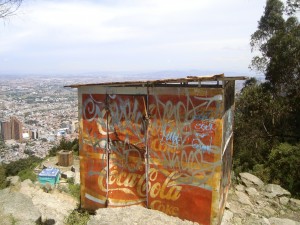 Starting to make our descent along trail, an Italian man asked us to take his photo. In return, he took one of me and Carlos. He introduced himself to us as William but his proper name is Guillermo. He came to Colombia to get complete his certification in Restorative Medicine. Carlos and he talked about political issues, environmental issues and other topics. While the 2 men with the same haircuts discussed important issues, I captured the scenery around me: eagles soaring through the sky, flora lining the trail, the ubiquitous Coca-Cola logo found around the world. Guillermo was interesting and wise for a man of only 27. He and I got into an in-depth conversation about the benefits and intricacies of Ayurvedic medicine.

At the bottom, we parted ways with Guillermo. We would have liked to join him on his visit to the Museo Botero but we had to take care of business before we could play more. First, a trip to the ATM to replenish our cash, we returned to Casa Platypus to shower, pack and check-out. 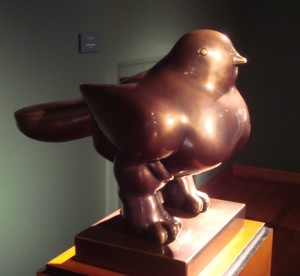 Hungry, Carlos suggested a vegetarian restaurant he had passed the first day in the city, Quinua y Amaranto. The plato de dia was sopa, lentejas, papas, ensalada y un postre con jugo de sandia. I would not say was traditional but it was perfect to make this quasi-veg chica happy.

Finally, we made it to the Museo de Botero that houses works by Fernando Botero (Colombia’s most famous artist, uh hence the name) which holds the contents of his private collection, including select works by Picasso, Renoir, Dali and others. The museo was free including the Casa de Moneda. The Botero collection was larger than life, literally and quite amusing. Casa de Moneda, however, was not as amusing or interesting to me. It probably would have interested me more if the exhibits were interactive as in I could use the machines to produce money and leave with anything I produced. Sharing this thought on the way out of the museum with Carlos, we laughed when we were given commemorative coins. Sweet! 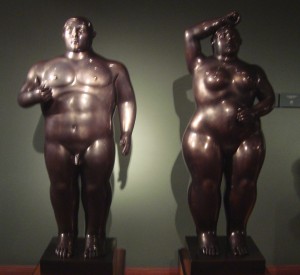 The day was still relatively young, only 3PM. Everything we wanted to do was checked off. I wanted to chill in a cafe. Carlos wanted to try the hot chocolate. We passed by La Puerta Falsa one of the places Maria STRONGLY recommended and got pulled in. We tried the chocolate completo: chocolate, queso, pan con mantequilla y biscotti. It was a different experience to add queso to hot chocolate. I don’t think I got to the same place as Maria, but it was pretty damn good. 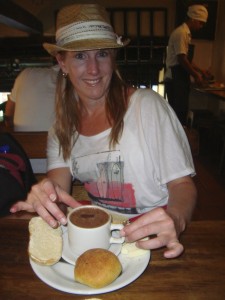 Feeling kind of worn out, we returned to home-base, Casa Platypus, to chill in the lounge. Carlos napped. I edited the 400 photos I had taken thus far. Herman, our friend from breakfast, spotted us returning from his day of museums and sat down with us. Then German, the owner, gave us a round of Aguila beers on the house while also grabbing one for himself. Salud!

A jovial Australian joined in the Happy Hour festivities. He asked Carlos and me what our plans were and suggested we take the 10PM overnight bus to Armenia instead of the 9PM which would give us plenty of time to catch the next morning to catch a colectivo for Salento and Jeeps to Valle de Cocora. When we asked about good places to stay in Salento, he said, “My place.” He was in Bogota because he was hosting a group trip from Salento. Him and his wife own the Plantation House. When he talked to his wife later in the evening, he promised to tell her we were coming and have her arrange our accommodations.

Carlos and I went to get groceries for the next day’s breakfast and lunch for the hike. I love going to grocery stores in other countries because I get to see all the unique items and learn the names. We picked several items including bread, cheese, nuts, bananas, lulos, a fruit of Colombia. 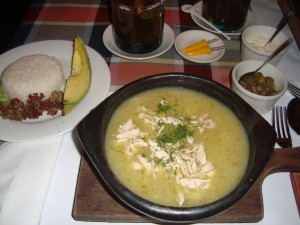 Both of us wanted to try ajiaco, a traditional dish in Bogota. It is a thick soup with 3 kinds of potatoes, chicken, avocado, capers herbs and corn. Herman said they had tried the dish at a few places and he recommended Sanalejo the best. We took his suggestion and got the ajiaco for dinner and got a canelazo, made with aguardiente, mint and cinnamon served hot, to drink. 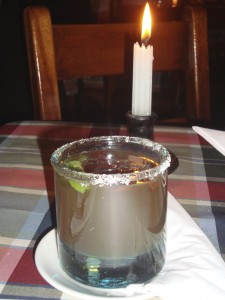 A solo female who was dining next overheard we were from San Francisco. She was too. Maria lives in the lower Haight only a few blocks from me. Mid-conversation, fortunately, I glanced at the time. 9:14PM!! Crap!! We had so much time to kill, now we would actually have to rush to make our bus on time.

Quickly, we paid for dinner. Maria, also staying at Casa Platypus, joined us as we hurried back. Carlos changed while I had the helpful receptionist call for a cab. The driver drove like a madman to help us get to the bus terminal on time. We made it to the bus terminal by 9:52PM. There was no line to get tickets. After quickly paying for our tickets, Carlos & I ran to the other side of the terminal to make it to our gate. People were queued up. Filing in to la fila, we found out the line was for a bus to Cali. Our bus was running, thankfully, a few minutes behind. Whew!

Being so used to taking chicken buses, pimped out with color but bare bones and uncomfortable inside, I was pleasantly shocked by this bus. It had air-condition, large cushioned seats that reclined, toilet onboard and Wifi. Carlos and I were assigned seats together but the bus was half empty so he grabbed on across the aisle. The movie Hangover played, I surfed the Internet with my Mac and swayed back and forth as the bus speed around winding roads. The rocking motion of the bus was an efficient lullaby.