Just before 7AM, the bus arrived in Armenia. Carlos told me both him and driver tried to wake me for several minutes. Carlos escorted my zombie-self through the bus terminal to the colectivo waiting outside ready to whisk us off to Salento. I was looking forward to taking in the scenery on the drive to Salento. However, the only views I was able to see were from the inside of my eyelids as I quickly feel asleep.

The Plantation House was only 2 blocks from were the colectivo unloaded me, Carlos and a few other travelers. We dropped our bags at reception and went to kitchen to eat. They had excellent coffee which comes directly from their coffee farm. Before we finished making our sandwiches for the hike, our room was ready.

Carlos & I walked to the Plaza to catch the Jeeps that would leave from the square at 9:30. There were about a dozen Jeep Wranglers that lined the main square. Only 3 left full, I mean FULL! Our Jeep somehow fit 12 people including driver with 2 guys standing on the back bumper hanging on to the rails for the 45 minute drive. 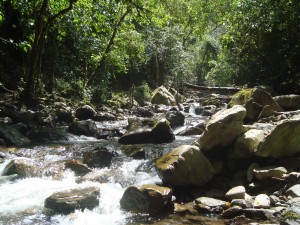 At the destination, everyone piled out and set out for the ~4 hour loop. Carlos and I took the hike at an easy pace because his calf was still bothering him. I was happy not to rush so I could fully enjoy the scenery unfold.

As we walked, the terrain changed. First, the trail went through the valley along the grassland with the towering wax palms overhead. We passed cows and a Playboy with his friends riding horses. Soon we were swallowed by a canopy of trees as we hiked up into the forest along a cascading stream. There were several swinging wooden bridges crisscrossing the water. It took us a little under 2 hours to make it to Acaime. Countless signs were posted along the way warning us of a 3000COP fee, I wondered aloud to Carlos if the fee was used to pay for all the warning signs. In exchange for the fee we could take a break and select a “free item” of either hot chocolate or panela con queso.

Many of the other people on the jeep were still taking a break at Acaime once we got there: the 2 Australian chicks, an English guy and Argentinian. Everyone rested for a bit and exchanged stories. When Carlos and I were ready to motor, Lucas the Argentinian who was on a month holiday from working for his construction company joined us. After Colombia, Lucas planned to live in Lima negotiating construction contracts. 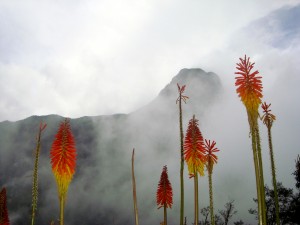 Instead of going back the way we came, we decided to do the entire loop over La Montaña. We had to backtrack from Acaime for about 1K, then conquer the strenuous 2K ascent up La Montana before we had an easy hike down the windy road through the wax palms. Carlos navigated the incline despite his injury much better than me. The altitude, 2860m, was affecting me. I had to pause at regular intervals to catch my breath. because it felt like there was a large Botero Mujer was sitting on top of my chest. Theoretically the view from the top is spectacular. Much like what happens to tourists in San Francisco when they want a good photo of the Golden Gate Bridge, fog rolls in to obstruct the view. Whatever, the views were stunning on the way down among the wax palms.

Carlos, Lucas and I made it back at 3:10, just missing the 3PM jeeps. One hour to wait. Lucas got a mystery juice, Carlos got a Poker beer and I grabbed the bathroom key. My last sandwich tasted heavenly and shared a portion with a cute dog that sadly, you could see his ribs. The 2 Germans and Indian guy from London we met along the trail to Acaime had just finished eating at the nearby restaurant. They had negotiated an earlier jeep if they could recruit more people. The 3 of us eager to get back to Salento hopped in the jeep.

Back to The Plantation, I enjoyed my suicide shower while looking out the window to the lush valley below. Clean and refreshed, I chilled out for a bit in the kitchen/common area. I met 2 Dutch girls and Carlos chatted with an English guy. Carlos got excited when he read a flier in the kitchen for a place called Speakeasy featuring Chicken curry this evening.

Carlos & I set out to search for the place. Along the way, we bumped into Lucas reading a book on a bench. He joined us on the quest for curry. After a lot of asking around to find the Speakeasy. I wondered once we got there, would we need a password in order to gain entry? The Speakeasy ended up being right around the corner from the Plantation House and no passcode needed.

The Speakeasy was a quirky place with American owners which serves as their business and residence that is still a work in process. I met Dave, one of the owners and he told me how the Speakeasy came to being. They had to totally rebuild the building. The furniture was rather sparse. Both in the patio and dining area there were only a few benches and coffee tables. This required us fellow travelers to crowd together creating an instant community. Dave happily accommodated my request for a vegetarian version of the curry which was damn good paired with a Club Colombia beer. Lucas was excited since he has never had an Indian curry.

A young-looking retired couple, Barbara and Arthur, from Santa Fe, New Mexico shared the bench with me along with their travel stories. We agreed about the world being a safer place than the State Department would want us to believe. They have traveled through every continent except for Antarctica and they only have one horror story. In Saigon, they were traveling with another friend and were convinced to take separate bicycle cyclos on a scenic ride to their selected restaurant which involved a trip to a secluded alley where 2 Vietnamese men on a motorbike started asking for money and jabbing the friend with a rolled up magazine which may or may not have held a weapon. In the end, they survived unscathed minus the $500 that was liberated from them.

Tim, the owner of The Plantation House told us about coffee wine. Carlos, Lucas and I made one last stop of the evening at La Elaina. The coffee wine was the size of a shot glass rather than a traditional glass of wine paired with a coffee biscuit tasting  very similar to Bailey’s. The coffee wine was not strong enough to rejuvenate any of us. We paid the bill and called it a night.