PLAN: Get up at 7AM. Leave around 7:30 for the park.
REALITY: WAKE-UP at 7:30. Partying the night before altered the plans. Carlos still felt buzzed and was not moving very quickly. Glad I quit when I did. I felt grrr-EAT. The Floridian in me does not mess around when it comes to hitting the beach. Dressed and gear ready in 10 minutes. Of course throwing on a bikini and board shorts is not all that complicated. 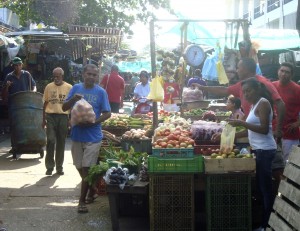 Carlos and I employed the hunter/gather method for obtaining breakfast and lunch. A street vendor had a fresh, hot egg stuffed arepa for 1000COP. The next vendor: a banana 200COP and 2 pinas for 2000COP. I was good! Carlos picked up other items along our route to catch our colectivo.

The colectivos for Parque Nacional Tayrona would be found on the other side of the market. Even when I don’t need anything, I love walking through outdoor food markets and seeing what is available. There was meat hanging in the open air. Yep, definitely do not want any of that! The fruit and vegetables are what really got me excited. Colombia has so many unique fruits I have never tried/seen before: lulo, uchuva, zapote & mamoncillo to name a few. Many of which are made into heavenly jugo naturales. 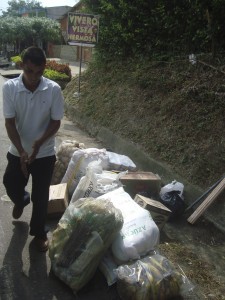 I spotted the Parque Tayrona colectivo slowly driving through the market cruising for passengers. I flagged it down. Carlos & I hopped aboard and sat in the back. I zoned out, watching the scenery as we drove along. At one point, we stopped. The driver got out to hand a think manilla envelope to someone. Then at another, the driver assisted a man unloading his goods from the market: bags of papas, cebollas, azucar, frutas y verduras. Last stop, the remaining passengers piled out. Colectivos wear many hats: taxi/bus service, mail courier and delivery truck.

At a little store across the street from the entrance of the park, Carlos picked up more supplies. I had everything I needed except for a Coca-Cola. It is strange to me that such a redneck state, Georgia, produced a ubiquitous global brand. I don’t drink soft drinks/pop/soda/gaseosas. However, on a few occasions a Coca-Cola was a perfect emergency beverage. One time involved a bus strike in India that required walking 7K in the oppressive heat loaded down with a heavy pack. Dying of heat & thirst, needing electrolytes or sugar, a Coke ended up being the magic elixir for me, my travel buddy & several Indians in the same predicament. Next, on my post-Super Bowl Volcano hike in Nicaragua, I had plenty of water but found myself wishing I had a Coke. Today, I bought a Coca-Cola to have in case of emergency. However, the pleasant breezy day did not end up requiring such drastic measures.

The entrance fee was 30,000 COP, roughly $15. In exchange you gained entry to a gorgeous park along with a bright florescent pink wrist band. Was there a dance club on the beach? Several other gringos were paying or waiting to pay. Once we were all sporting our fancy wristbands, we boarded a colectivo to take us to the trailhead. Once inside, we made our introductions. Besides me and Carlos, there was a solo female from Belgium about 10 years older then me, and a group of four. Of the group, 3 were from Argentina: Paula, Andres & Koti and 1 American, CJ, Paula’s boyfriend who lives in Hawaii but was also from Central Florida.

Once we got to the trailhead, Paula and Koti applied bug spray and offered to spritz me up. Hmmm. Weighing the options: poison vs malaria, dengue, yellow-fever or hideous bug bites, I accepted the poison. I was mad I forgot to bring my organic concoction: vodka, eucalyptus oil and apple cider vinegar for the day. The 7 of us set off on the trail together. Originally, Carlos had planned to hike only to Arrecifes. The crew was headed to San Juan de Cabo for the night. Carlos and I joined them all the way to their destination.

The weather was pleasant but overcast. The trail had several segments. First, we made our way through the jungle with boardwalks of the swampy areas with lush trees including the rooty ceiba tree. Then, a sandy coastal trail that alternated between shrubs, boulders, palm trees. A portion required walking along the beach. It was a good move to wear my Vibrams. Up ahead there were other backpackers making the pilgrimage. We paused at various intervals to grab water, take pictures and and switch hiking buddies.

I enjoyed talking to the Belgian Lady, a solo female traveler with only a few weeks left of a 6 month trip. She gave me tips on visiting the Galapagos Islands and her thoughts about Easter Island. Since we shared a similar philosophy on travel, I decided to skip Easter Island this trip and save it for later. I have to leave some unfinished business.

CJ and I had a lot in common. We talked about Central Florida. He grew up near Doctor Philips, only about 45 minutes from where I grew up, and also attended UCF briefly, my Alma Mater. He and Paula live in the North Shore of Hawaii. We spotted a caiman on the beach. Being the macho man, he got up and personal to it.

Once at Cabo San Juan, everyone scattered to explore, secure accommodation: hammocks or tents, or rest on the sandy beach. I explored by climbing over boulders along the water’s edge. I asked a guy out on the rocks to take a photo of me. He took a few with my camera and several with his as well. The guy’s name was Jaime, also from Florida living in Miami but of Colombian descent. This was his first trip to Colombia. He seemed extremely happy to be talking to me based on his board shorts inability to hide some of his excitement.

I joined the rest of the crew sitting on the beach eating their lunch. I thoroughly enjoyed my fresh and juicy pineapple slices. Carlos joined us shortly. He told me ran into Pericules, the sexy Greek from Bogota. Damn, I missed seeing him with his shirt off! Carlos felt we should be heading back in order to get back to Santa Marta before sundown. I didn’t want to leave. It was so beautiful. 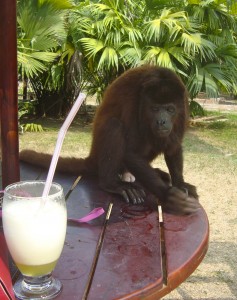 On the way back, at Arrecifes we took a rest stop at Finca Don Pablo were CJ pointed out the first boner of the day, a donkey trying to show off his machismo around the horses. I got a lulo juice, one of my new favorites. Drinking this beverage earned me a new friend, a monkey that surprised me by quietly walking up and hoping on top of the table. The monkey stared at my jugo de lulo longingly. Glad I was not having a meal because the way the monkey sat, his testicles were at eye-level and rubbing all over the tabletop. Too bad after Southeast Asia, India and Sri Lanka I have a strong distrust on monkeys. This one actually was friendly. Later, he cuddled up with another tourist.

We made it back to the trailhead around 3PM. A couple from Chile was eager to get back to Santa Marta and had been waiting for the colectivo to collect enough people to warrant a trip. A taxi driver was willing to go to Santa Marta with 4 people for 20000COP a head. I resisted, too expensive. The Chilean couple was excited to hear I was heading to Chile. Marcelo borrowed a pen and paper from the nearby vendor to write down all the places I should not miss. Sweet! Around 3:30, the couple had been waiting 1 hour. Carlos and I, 30 minutes. It did not appear we were getting close to departure with the colectivo anytime soon. I caved. Carlos did too. It was worth the $6 to go back to Santa Marta without stops before dark.

Everyone piled into the taxi. At the park’s entrance, the taxi driver stopped for Marcelo and Marcarena to take a photo with the map of the park in the background. A security road block caused another brief stop. Last and final stop was Las Brisas Loca. Our Chilean couple was also staying there.

After showering, I went up to the bar to catch up on my journal and upload photos. The only outlet was next to Ryan, still shirtless. Talking to another guy, he pulled out a futbol jersey. This got my attention, I did not think he owned any shirts. I blurted out, “What? You are putting on a shirt?” Ryan asked me, “Do you want me to?” Me, “No. Please don’t.” Really, he did not have the best chest but figured every man likes his ego stoked from time to time thus earning me a drink on the house.

A Canadian named Nicole, in her final days in South America, burst into the room excited to finally get a new passport. The other passport only had 25 days left before expiration but she needed at least 90 left in order to enter Panama to meet her family. I asked, “Where in Canada?” “Alberta.” “Edmonton?” “Yes!” “Did you know you have really hot firemen in your town?” She was intrigued. I showed her pictures of los bombaderos calientes who I met in Nicaragua.

More people joined us. Carlos also came upstairs. He was hungry, I was in the zone and did not want to interrupt my productivity. I mentioned the burrito place downstairs. He checked it out and returned with a menu for me. The restaurant said they would deliver our orders upstairs. He got a burrito and I got a veg quesadilla. After eating, Carlos retired back to our room to chill.

Around 8, more people came into the bar for Happy Hour. Nicole introduced me to an American from Boston: Adam Smith. “Are you an Economist?” He laughed, “Originally, but now in medicine.” “What specialty?” Adam smith, “Pulmonologist.” It was my turn to laugh, “Hello, I am a pformer linezolid pusher!” Over drinks, we got into a deep discussion about linezolid, vancomycin, tigecycline and voriconazole. Jeez, I was not getting paid for this nor able to expense my drinks. I changed the subject. 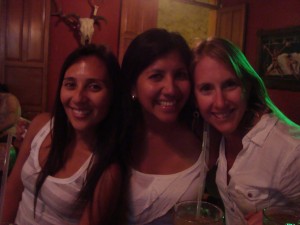 Two Peruvian girls then sat next to me, Katherine and Elisabeth. They were a lot of fun and boy crazy. Katherine had just come from downstairs after chatting online with a Dutch guy she met in Cartagena. She was trying to convince him to add Peru, more specifically, Lima to his itinerary. Katherine and Elisabeth were best friends from University on a week holiday. They bought me a drink. We exchanged contact info and took silly pictures. They made me promise to contact them once I made it to Lima. Por supuesto!

Marcus called out to me as I was coming back from a trip to the loo. He was hanging out in the lounge area next to the bar and wanted me to join him. Since he was headed back to the States, I helped him plan his cross country itinerary from NYC back to SF. We then compared notes on where we hang out in the city. Marcus was surprised to never have run into me considering we have a few overlapping favorite hangouts. Although he was very attractive, even if I had run into him in SF, I probably would not have gone out of my way to introduce myself. He is not my type. We yawned simultaneously. Time to call it a night. Before we turned in, he made sure to friend me on Facebook.