The tour of Finca Don Edwardo started at 8:30. I did not get up until 8AM which meant I did not have enough time for me to grab a pre-coffee tour coffee at The Plantation House since everyone was ready on time. No worries, a tour of a coffee plantation means we will get to sample at some point. 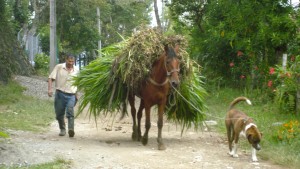 The finca was a 15 minute walk along a dirt road. A few men with loaded down horses passed us along the way. Prior to the main roads used now, this was the original thoroughfare for travel and trade from Salento to Bogota. Andres our guide conducted the tour entirely in spanish with Carlos stepping in periodically to translate for the group of gringos. A white husky, a collie and another small feisty mutt assumed roles as assistant guides vigorously barking at various intervals along the trail. What thoughts were they trying to convey? Unfortunately, none of us could translate what Lassie et al were trying to express. 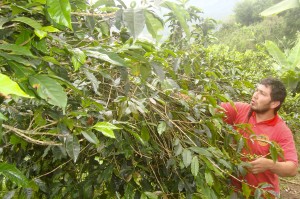 Our group weaved through the path among: coffee bushes, banana trees, plantain trees, bamboo, pineapples, yerba buena among others. The farm was run by employing mostly organic methods and biodiversity to keep the land healthy and free of pests naturally. Since I do love an excellent productivity-boosting cup of coffee, I was happy to learn and to see first-hand the process from the seed that starts it all, to drinking the finished product. Wow! Best. Coffee. Ever! The coffee here has been so good, I have skipped ordering it con leche and only use a small dash of azucar.

Since we were roaming through the fields of coffee, The Plantation House extended us a late check-out to accommodate us. I showered first then packed. While Carlos showered and packed, I took care of check-out and figured out the details in regard to  catching the colectivo. When I told Carlos the amount he owed me, he seemed confused. Rightfully so. Apparently I had enjoyed the time in Salento so much, it felt like we were here much longer than one night and paid for 2. Feeling like a silly girl, I had to go back to Freddy and tell him my mistake. Loca chica!

It was 12:40PM. The colectivo for Pereira at 1PM. Considering our few other close calls, I didn’t want to risk rushing through a proper lunch. A lady was cooking arepas at the intersection where we needed to wait for the colectivo. Perfect! I bought an arepa, a thick corn flour based thick pancake either grilled or fried, con queso. Carlos followed my lead and got one also.

As we stepped under the awning to eat our first arepa, the sky opened up. Carlos said how lucky we were that it was raining for our bus trip and not during our hike the previous day. He was obviously thinking of the friends we made this morning that were probably getting soaked in Valle de Cocora right now. I reminded Carlos of the 3rd rule of traveling with me: everything always works out much like Jerry Seinfeld in the Even Steven episode, I am Even Keren and told him to consider himself lucky that I let him travel with me.

Two local men joined us under the awning to escape the rain while waiting for the colectivo, one struck up a conversation with Carlos in Spanish. I zoned out watching the rain and listening to the men discuss the intricacies of language. The man shared the pneumonic devices he uses to help him remember certain words in English. Then he asked to borrow my pen and notepad I always keep handy for these types of interactions and gave me and Carlos an impromptu Spanish grammar lesson.

The colectivo was on time, picking us up at 1:05 and took a little over an hour to arrive in Pereira where we were to connect to the bus for Medellin. It took a mental adjustment for me to get used to having to buy bus tickets in advance from the counters at the bus station rather than just finding a bus and hopping on like I was used to doing in India and Central America. The agent said there was an option to purchase a meal. Since I still had water and snacks from the other day I declined. Carlos opted in and paid for a meal.

Barely stepping away from the counter, Carlos heard his name overhead. The bus was leaving in 10 minutes but I guess they wanted us to board now. Onboard the bus, it was pretty empty and we took seats across from one another. I settled in and read my book.

A few hours in, Carlos inquired about his meal. No meal. This did not make him the least bit happy and he communicated this to the Ayudante. About a half hour later, he gave Carlos the meal he had ordered for himself. Even though I was not hungry, Carlos insisted on sharing some with me. I then cut and offered him some of my lulo. This was the first time trying this fruit which tasted sweet and left a prickly sensation on my tongue.

At one point I looked out the window and saw a bad accident that had slowed down traffic. Thankfully, I had been engrossed in the book my friend gave me not to notice how hard the rain was coming down, how high the winding road was perched above the steep valleys. The only thing to prevent us falling to our doom was the skilled efforts of our driver and not the flimsy barbed wire fences.

Despite the rainy conditions, we arrived in 5 1/2 hours at 8PM. The bus station was huge. The ramp we took to the top floor made me feel as though we were arriving at Penn Station in NYC. Downstairs we found a line of taxis. No need to haggle since they used meters.

Medellin instantly had a different look and feel than Bogota. The driver slowed pushed his way through the jammed streets of Zona Rosa to El Poblado. Medellin was bright lights and big city but not in a tacky way but more like an elegant South Beach. Not only was it modern, Medellin the only city in Colombia with a Metro. Considering the not so pleasant past with, Pablo Escobar along with other drug lords ruling the city, the positive thing to come out of the cocaine economy was some of it was used for public works and to build the city.

The driver took us to Tamarindo Hostel but we needed to go it’s sister property: Tamarindo Inn. One more loop. At first appearance, along the street appeared to be only 2 droguerias and a Chinese restaurant. WTF? A Chinese man gestured to us and rang the bell for the hotel that loomed above. Presumably, he sees bewildered guests in front all the time. There was no one else staying at Tamarindo Inn. Carlos and I had our pick of rooms. We selected one towards the back in order to not hear the traffic on the street far from the annoying door buzzer.

There was a grocery store on the block called Exito Express that looked like a 7-11 but was a scaled down version of the mammoth grocery store a half a mile away. I picked up 2 Reddy beers for me and Carlos. While sipping on the beers that tasted like cider, we took advantage of the technology around us: TV and WiFi before passing out after a long few days.