1:00AM. The bus stopped for a coffee break for the drivers. I got off to pee and stretch my legs. Once back on the bus, I tried to go back to sleep but a lady started yelling at the driver about something. Then some men started getting feisty. At one point, the bus stopped and pulled over. I had a front row seat for the fight. At one point, a man got up in the drivers face as if he were about to punch him. Then, as quickly as everything started, the tension evaporated. I was to groggy to translate, but I think the driver’s thought a lady had snuck on the bus at the last stop who had lost her ticket. There was no more drama for the remainder of the ride.

The next time I woke up was in Cali to the sound of everyone getting off the bus. No one was heading to Popayan on this bus because it was going out of service. Like I thought in Medellin, there was plenty of transport heading to Popayan. I found a colectivo immediately. I ate the papaya and granola acquired yesterday for breakfast. The winding roads quickly but me back to sleep for another 3 hours.

Night buses are like time machines. You wake up in the future in a new place. I woke up in Popayan. My calf hurt from sleeping in a contorted position in the bus seat last night. A former boyfriend joked with me once, “It is good to know in a pinch I could fold you up into an overhead compartment in a plane.” Much like my time with him, I could barely walk after last night. Adding a backpack plus my day bag did not help matters. Walking across the street in South America is much different than in Vietnam, pedestrians do not have the right of way. There were 2 options leaving the bus station. Option 1: safely go

up the ramp and flight of stairs to the pedestrian bridge that safely takes you over the busy road and down again. Option 2: Dodge across the street without aid of crosswalk and take your chances. My calf was telling me to piss off and would not take any part of Option 1. So, option 2. Time to play Frogger. This reminded me of crossing the street in Vietnam. Please do not run over the young blonde who happens to walk like an 80 year old!

Whew! I made it! Crap, 2 kilometers left to go. At least there were decent sidewalks. However, at each curb, step down OUCH! and step up 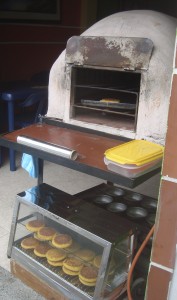 FRICK! and repeat all the way to the Hostel: Hosteltrail. The lady buzzed me in. I grimaced looking at the flight of stairs up to the reception. She offered me a private room for 28000COP or 17000COP dorm with only 2 other beds. I chose the dorm. She
told me to follow her down the stairs and up another flight. OMG! Kill me! If she would have told me I would have to deal with stairs, I would have paid more for the private room.

I showered and ventured out for lunch. I barely made it 2 blocks the sky opened up. It started pouring. No umbrella. No plans to roam. I ran back to the hostel but not before grabbing the best arepa I’ve tasted to date along with a tinto.

Back inside. This would be a good to nap. However, the tinto woke me up. I looked at my yoga mat, grabbed it to take to the empty common room and practiced yoga: 5 Surynamaskara A’s and 5 B’s as I focused on my calf throughout each posture as well as breathing exercises. The one thing that has surprised me thus far is the affect the altitude has had on me. I hoped the breathing exercises would help my lung capacity. OM! I felt better. Now, I can breath and walk! 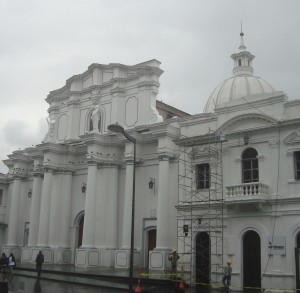 The rain had stopped. Time to hit the town. Popayan was charming older city with cobblestone streets with white-washed buildings. Some of the sidewalks were tile causing me to slip on the slick surfaces. Enormous trees towered over the Central Square framed with buildings housing a Juan Valdez and several fotocopy shops along with the requisite Cathedral.

Walking away from the square, I passed several clothing and shoe stores. I saw a very disturbing cart full of crocs which should banned along with styrofoam! Plenty of store but few food options for me. Pollo places were on every corner. Almuerzo options: meat, meat, meat meat. Then I saw a sign Delicias Naturales…thank you Krishna! This was a 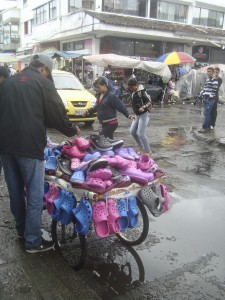 restaurant run by Hare Krishnas serving up sweet vegetarian plates for only 3000 COP! I started chanting in my head what I learned at the Sivananda Ashram, “Hare Krishna-ah, Hare Krishna. Krishna Krishna Hare Hare…” I was in my happy place.

Back at the Hostel, I met Emma, one of my roommates, who is a British lawyer on holiday. Currently, she is transitioning moving back to London after a year working in Amsterdam. We got along well and decided to head out for a wee hike together to El Murro. 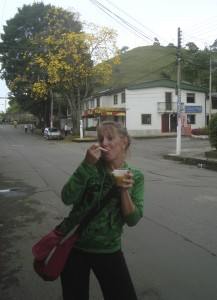 On our way there, I saw a place listing champu on the sign. Chicha and champu were on my “to try” checklist. Time to uncheck champu. I ordered one and Emma did well. Champu is a drink of corn, pineapple and lulo. The corn included gave it an odd texture but was fruity and refreshing.

The hike to the viewpoint was said to take 45 minutes. The hike took me & Emma maybe 20 minutes of strolling leisurely through the city to get to the park and trailhead including the stop for champu. We had the choice between taking a muddy path or civilized stepping stones weaving up to the top taking less than 5 minutes to reach the top. Despite the yoga breathing exercises, the steps were not super steep but my lungs still thought they were. When am I going to acclimate to the altitude already?

I love hanging out with British people. We got to the top. Snapped 2 photos. Neither of us  were flabbergasted. Simultaneously we looked at each other. Ok then, shall we go? On the way back down we were greeted by friendly policeman on horses.

Earlier in the day, a few people went out of town to a place called Syliva about 30-45 minutes away. On Tuesdays, they have a huge market. A young couple currently living in Chile were preparing a feast in the kitchen with the fresh fruit and vegetables they had picked up from their trip. This spread made my 3 plump mangos I picked up in town today seem sad and ordinary. I cut them up. 2 for tomorrow. One for tonight along with some plain yogurt.

After 2 grueling travel days, I just wanted to chill in the yoga/ TV lounge. I joined Emma and cracked open a cold bottle of Club Colombia which was not as good as Apostol or Tres Corderillas but still better than any popular Central American lager. She selected from the available DVDs: The Invention of Lying which was pretty damn hilarious and a good diversion for the night.

Going to bed, I thought about my day. I had a great day. I enjoyed hanging out in Popayan but did not participate in any activities I could share with other travelers to inspire them to come to Popayan. However, I was happy. I enjoyed having an ordinary day at a relaxed pace. It was all good: good yoga practice, good (perhaps great) veg meal, good conversation, good stroll through town, good mango, good movie….Goodnight!