Either drinking 4L of water in one night does the trick or I am finally acclimated to the altitude. My free breakfast was just an egg with 2 slices of bread. I made up for the meager portions by having 10 cups of coffee!

Otavalo is known for it’s huge Saturday markets with vendors every day selling the same things: ponchos, hats, tapestries, woven masks (reminding me of Nacho Libre) but on a much smaller scale. Being Friday, I wandered through to check it out, not really expecting to buy anything. A bright multi-colored scarf caught my eye. Since in my mind, I was planning on being in a bikini the entire trip, I have been using my sarong as a scarf in the colder highlands. I negotiated with the lady and got it for $1! 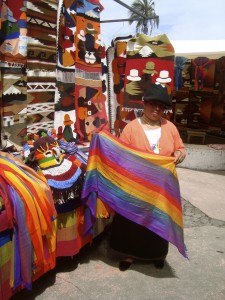 The women in there traditional clothing wear multi-strand gold beaded necklaces. I liked them. One guy wanted $9 and would not bargain. A little girl was manning her parent’s stall wanted $7 and I got her down to $5.50. I asked to take her picture after the transaction. After I snapped a photo, her dad said it would be an extra $ for the photo. I said, “Pregunta antes, no despues”. He smiled and laughed. 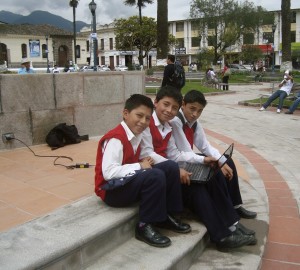 I was told the Quito bus was leaving in 5 minutes and this time it actually did! Stepping onto the bus, I saw a big photo of Jesus behind the bus driver’s seat. I guess Jesus is his co-pilot for the 2.5 hours from Otavalo to Quito. 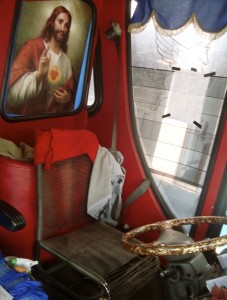 Before boarding the bus, I made the big mistake of finishing the last liter of water. These buses were almost as nice as the Colombian variety except for one big difference: NO BAÑO! Even though I try to avoid them anyway since I am worried that I will fall into the toilet while the bus is in motion, sometimes, they are good to have in case of emergency. Looking at my watch, 2 hours. I am not going to make it. I unzipped my pants to reduce pressure. This is the one time I am jealous of men who can pee in a cup and throw it out the window. If only I had a funnel and a big gulp cup…

It is a miracle. Thank you co-pilot Jesus! The bus pulled into a station and it was the Quito station! With a quarter ready and toilet paper handy. I grabbed my pack, ran to the bathroom. I gave the attendant my coin without waiting for $.20 back. Ahhhhhh! At least I knew I was no longer dehydrated!

I took a taxi to El Centro del Mundo. When I make decisions, they are based on serious calculations. Other times, decisions are based on not-so-serious reasons. I choose this Hostel mainly because of the name and that I was going to go to the equator! The bonus was I scored a $5 dorms per night, less than the taxi-ride from the bus station!

At first, I was totally grossed out by the dark and musky-smelling room and bed. The available lockers did not give me a secure feeling as one looked like it had been repaired after having an encounter with an ax. Keren, don’t be a princess and expect more for $5. On the same floor, I peered into another room. No other occupants! There was a window allowing air to circulate and sunshine (at that moment) to pour in. I made the executive decision to assign myself a new room and bottom bunk. My locker next to my bed was also in good condition. The bed was in good condition and had bright new blankets. Much better! The only drawback now, no WiFi. How spoiled I have become!

The sun was soon a thing of the past. It started to rain. I found a place around the corner for lunch the only veg option was tortilla soup. They didn’t have WiFi either. More rain. I sought out shelter at Juan Valdez. Hmmm cappuccino or Irish coffee? I celebrated my Irish Heritage with a speedy WiFi connection. I responded to e-mails that have been piling up in my inbox.

Did I mention it was raining? No explorations for me plus it was already 6:30. I could chill at the Hostel for the night. Back to my dorm, I found I was no longer the solo inhabitant. I was now sharing it with a man from Argentina dude. We talked for about an hour alternating between Spanish and English helping each other with grammar.

I went downstairs to eat my yogurt and uchuvas since there was no refrigerator for the guests to use. There were a bunch of guys celebrating free rum night. When the free allotment ran out. A guy went around collecting donations for another bottle of rum and bottle coke for $6 total. I didn’t put in the first round, not sure if I wanted to drink, plus, my first round should be free and I was the only female out of 10 dudes. The bottles were added to the pot, stirred with a ladle and poured into plastic cups. Kind of ghetto set-up but tasted good anyway. Really, it was fitting considering the place.

At first, I was just catching up on my journal and just listening to stories. One dude has been riding his motorcycle from Vancouver through North, Central and now South America. He got into an accident in Guatemala but only required a wee bit of repairs for both himself and bike. He shared how the locals had really helped him out. I tuned in and out. When I heard, someone saying something about vodka enemas, I had to know what the hell was going on. I closed my laptop and joined the party. When it was time for the next collection for “the pot” I chipped in.

Still being the only female, I was getting plenty of attention despite looking like complete shit: wearing the same outfit as I had on in Medellin when I caught the attention of Manesh. I was sans make-up wearing glasses and hair in a ponytail. Let’s just say, I definitely was not putting forth anything close to an A-game but in a hostel, guys are not that picky. All that really mattered was that I had boobs and a vagina. All I was really trolling for was travel information.

Soon, everyone wanted to go out. Richard was the ringleader and best-looking of the bunch. I told them I needed to change really quick. Him and the others said they would wait. As I have shared in previous posts, I can get ready in a flash. Not as quick as Superman or Wonder Woman but close to it. In less than 3 minutes I was coming downstairs, my hair was down, glasses off (no contacts but seeing is overrated), lip gloss on, wearing a skirt, red strappy heels and halter top that needed a tie.

Downstairs. Only one dude was waiting. What the hell? He tied me up, my halter that is. We stepped outside the gate of the hostel. Me, “So, where did everyone go? Do you know how to get there?” Him, “I don’t know?” The neighborhood we were staying in, Mariscal area, according to several sources, is not a safe place to wander around at night. The group of guys left me with captain clueless to guide me along these streets?

I said both in my head and aloud. Buzzed the door, went back inside and upstairs into my room. A few minutes later Captain Clueless was knocking on my door. Sorry dude, not interested.