My alarm was set for 7:15AM. As I was opening the door to go to the bathroom the guy from reception was on the other side telling me that the taxi was ready. Crap, he thought I said siete cuarto not siete y cuarento.

At the airport, there was an entirely separate system for international, domestic and Galapagos flights. For the Galapagos bound flights, passengers needed to have our bags scanned and obtain our tourist card for $10 prior to checking in.

Since I left early, I got jipped out of my whopping 2 slices of toast. I picked up a proper breakfast at the airport cafe that claimed to have WiFi. I was handed the clave along with my breakfast. After several failed attempts to connect to the network, I checked to make sure I had the right code. The person at the counter replied, “No WiFI today.” I wondered why he had bothered to write down and give me the clave if that were the case.

My nose was running like a faucet and I was only feeling only slightly better. I felt escaping this polluted city in exchange for the fresh air in the islands would help. The problem with having a cold is equalizing to the cabin pressure was going to be a bitch. My pre-boarding activities involved picking up a pack of gum and grabbing a huge wad of toilet paper for the flight. 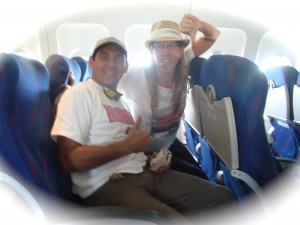 Boarding the plane, I was happy to find I had the window seat. Regardless  how many flights I have been on in my lifetime, but never tire of looking out the window. Do dogs ever tire of sticking there heads out the car window? An Ecuadorian man wearing a Florida Gator’s T-shirt sat in my row. I gave him proper shit for being a fan of an inferior team. He explained his brother had attended the school. Small world!

I was so excited I was having a hard time containing myself. There are sites throughout the world devotees make their pilgrimage to visit for religious or personal reasons at least once in their lifetime. The Galapagos was a pilgrimage for me. Growing up I attended Catholic school which involved a a curriculum requiring you believe everything you were taught, to have unquestionable faith. However, I have always been drawn to science, logic and reason. This did not bode well for me in that environment. I was considered a problem student by my teachers because I dared to question them with the pesky word “why”. Oddly, one of my teachers at St Peter’s Catholic School, Father John (a non-Catholic priest), was the first person to expose me to Charles Darwin, evolution and the Galapagos. To this day, he is still one of my favorite teachers. Why does there have to be a creation vs evolution conflict? If Eve could have the free will to select and eat an apple, what is the problem with different species selecting favorable mates and evolving over time? Can’t free will also translate into natural selection and survival of the fittest? The creation story was beat into my head but I also believe in evolution. I believe there is a Big Dude that looks out for my crazy ass. A Big Dude who has several aliases and nicknames throughout the world. I believe the Big Dude gets rather annoyed with all people who bicker about who is “right”. 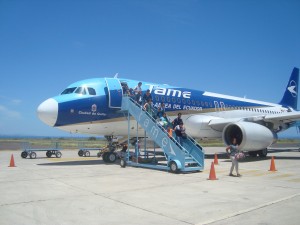 Just before the plane landed, the flight attendants opened all the overhead bins and sprayed some sort of decontaminant which smelled more pleasant than the wretched spray Geraldo used in my dorm at El Centro del Mundo. The plane landed on Isla Baltra. I walked off the plane and into the queue to pay the $100 national park fee. While waiting, I was trying to get my ears to pop. No luck. I could not hear anything but muffled sounds. Scuba diving was not looking good.

I was staying on Isla Santa Cruz the adjacent island to Isla Baltra separated by a only small split. Theoretically, I could easily swim across if I didn’t have a huge backpack and my computer. The free airport bus shuttled us to the ferry dock. The crossing took less then 5 minutes to make the trip across the channel from dock to dock. Taxis, colectivos and the public bus waited for the ferry. I stepped onto the public bus to to Puerto Ayora and sat in an empty seat next to an Ecuadorian woman named Ruina Arabic name meaning light. Interesting, the spelling of my name is of Hebrew origin means ray of light aka beauty. Two mutually deLIGHTful ladies conversed the entire 45 minute ride in Spanish. I told her about myself, why I was traveling and my former job. I showed her the pictures of my family: mi madre, mi padre, mi hermano Eric, mi cunada Stacy, mi sobrina Jordan (hija de mi pseudo-canada Kym), mi sobrino nuevo Landon (hijo de Stacy) while sharing photos of them. “OOh, una familia hermosa!” She pulled out pictures from her wallet and told me about her family: 3 hijos: 2 sons and a daughter who are going to school in Quito but live with her in Otavalo between semesters. When I told her I visited Otavalo and loved it, she beamed. She did not show a photo of her husband. I asked why (hell, people ask me stuff like this all the time). No photo. “Separado”. “Yo, tambien,” showing her the photo of Kym, Eric holding Jordan as a baby along with me and my former boyfriend of 11 years aka “ex-husband” from a previous Christmas. She has a novio guapo en Galapagos, Santa Cruz, the reason she comes to the island so frequently from the mainland, el continente. She is a businesswoman, empresaria de una fabrica painter and writer. She gave be a little book of her poems and her phone number, just in case. 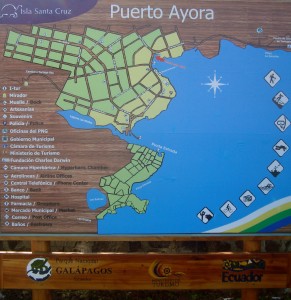 Two choices, Amigos or Hotel Salinas. I chose Amigos. I walked in and was greeted by a guy and 2 Huskies. He gave me the room but said la mujer no esta aqui. She would check me in later.

Feeling hot, sweaty and gross, I showered before lunch. Being already 1:45, many places were not offering almuerzo, mostly catering to tourists along the main strip, Av Charles Darwin. Going in a few blocks, I found a place but “No mas sopa.” I got a plato con ensalada, arroz, lentejas y pescado: tuna con jugo y agua for $3.50.

After lunch, I went back to Amigo’s where the man’s best friend greeted me but I found no amigos to check me in. Oh well, time to wander. Along the way, I dropped off laundry at Laundry Lava and checked out Hotel Salinas. For only $1 more, I had a private room with bathroom, a clave for the Internet and someone always there holding down the fort. “Yo lo toma!” I ran back, repacked the few items I took out and relocated.

Even though I was happy to be in the Galapagos, as I wandered, I was grumpy. Not wanting to taint my first impression, I bought a huge drum of water and returned to Hotel Salinas for a much-needed nap. It was like negotiating with a five year-old (my inner one). “But I don’t wanna nap.” Adult me, “Well, you are still sick. It will make you feel better. You will be able to have more fun later as a result.” “FINE!” Zzzzzzzzz.

Two hours later, feeling better. I went to pick up my laundry, but they had closed for the day. I returned to the same street I had lunch. The street was transformed to a large dining area lined with food stalls. I choose one that appeared to be family run by a bunch of fat jovial spirit who looked like the knew how to make some good food. Indeed! I enjoyed a Encocado Pescado. Umm-UM!

Another night sans alcohol. I drink from my multi-gallon jug of water that was only $1.50 and I could refill it for only $.30. Food + Hydration + sleep = my recipe to feel better. Tomorrow, I will make my pilgrimage to the beach!