Role reversal from the previous day. Carlos up first and on a mission. I was moving slow in no rush checking my e-mail and Facebook. While on Facebook, I accepted Marcus’ friendship and Himanshu, my young Indian penpal/admirer I met in Agra pinged me. Him and I chatted for a bit. Himanshu updated me on recent events. Then, he inquired about my husband and if there are now kids. Crap, time to come clean. I admitted I was no longer married. And, no, no kids. He typed his condolences then asked when I was coming back to see him. Maybe the end of December or middle of January as I have a wedding to attend in Sri Lanka. He got excited. I was telling the truth but not sharing he had no chance of anything more than a friendship. Even though when we met I had a boyfriend, aka husband, 5 years younger, I would not accept a marriage proposal from him. Himanshu is only 22. I am in my 30’s. Even though my friends jokingly call me a Puma, cougar-in-training, my tastes are now more refined. 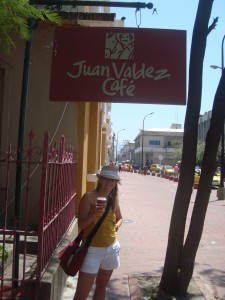 Speaking of taste. Time for breakfast. Not feeling ravenous and knowing I only needed enough calories to cover enough energy required for sitting on a 5 hour bus. I was happy to have a fresh and juicy pina and a cuppa Joe from dear old Juan Valdez. Carlos, being a man, required more energy. We stumbled on a pasta place along a side road and ordered an almuerzo de res. I supplemented my pina with a jugo de papaya.

To maximize time, I left Carlos to finish his almuerzo de res to take care of a few errands. As I walked the calles to grab some bananas and cash, I heard the familiar kissy faces and catcalls from Colombian men. Wow, I guess Carlos had been providing a buffer from unwanted attention. 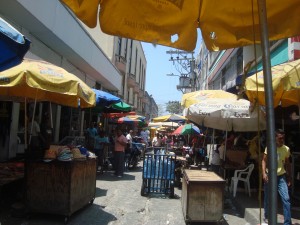 In order to make life easy, we opted for a direct shuttle for the trip to Cartagena. While waiting for the shuttle, I saw my Peruvian chicas. They were sad I did not say goodbye last night. Katherine was understanding since she saw me sitting with Marcos and gave me the thumbs up. The 12:30 pick-up happened at 12:40. Both of us said goodbye to Carlos’ cousin, Ricky, who had been extremely helpful. When I got on the shuttle, I resisted asking, “Is this the bus the Cartagena?” using a bad American accent like in Romancing the Stone.

Finally, finished the book Clara gave me in Hawaii: The Friends we Keep. Keeping with tradition, she got it from a friend and give it to me. In turn, I gladly passed it on to Carlos in exchange for the Colombia book. Although, based on the track-record he had with reading was not good given Carlos had yet to crack open the other book he brought with him.

No longer engrossed in my book I looked out the windows to see we were sandwiched between two bodies of water: the Caribbean & Cienaga del Totumo, on a small sliver of land. Cienaga in Spanish  means swamp or bog. This appeared to be an extremely poor area. There were remains of buildings on the Caribbean side and on the other buildings densely packed together, many on stilts. There were more vendors then usual lining the center of the street at the toll plaza desperately trying to sell various snacks and beverages to passing vehicles. My window did not open or I would have bought a bottle of water or snack as we sat in traffic.

On buses, with exception of the chicken variety, I am accustomed to seeing American Movies dubbed into Spanish. To my surprise, the feature movie was an Indian movie with Spanish subtitles. The trip was supposed to take 5 hours but only took 4.

The colectivo dropped me, Carlos and several people off at calle Media Luna in Getsemani, a neighborhood in Cartagena. We went into Casa Villa Colonial to check in. Keeping with the trend of partner hotels in Colombia, we actually had a reservation at the sister Hotel Villa Colonial around the corner. 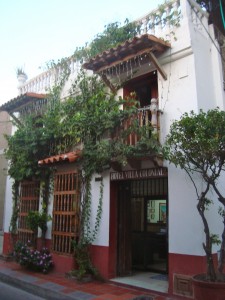 Hotel Villa was off the main road along a dingy alleyway. The building itself was welcoming with bougainvillea growing along the walls. The lobby had comfy couches and chairs. Our room was small. My mattress might as well have been a concrete slab. I loved the wooden shutters that could stay open with the protection from wooden poles prevented anyone from climbing in while have a sense of openness and fresh air. The fresh air was needed to try to rid the room from the strong smell of bleach. The room also had AC and TV.

Carlos & I changed out of sweaty clothes and then we scoped out Media Luna Hostel. A large menacing-looking German Shepherd greeted us at the door. After I watched him, I soon discovered this dog thought he was still a puppy. They didn’t have a private room for this evening or next but we were able to score an airy room for the last 2 nights. The room was much larger along the courtyard with adjacent pool. 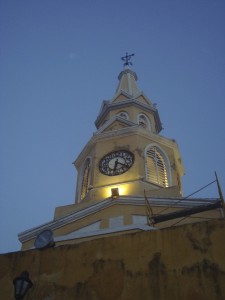 With business taken care of, we started to explore. The large park in Getsemani, Parque de Centenario was closed for construction surrounded by a large fence with green lining. A small section remained accessible in the NW quadrant of the park that currently held an outdoor book fair.

When Carlos & I entered the Historic Center through the Puerto de Reloj, I was immediately put off. People in traditional dress were performing. Plaza de Los Coches was lined with several horse-drawn carriages with emaciated horses that appeared to be extremely bored. A man with a tower of Colombian hats approached Carlos and placed a hat on his exposed head. Truthfully, it looked really good. I pretended to be impatient and uninterested hoping this would help Carlos’ bargaining power. He ended up getting the Colombian Hat for 15,000COP about $8 US. Carlos seemed happy and now looked like a Portuguese drug lord in his new purchase paired with his baby blue linen button down shirt and white khaki shorts. Career change in his future? 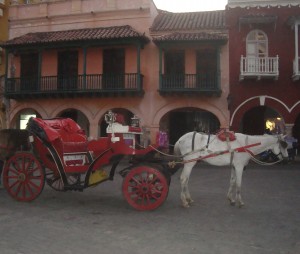 Growing up near St Augustine and spending quality time in New Orleans during my breaks in Grad school, Historic Cartagena didn’t take my breath away or leave me awe-struck like many travel sources suggest. I felt annoyed. The peddlers were incessant. Being hungry, this did not make me feel like being a patient spirit. Carlos was feeling ravenous, too. Since I felt like I had been a pain in the ass in regard to lodging, I wanted to leave the food decision up to Carlos in order to make sure he was happy. However, he seemed too hungry to make a decision either.

No options jumped out at us in Old Town so we headed back to Getsemani. It was surprising to see so many Italian restaurants. Passing some street vendors, my mouth watered looking at the arepas con queso. Carlos was having a hard time making a decision without a good recommendation from Yelp, his friends or the Lonely Planet. I couldn’t really knock Carlos for wishing he could confer with Yelp because I admit it is extremely helpful in making decisions when I am to fried to think. 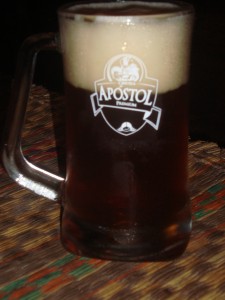 The side road parallel to our hotel had several mediocre looking restaurants. Almost back to Calle Media Luna, I saw a place with a mix locals and gringos. Carlos seeing the activity, shrugged his shoulders and said let’s do it. The appearance of the restaurant, people’s faces and plates did not get my hopes up that this would be my best meal ever. Carlos got the Plato de Res and I got the Plato de Verduras. My hunger was staved and my expectations were met.

You get to know a person when you travel. I would not expect Carlos to have such a sweet tooth. Like the previous nights, he was in search of a 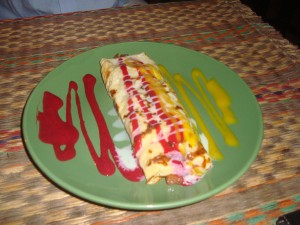 after-dinner postre and got me excited when he told me he saw a place that had Apostl. For me, I preferred a good Porter (my friend Porter would make a cheeky remark about now) or Stout with chocolate or nutty undertones over anything sweet. We checked the place out. Our waiter suggested a postre. When the crepe came out it looked like it was drizzled with mustard and ketchup. I was glad to have a cerveza over a postre.