Despite drinking copious amounts of water instead of alcohol, I woke up feeling groggy in addition to having cottonmouth. What the hell? I feel like a canary in a coal mine with small things are totally screwing with my homeostasis! The change of altitude has been a freaking bitch! After being back to sea level for almost a week, I had to adjust to altitude again! Starting in Medellin, 1500 meters (~1 mile). Then climbing a wee bit in Popayan to 1760 meters. This morning in Pasto, I am just over 2500meters (~1.5 miles). In Quito, I will peak at 2800 meters (~1.75 miles).

The only drawback of my room was it had a shared bathroom. This morning there was a man camped out in there retching and showering. Instead of waiting for a vomit tainted bathroom, I walked downstairs and found someone exiting!

Clean. I took to the streets to see if I could find a few items. Last night, I saw a Colombian equivalent of a $1 store that was about to close. This morning I went in and found a single metal spoon and fork for 1600 COP total. Less than a dollar! Score! It is the little things in life that get me excited. Next, I hit up my favorite Colombian grocery store: Exito to buy another bag of coconut granola because it is awesome; a small container of Kumi yogurt, not anywhere close to Fage but at least it is plain without artificial flavors; an emergency oatmeal drink for the bus, a banana, and uchuvas, a new favorite fruit. 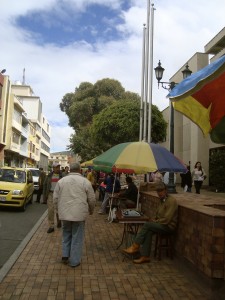 I took the long way back to Koala Inn in order to see more of the city. Remington typewriters have a new home: Colombia and Ecuador. Along the streets, men sit at mini tables ready to compose love letters or hate mail with devices that are able to be used off the grid and crash proof!

Back at the Hostel, I exchanged the Colombia bible Carlos gave me for an Ecuador version. The bastards who left my new book ripped a few chapters out. Fortunately, the previous owners were not interested in the Galapagos section which were the only pages I was interested in anyway. I already had the Lonely Planet for South America However, this make it harder for me to upgrade to the a Peru version.

This morning was bittersweet. I was super excited to be moving on to Ecuador but sad to say adios to Colombia. There have been so many good things I have heard about this country and it has all been true! Colombia ROCKS! Everywhere I visited had something amazing to offer (even Cartagena) whether it was delicious new culinary delights, excellent cafe sin leche, amazing vistas, gorgeous hikes, unforgettable bus-rides and beautiful beaches. Never have I met so many honest and helpful people. Plus, the other travelers I met on the road were pretty damn awesome too! 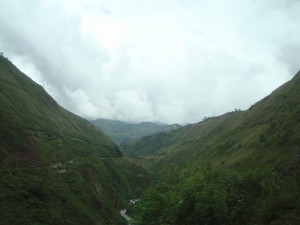 The journey to the bus terminal was much faster than yesterday. At the terminal, I got my ticket for Ipiales, the closest Colombian town to the border. The colectivo was to leave in 15 minutes. The other people waiting in the colectivo with me seemed impatient and for once it was odd that I wasn’t one of them. Two older men sat beside me started to speak to me in Spanish. I am now getting much better to be able to converse for longer periods of time without having to look up words or say, “como say dice…”. The questions were innocent for a while. I thought, Wow! Finally, there are some gentlemen. However, soon they became bold enough to ask about if I had or wanted any Colombian boyfriends. This trip, I brought photos to offer some proof that I did indeed have a family I cared about and a boyfriend (my most recent ex and me). My story: he just left to return to work after traveling with me for 2 weeks because someone has to pay the bills! This did not help. Not discouraged. Do I want a Colombian or Ecuadorian boyfriend now that he was gone? Oye! Conversation over! Time to get engrossed in a book and read up on Ecuador: history, customs and most importantly: food to try. I made a cheat sheet of food to eat and places to visit. Next stop in Ecuador: Otavalo.

My new friends wished me a good trip. The most important trip on my mind was the baño. On the way, a guy trying to fill a colectivo told me it was leaving now. Sure it is! I planned on taking a taxi to the border since I already wasted 45 minutes waiting in the other one and having to deal with men who think I want to fuck them because I am a blonde American woman.

Getting the border by taxi was a good call. Muy rapido. The formalities at the border were also quick and easy. Hearing there were serious scams in regard to money changers. Before arriving, I counted my money and calculated the exchange rate to determine what amount I would be willing to accept. After 3 separate negotiations, the 4th was the charm. I was able to exchange my Colombian Pesos for US greenbacks, used in Ecuador for only a dollar deficit.

After crossing the border, I had to get another taxi to the Tulcan bus terminal which only cost $.80. The plus side of Ecuador using greenbacks was it was easy for me to figure out what things cost without having to do the mental conversion.

Boy was I lucky, the next bus to Otavalo was leaving in 5 minutes. The man checking tickets showed me to my seat and sat down next to me trying to flirt with me. I was thankful for an ornery old dude who boarded who informed the flirtatious ticket taker to vacate his seat. I loved this man!

The bus starts to move…only a few feet and we do not move for another 45 minutes making the total sitting time inside transportation 1.5 hours. Then within ten minutes of departure the bus was stopped at a security checkpoint. The Policia boarded the bus and conducted random checks. Since I look like a major threat, I was asked for my passport. He took a long look at me. Did he really think I was up to no good? Or was he just wanting to gaze deeply into my blues eyes? Given the way men have behaving all day, I assumed he was taking advantage of the situation. 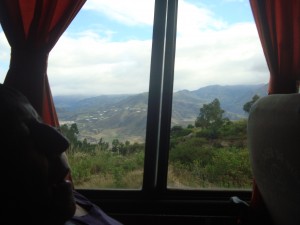 Another 3 hours on a bus. The scenery outside the bus was not much different than the Colombian side of the border. The only exception, I had the aisle seat. Trying to take photos out of a moving bus with zombies faces in the way with drool down the chin does not have the same effect.

Instead of getting dropped off at the bus terminal, I was booted off on the side of the Panamerican Highway. The other female who also got the boot, hailed a cab and asked if I wanted to join her. They dropped me off at the lodging I had randomly selected: Rincon del Viajero, gratis!

A lovely old gentleman buzzed me in and welcomed me. He had a private room WITH private bathroom with free breakfast and WiFi (the man called it WEE-FEE) for $12. It is kind of ironic that while I was traveling with Carlos, I wanted to stay in dorms to stay within budget. Now, this is the second night I have lucked out with a cheap private room. Even though he would pay the difference between the cost of a bed and half the private. My average was still $20/per night. 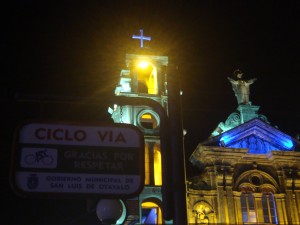 First dinner in a new country, I wandered Otavalo to check out my options. Otavalo upon first glance was a rather cute, prosperous looking town making me think the Saturday Market must brought in a lot of business. The town square was lit up in bright colorful lights and even broadcast free Wi-Fi. I passed a familiar-looking storefront called: Dude’s and Betty’s identical to a Hollister store. I went in. They were selling sweatshirts for $84.99 (no conversion needed)!! Seriously? Maybe I need to be stocking up on Hollister merchandise from the USA and start selling it here for a hefty profit! I have been actually wanting to buy some fake gear for cheap not for more money. Boo! 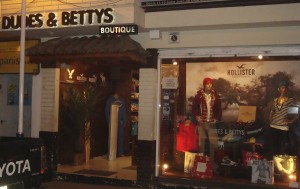 I peeked in a restaurant that looked promising with 2 locals eating and a decent menu. However, I turned the corner and saw they were sitting with an unattractive American woman. Oh well, the menu still looked good and cheap. The lady asked me if I was an American. “Yes (but so is everyone else from Canada all the way down to the tip of South America).” She lives in a small crappy town in upstate New York and owns a store that sells free trade goods from Ecuador. Freddy in western clothes and his traditionally dressed indigenous girlfriend dined with her. Considering she conducted business here, her Spanish sucked and her trying to speak it sounded like nails on a chalkboard. Please stop!

After dinner, no longer having a bald dude with a sweet tooth in tow. No postre search. Instead, I searched for a massive jug of water. Not wanting a headache or cottonmouth, I armed myself with a 5 liter jug of water! Suck it soroche!