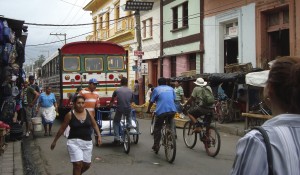 Yes, I was on the verge of getting sick, waking up to a sore throat. Glad I went to bed early without any alcohol. The alarm I set for 7AM didn’t wake me up, it was the sound of, “FUCK!!” when I accidentally knocked my Blackberry off my mattress hitting the guy below on the head. Oops. Later that AM I apologized. He said, “For what?” Concussion perhaps?

Despite being up early, breakfast didn’t start until 7:30. The first bus for Rivas left at 8AM with the following leaving at 9:30. In no mood to rush, I took my time. Allowing me time to have breakfast, visit the ATM, get money and wander through town. 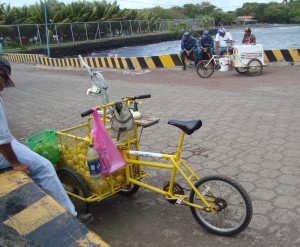 I caught the bus and arrived in Rivas in less than an hour. To get to the ferry that would take me to Isla de Omotepe, I needed to negotiate with a taxi. No need. A driver approached me. Another group of locals had already negotiated for the fare, $3 per person but needed 1 more person. Since I heard other travelers had paid $10 for the same distance I was happy to join. On the way to the ferry, the extra cup of coffee I had this morning was weighing heavy in my bladder, I had to pee. The taxi made a stop to allow me to take care of my business. Unfortunately, the extra cup of coffee this morning resulted in us missing the 11AM ferry. As I walked down the pier at 11:08, I watched the other ferry pulling away. The next boat was at 12:30. 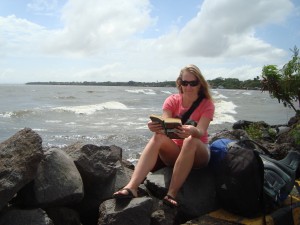 No worries. On the jetty, I spotted a cart of lemons. Life hasn’t given me any lemons, but that man looked like he had a tasty lemonade! I drank the sweet elixir and read my book pausing periodically to watch people around me. Around 11:30, a truck backed up to the ferry to unload goods for the island with a large proportion of the load including Tona beer & toilet paper! Once the truck left, locals started to queue up. Taking the cue, I filed in to la fila. Based on the number of people on the dock, the boat was going to be packed. I found an elevated platform for my pack and scored an aisle seat near the window. 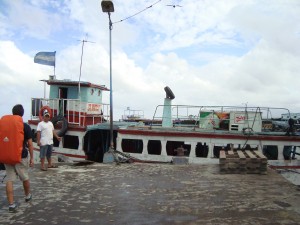 A couple that lives on the island boarded. The wife, Linda took the seat behind me. I offered the inside seat to her big Australian husband, Mark but felt bad because he had to contort himself to fit in I spot I easily could have sat. However, to this point, I am usually the one who suffers. Since I wasn’t feeling 100% and I did board 1st, I kept my seat. The couple lives in Alaska but sends the winters in San Ramon on la isla.

The lake was extremely rough. One of the crew memeber’s job was to bail out the boat the entire trip. The boat was overloaded. I wanted to read my book to distract me from the prospect of tipping over or sinking despite Linda attempts to chat. Ignoring her attempts for conversation until I finished the book worked in both our favor. I offered her the book and chatted the rest of the trip. She was excited to get a book since they are like gold on the island. In exchange, she shared with me the local gossip and things to do. They told me, if I visited the waterfall, to swing by their place or meet them out on Saturday at the Rodeo in Merida

A chicken bus awaited the ferry. Unfortunately, I was FILO, 1st in, last out. Therefore I was one of the last people to board the full bus and had to stand. Thus far, I have always had a seat for a portion of a journey. This was the 1st time I had to stand the entire time while getting pressed like a panini. I had to hold my day pack like I was 9 months pregnant since the overhead bins were too small. After an hour, I got off at the fork in the road to head to Santa Cruz. It was 2:50, the next bus to Santa Cruz was 4PM. The scale of the map made it seem as though it was only 5K away. A man had his colectivo was strategically placed waiting for impatient people like me. He tried to get $25 from the others but since I was starting to hoof it, he offered to take me for $10. Um, No, gracias.

Fuck waiting or paying gringa prices. I planned to walk and perhaps hitch a ride. A few others followed: an old couple from Sebastopol, CA, a San Francisco guy who lives in the Presidio and 2 other random stragglers. The older couple gave up when they saw an ice cream shop. The SF dude continued on with me. After about 15 minutes of walking through a gorgeous landscape, we heard a truck coming down the road. I hailed it. When it stopped, the 2 stragglers smiled and helped us into the back to join them & the other 2 Nica workers. At first, it looked as though the truck was carrying manure but upon further inspection I was happy to discover it was gravel. The truck stopped at the next fork in the road where they resumed their road improvement project. I bid adieu to the others that headed towards Merida, glad they went the other way since it meant less competition for a bed.

I walked a few more kilometers downhill to Little Morgan’s and was greeted by the owner, Morgan with his thick Irish accent. He only had a double bed left but gave it to me for the same price as a single dorm bed. Karma made up for the uncomfortable bus ride. The dorm was built like a tree house & overlooked the lake. When Morgan found out I was from SF, he gave me condolences about the 49ers. I said, “Fuck the Niners. I’m all for the Raiders. They are more gangsta!” As I said this, his eyes lit up and he raised the sleeve of his tee to expose his Raiders tattoo thus making a new friend instantly. He told me he was hosting a huge Super Bowl Party. Being an avid futbol fan, he has a complete Sport’s package and a small flat screen to keep up with real sports. As he informed me, “Baseball doesn’t count.”

Sorry San Juan del Sur, I think you are gonna get the shaft. I made a good choice coming here and knew I would stay longer than anticipated. The island felt magical. I was sandwiched between 2 volcanoes with halos made of a ring of clouds at each summit and surrounded by tranquil blue waters.

The only downside, there was not a lot of food options nearby. The guests were a captive audience subject to eating from the Hostel or taking a long trek. The good news, all the food was fantastic. My dinner was not a traditional meal by any stretch of the imagination: vegetarian lasagna. Rarely, even in San Francisco, do I eat Italian fare making it a welcome change. My meal was accompanied by a few Tona beers.

Two American girls from Minnesota and a Swedish girl joined me. They shared stories from their trip thus far mainly bitching and complaining. I listened until I finished my meal and beer then retreated to my palapa. It was more pleasant chilling in my hammock listening to the sounds of the wind, waves and geckos.