BANG. BANG. BANG. Drunk idiot banging on the hostel door woke me and a few others up. I got up thinking it was later in the morning. Nope only 7AM. The cafe didn’t open until 8AM. Sitting in the lounge, I met a guy named Ronnie who lives just outside of Lake Tahoe, Jackson. Jokingly, I asked him if he knew my friend Levi. OMG! Yes, he lived down the street from him growing up. I told him we were good buddies and he lives on the same block as me. Another example of how small the world is. 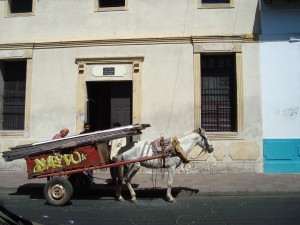 After a breakfast, I was not eager to hang around. I was not feeling like staying in Leon. One night was enough. I wanted to make it to San Juan del Sur. Stepping outside Bigfoot to grab a cab, I entered a different world than the night before. The town had come to life. People, taxi’s and horse carriages filled the streets. Stores were open. The markets were bustling with activity. Grey and black buildings from the previous night, turned into turquoise, pink, yellow and orange. A local pharmacy pumped Usher’s DJ Got Us Fallin in Love Again into the streets.

The bus station was filled with buses & colectivos coming and going. Soon, I was among the outgoing masses and onward to Managua with a quick transfer was to the Granada-bound bus. As passengers boarded, young homeless girls passed out printed slips of paper stating they were street kids in need of food, money & clothing. A little homeless boy came onboard playing a ukelele singing & playing his heart out neither of which were going to land him on Nicaragua’s Most Talented, but I gave him a few cords. It made me sad to see young kids in such despair and reminded me of my first day in India.
On the way to Granada, I thought about staying there for a day before heading to San Juan del Sur. I wavered back and forth since I was not really keen of hot & muggy Leon or grungy & littered Managua. However, as soon as the colectivo drove into the outskirts of Granada, I was immediately enamored. Granada reminded me of the charms of Antigua, Merida, MX and New Orleans. Like Leon, Granada was colorful but a little sleepier. 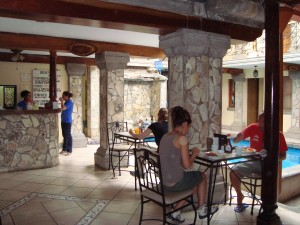 A guy at Bigfoot suggested I check out Oasis. At first, I was skeptical since I thought the guy was a douche. Once I stepped into Oasis, it felt as such. Oasis had 2 open-air courtyards: one filled with hammocks and rocking chairs and another held a “cafe” with coffee that never stopped flowing, a pool, cafe tables and TV with sitting area. The dorm room was open & airy. My top bunk had wooden rails to prevent me from falling onto the concrete floor below. Exhausted, I thought I would take a nap. After a few minutes, I couldn’t sleep and got up to explore instead.

The nearby streets were lined with vendors and was only a block away from the market which was open air and half covered. Walking through the covered areas, I was briefly mentally transported back to Bangkok’s open air street markets. The Parque central containing the requisite fountain and central statues was surrounded by a Cathedral, cafes and plaza. Each corner had permanent stalls for quick food in addition to other food stands. Some of the buildings housed small ornately tiled garages for the lucky few that had access.

Hungry for something easy and cheap but I not in the mood for street food, I peeked into a restaurant with a menu was written on a poster board listing 2 prices depending if you were going to eat in or take out. The meal was salad, rice, onions and carne a la plancha washed down with a Red Fanta. Not my healthiest meal on record but only 35C. 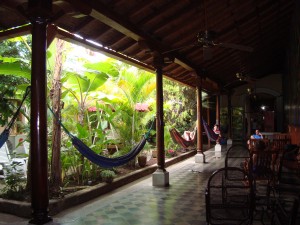 Back at the hotel, exhausted but not enough to sleep. I drank a few rounds of cafe and read a book in a hammock while listening to people watching O Brother Where Art Thou.

A question that nags at me: Why, when just sitting on a bus or other form of transport all day, do I get so tired? I came up with a new theory. When a car stops abruptly, your body continues to move forward if unrestrained by a seatbelt. An object in motion stays in motion. My body travels the same speed as the bus/colectivo/taxi plus the effort of transferring. So, my body is in constant motion despite the illusion I am actually at rest. Therefore, my theory the 486 kilometers traveled from Playa El Cuco  to Leon to Granada and the physically demanding obstacle courses on each leg of transport is probably why my body feels like I ran a marathon because I traveled almost 12 of them. Plus, tack on the visual stimulation rapidly passing my window my brain had to process it should be no surprise why I am exhausted.

Not hungry due to the large & late lunch. I forced myself to stay awake, drink a beer and nod my head as other travelers talked at me. At 8:30, when others started to get ready to go out, it was lights out for me.