The plan: get up at 6:50. Shower. Pack remaining items. Turn in key to safe. Leisurely breakfast with 2 cups of cafe con leche. Get the 8AM bus to Guatemala city.

Reality: Hit “snooze” which was really “dismiss” instead of waking in 10 minutes it was 50. World’s fastest shower. Packed remaining items. Turned in key. Ate quick breakfast with only 1 cup of coffee (good so I didn’t have to pee). Headed to get the bus at 8:45.

One bus was waiting at the main intersection but not for Guatemala City. The guy told me it would get me to Los Encuentros. The town was a major hub, I jumped on since I knew I would catch the GC bus quickly. Semantics, it was correct the 1st bus would “get” me to Los Encuentros, it actually took me to MEET the bus going there. As they say in South Park: That Bastard! Oh well, quick change to the 2nd bus leaving as I stepped on. Usually, I look out the window to watch the world pass by my window during my ride. This was more or less the same route I took from Antigua, therefore I listened to the Rosetta Stone Audio on my iPod and looked up words I did not know.

When we encountered Los Encuentros. The bus for Guatemala City was ready to go. The man opened the back door of the school bus, hoisted up my bag & helped me in. I resumed study since the passenger next to me was asleep. At one point, I looked up. A light-skinned, well-dressed Guatemalan man wearing glasses (I noted I hadn’t seen many people with glasses) was standing addressing the entire bus. Thinking it was Sunday, I assumed he was an Evangelist. Curious, I paused my iPod to hear his speech. First word I heard was leche. What does milk have to do with Jesus? Other words confused me: health, younger, happier, better digestion. What a second, this is a live infomercial with him peddling a wonder-supplement. Since, I’m quite sure he does not have to deal with the FDA (US Federal Drug Administration) he could make numerous claims without reprocussion on a Guatemalan bus. How much does he make? I could do that. Then again. Been there. Done that. Pressed play on iPod.

As the the only foreigner on a chicken bus. Everyone looks out for me, asking where I am going, giving advice on better/easier/prettier routes, time updates, showing points of interest or sharing stories. When it is time to get off, I always know. A bus station is easy to figure out. In Guatemala City, mine was a random stop along the road in the middle of the city. The conductor told me to get off as did a few others while others nodded in consent as I disembarked. If I have any doubt, the number of taxi drivers and/or touts waiting for me reconfirms

Guatemala City has several bus stations. I walked towards the local bus stop, ignoring the drivers to have a second to think. Not prepared with the local bus routes, I really was not eager to catch a local bus that may take an hour to get to Central Sur station. Standing at the bus stop gave me bargaining power. Me: “Cuanto cuesta?” Him: “70Q”. “No, 50Q”. “No is lejos.” “No es caro. Autobus bajo.” “60Q”. “No 55Q”. “Si”.

The driver took my pack and led me to his car at the back of the taxi queue. Why did the other drivers let him have priority. Were they on the LIFO method versus the FIFO? He asked me the typical questions and added some new ones regarding my job. So I was able to learn some new words like: desempleado, unemployed.

Central Sur station is situated below a freeway bridge which was strangely easy to navigate since the stops are listed on multiple signs. I found the bus for Monterrico leaving in ocho minutos. Yay! I could pee! Pero, necessito cambio. It took me 5 minutes to find the place to get change. This was the 1st pay toilet in the developing world I visited providing both soap AND toilet paper. Plus, clean and no squatting needed. 1Q well spent.

My backpack was placed in the front of the bus near the door since the bus didn’t have a roof rack. Therefore, shotgun. Another herbal salesman boarded the bus and made his sales pitch. Once he disembarked, a schoolgirl stood up and made a speech as to why we needed to buy her candy bars. I bought 2 for 4Q ($.50US) since she had been sitting near me without harassing me.

Shotgun was not frightening. Maybe, since we were close to the capital and the roads were good. I resumed studying. At some point, I feel asleep. Prior to traveling in India, it was always difficult for me to sleep on any form of public transportation. Now, it is like putting me into a cradle and rocking me to sleep. Next thing I knew, my bag had been thrown off the bus. I was told to get off. Confused, I thought the bus went all the way to Monterrico. Still asleep, I looked like an idiot. Dropping several items including my iPod, still playing my Spanish lesson.

Others booted from the bus also took seats inside the collectivo. A few people got off, the front seat was liberated the driver told me to sit up front. The remainder of passengers disembarked in Iztapa, leaving just me. The driver generously offered to take me to Monterrico direct, no stop, for 150Q. Not fully awake & despite studying Spanish the entire journey, I reverted into irritated cavewoman Spanish basically telling him that I would not pay la turista price. I got out.

No problema, across the street, 2 collectivos waited. One was going to Monterrico not just almost to or in the direction of for only 10Q. The other passengers were local guys wearing typical board-shorts and surf shirts. Oddly, being so close to the beach, the locals were lighter than the other people I have seen thus far in this journey. An old lady hopped on, she had 1 ear of corn and una botella de gasolina. The lady only had one tooth on the bottom gums. I thought, How could eat she that? The boys were obviously wondering something else based on the laughs & the lady smacking one upside the head. The gasoline was dropped off at a house and she disembarked elsewhere with her ear of corn. 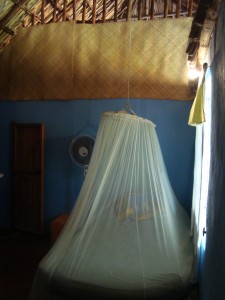 FINALLY, I was in Monterrico!! It only took 4 buses, 1 taxi & 2 collectivos. My Brazilian buddy, Cy, from Antigua told me to find her at Hotel El Delfin. It took less than 5 minutes to find. Opening the gate, a pregnant lady walked towards me named Becky set me up with a room a room with 2 beds and private bath for 70Q. She is originally from the States, Annandale, VA. Weird, I told her I lived in Old Town for 5 years, only a few miles apart. This got us talking for a bit.

I loved the place and my grumpiness evaporated. The pain in the ass trip, totally worth it. Not only for my 70Q did I get a private room but there was also a pool and it was located right on the beach. Only drawback was no WiFi but who cares. I don’t NEED to communicate with anyone as my family never seems to worry about my whereabouts unless they do not see a Facebook post for over 2 weeks or receive a ransom letter. 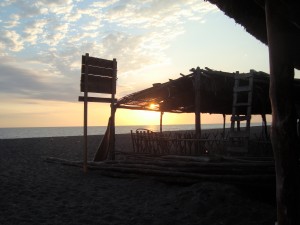 Paired with a rested liver & long day, happy hour was in order. The bar along the beach was where most of the “residents”, those staying longer than a week, were having drinks. Saul, a Guatemalan & Frances, from Quebec, both worked behind the bar, if you could call it that. Frances, traveling since September, works at the bar & makes necklaces. Two other girls were at the bar, a Canadian and Spaniard, Ana. My brain was fried from studying I was not in the mood to hablo mas en Español. The group looked at me as though I was a leper. Mainly, I would chat with Ana since she would not screw up my learning.

Monterrico didn’t have a crazy night life. A food stall had tacos for 15Q/2. He made them with pork. I asked for 2 con solamente verduras. I thought he was joking when he said dos con carne y verduras. While he was warming up the tortillas, I went across the street to grab water & a few bananas for the morning. Once I returned, the tacos were ready,

A dog accompanied on my walk back to the hotel. At a table on the beach, listening to the waves & looking at a million brightly shining stars, I began to eat my tacos. The dog was begging for some offerings reminded me of my childhood dog, Peppy. I wonder if he was in cahoots with the guy at the food stall. One bite into my taco, “You Bastard!” the guy was not joking. Cooks, like Mormons, are always trying to convert. Why do they think the can convert me into being a carnivore? Seriously, they should be happy I don’t eat meat, more for them. Luckily, Peppy, as I trained my old dog to do, faithfully sat beside me and received the bounty of discarded meat. The dog was my bitch the rest of my stay though sadly for him, didn’t get any more meat. Long day, full tummy, I retired.