Walking in the heat, I recalled the reason beer or wine are my go-to’s: my liver & I are cheap dates! Eating el typical for breakfast didn’t straighten me out. Packing was slow & inefficient. The plan: leave at 8AM. Reality: 10AM. Checking out, a Michigan couple inquired about how I planned to travel south to El Salvador. Glad to talk to others that defy the “Book’s” rigid south to north itinerary. I told them my path (right or wrong). 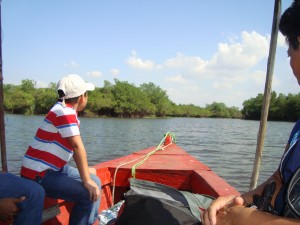 The ferry was only a 7-10 minute walk. At the end, I was sweating buckets. Detox? Was more humid than usual, too much crap in my bag or all of the above? I was right on time for the 10:30 ferry, next one would have been at noon. However, even when I don’t plan, the plan always seems to come together!

School kids in uniforms piled onto the boat. Many talked or texted on their cell phones. One of the school boys sat at the helm. The boat was small but made room for: 2 other scruffy tourists, 4 buckets of fish, 1 lady brought what she cooked this AM to sell at the next destination. The scenery reminded me of Florida making me nostalgic about kayaking through the mazes of mangroves. We passed the Bio Reserve, a few fisherman including hardcore looking fisherwoman. The ride took 20 minutes.

A bus waited for the ferry. Now, I’m getting used to the buses, when there is no ladder & roof-rack, I open up the back door, chuck my pack in and hop inside. The other touristas followed my lead as well as the 4 buckets of fish. Casey from Idaho and Gracie from the UK were the duo. Casey just graduated from University with a Finance Degree. This was his and his passport’s maiden voyage outside the States. Gracie, closer to my age, has been traveling for 5 months who doesn’t want to return to the UK and plans to live hand to mouth as long as possible. They had the same route as me and we joined forces. 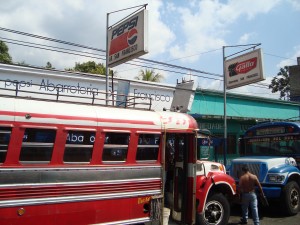 Originally, I thought we would have to travel through Taxisco per the Lonely Planet. The fare collector told us to stop in Chichi to catch the bus to La Frontera instead. I sat down and enjoyed the view outside the window of the bus. Before Taxisco, there was a massive water park called H2Ola in the middle of farmland. The driver also served as DJ. Viva el disco! So instead of heading to Taxisco, he was taking us to another “Funky Town”.

Arriving in “Chichi”, short for something I cannot pronounce or spell, was our connection to the coach that would take us to La Frontera. For the first time since I arrived in Guatemala, the bus was not waiting for me. My companions were also hungover and did backflips when they saw a place selling pizza by the slice. I was still satiated from breakfast and hung out on the side of the road reading my book. Casey returned with pizza in one hand & a banana smoothie in the other. Well, that changes everything! I went to get an AH-may-zing smoothie! I can’t live a day without a banana! 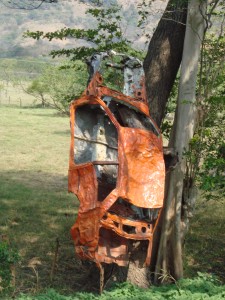 La Frontera bus arrived 20 minutes later. The Guatemalan roads traveled on thus far have been really good. After 5 minutes, the bus turned onto an unpaved road with potholes big enough for a Smart car or Mini Cooper to fit inside. Cars, cargo trucks and buses weaved along the road trying to avoid making impact with the opposing traffic while weaving to avoid the potholes. This journey everyone made it out unscathed. I captured a photo of a vehicle that was not as lucky. This road is like the road from the border of Belize heading for Tikal & Flores. Does the Government of Guatemala keep the border roads in complete disrepair as to discourage people crossing via land into the country? 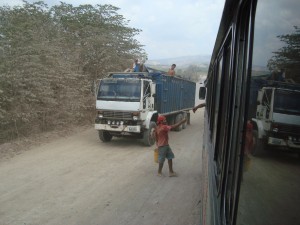 Seeing more action: vendors, tiendas and restaurants, I knew we were close to La Frontera. The bus stopped. The trio walked to immigration. I got my exit stamp and flagged down a money changer. I’ve made the mistake in the past by not changing currency early enough and got stuck with Laos Kip and Indian Rupees. Gracie & Casey acting like the all-knowing authorities, said I would get ripped off. My associate & I took care of business. The Quetzals I had on hand was worth $160-170 depending on the rate used. Usually, I have a lot less when it comes time to leave a country. For me, it meant I was under budget. I was offered $158. Giving it a go, I countered $165. Surprisingly, no counteroffer, I received $165 greenbacks and held my home currency again.

Casey waited for me in a bicycle rickshaw, I hopped in. Gracie was ahead of us. Getting out of the rickshaw, Gracie introduced me to Eron an El Salvadorian man who also lives in LA. Distracted, I started talking and walking with them when it dawned on me that I felt a bit lighter. At that moment, Casey called my name. He laughed because he was waiting to see how long it would take for me to realize my pack was still on the rickshaw. Hello, blonde moment!

The El Salvador border control was slow. The border patrol looked through my passport and inquired about my destinations. My 4 Guatemala stamps confused him. I had to explain in Spanish it was 2 separate trips. Why does the US border control never stamp my passport? Satisfied, he let me in and gave me a very decorative.map of El Salvador.  I still like to create old skool albums of my trips for my coffee table and this would be perfect. Gracie scoffed at me saying she NEVER uses maps. La-tee-da. She was just being a hater because the guy didn’t like her enough to give one to her. Plus, she had no vision. 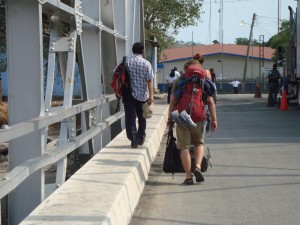 Eron waited for us. I talked with him while NOW Casey & Gracie changed their money. Since they gave me shit, I asked them what they traded and what they got. They were the ones who got ripped off but I decided not to tell them or rub it in. Eron appointed himself as our guide since we were traveling the 1st leg together to Sonsonate before hopping on yet another bus.

Eron spent most of his life on container ships based out of LA. What did he think about living in the States? Eron is a very articulate man without a strong accent who was very open without holding anything back. He HATED it because he disliked people treating him like a 2nd class citizen! Eron was insulted because he felt his education was much higher (stating as bigger brain) than many of those who acted condescendingly to him. Then he dove into political issues which I really didn’t care to think about. Once I left DC and moved to San Francisco, I purposely have turned into an ostrich, happily sticking my head in the sand. I get my news from headlines, The Daily Show or Colbert Report. I made the decision, life is too short to get stressed about things beyond my control. Living in DC for 5 years took 15 years off my life that I wanted back. Fortunately, he was interrupted when the guy came to collect the fair. I quickly got engrossed in my book again.

Eron escorted us to the other side of Sonsonate’s bus station to see us off. He talked to “the boy” to make sure he knew where we needed to go. It was very sweet & kind of him to be so protective, like we were his kids or something. We wished each other a safe journey. It was 5PM already, the next stop was only an hour away in Santa Telca. This bus had plush seats, curtains and sans chickens. No one sat on my lap or rubbed up against me. I felt like a big girl with my own seat.

The comfort was short-lived. The next & last bus to take us to Playa El Tunco was a CROWDED chicken bus. It was so full, I almost had to grease myself up to get in. I was happy my backpack cover was fixed because it was chucked on top of a greasy spare tire. Casey put his on mine & Gracie used hers as a seat. The Book says under no conditions should you ride a bus after dark. It wasn’t dark yet but sky was taking a firery orange hue. Casey got nervous. The bus was fine. No thugs. No problem. With exception of the questionable characters who had the nerve of offer the 2 white ladies a seat! The horror! The key point is not to believe everything you read. Then again, your reading this.

Casey & Gracie asked me where I was planning to stay. Someone had recommended, Las Sombras, it was also included in The Book. Once again, Gracie got high & mighty that she NEVER stays at anything listed in that book. “Funny, you stayed at Johnny’s Place in Montericco listed 1st in The Book. You full of shit Bitch”, I said in my head. While aloud I said, “Call me lame, I like to at least have a destination or starting point on arrival and check out my options rather than wandering aimlessly. You, of course, don’t have to follow me if you don’t wish to” hoping she wouldn’t. Generally, I try to get along with people, Gracie just got on my nerves. One of the things that annoyed me the most, other then her miss know-it-all attitude, was her damn tongue ring. I thought they were unattractive 15 years ago and even more ridiculous today.

On arrival Gracie & Casey followed me to Las Sombras which looked good but the person to talk to just headed to dinner. Talking to other guests, it seemed there were only 2 beds available. Despite Gracie’s snide remarks she planned  to wait for the guy. Casey being the faithful companion was eager to wait too. Interesting, code says I should get it since I picked it out! I had no desire to hang out Gracie any longer. They waited and watched my pack as I explored other options. 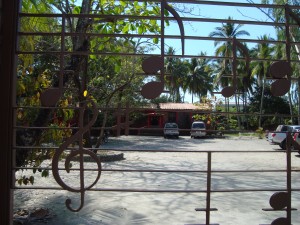 After 5 full/mediocre places, I found a sweet spot at La Guitara. This was slightly higher than my usual budget. In my current state of mind, I didn’t care knowing it was way beyond Gracie’s budget & I would be rid of her. When I got my pack, they were still waiting. I got settled into my lovely new room and showered. Across from my new home, there was a cheap place to eat, I scored 4 tacos & beer for $3.50! In the middle of my 2nd taco, Casey & Gracie passed on the street. “Settled in?” No, they were still waiting.