Since the bus wasn’t leaving at the crack of dawn, I slept in as late as possible. Once up, one of the girls brought me cafe con leche y yogur con fruta para llevar. Anto told me all I had to do was step outside, less than 10 meters, to catch the 8AM bus to San Miguel.

At 7:55, I stepped outside the compound to wait. I watched a dog skipping down the street in a zig-zag pattern peeing every 5-10 feet. He looked happy until he approached me. Maybe I was in front of his pee spot or my glasses & smurfy blue pack intimidated him. The dog’s disposition changed and started barking as if he wanted to attack me. My pack was on, making it nearly impossible to reach down to pick up rocks to hurl in his direction (don’t sick PETA on me, only to be used self defense). Before I used the next best thing, my water bottle or cup of yogurt, Blanca, one of La Tortuga Verde dogs came out to my rescue. Blanca barked back as if to say: “Piss off, this is my domain & she’s with me”. Blanca stood watch next to me until the bus arrived at 8:03.

The bus route passed through several small towns, all the activity outside the bus paused as adults, kids, dogs, chickens, chicks and pigs stopped to watch & wave as we drove by. Men wore their requisite Stetson hats and machetes. Women dressed very feminine wearing make-up, sandals and skirts/dresses under their ornately homemade aprons.

At San Miguel station, a dispatcher, Edward, approached me to ask where I was going and confirmed I was in the right spot, “Quince minutos.” For the next 15 minutes, we chatted. He was from San Diego. His 2 adult daughters & son who he misses dearly still live in the US. His youngest daughter who is 8 lives here with him. Edward lamented being young and stupid, he got kicked out of the States for dealing drugs 15 years ago. Now, he feels like a stranger in a strange land. Not being born here, he doesn’t feel at home in El Salvador. He worked his way up to his current position and confirmed I was right about the career path: money changer–> driver–> dispatcher. The bus soon arrived. I told Edward goodbye and maybe I would meet him again in one of the San’s. I boarded behind Jerry Seinfeld’s El Salvadorian doppelganger who wore a shirt tucked into jeans with white sneakers. 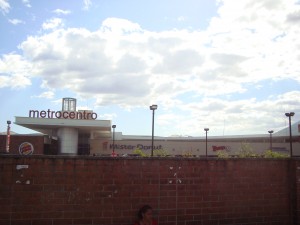 One of the stops out of town was Metro Center, adjacent to a large mall with movie theater and several fast food joints: Burger King, Wendy’s, Pollo Campero, KFC & Mister Donut. I prefer the other fast food: vendors who boarded the bus. The “fast food” vendors quickly hop on & off with their papussas, bebidas, dolces y comidas otras. The ladies wear ornate aprons to hold money to keep their matching clothes from getting soiled. Water is packaged in thin plastic sealed baggies helping to avoid bulky water bottles. Considering the amount of waste seen along the roadways, at least there are less water bottles but waste all the same.

Edward tried to convince me to take an alternate to the chicken bus. Telling me it is safer. Being a solo female on the chicken buses, I have felt completely safe. Of course, making certain precautions: keeping valuables close, locking the zipper to my purse & trying not to look like a complete moron or easy target. Staring out the window, I guess I could understand people’s concern about safety. Looking at the buildings and fences surrounding homes/business none are without a “security system” of either barbed-wire atop of fences or broken glass bottles imbedded at the top of the concrete walls. These are more apparent than the electric security systems with or without surveillance & locks/deadbolts on our doors we rely on in the US. The State Department would like us to stay in these cozy nooks by telling us about the extreme danger of going anywhere. Yes, there are many dangers in the world but being aware of the local risks at home or away, you can make precautions to stay safe and out of harm’s way.

The landscape changed from urban jungle to jungle to dry barren land as I approached the El Salvador/Honduras border, El Amatillo. The hills that I had been accustomed to being covered with trees now were bare and looked like large anthills. 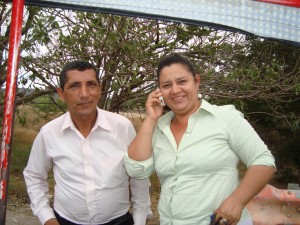 The bus stopped ~10K prior to the border. My options: catch another bus or tuk-tuk. A Salvadoran couple hailed a tuk-tuk and invited me and another local man to join. It took a while for the tuk-tuk to start. The problem was fixed when the driver added gas. The overloaded tuk-tuk barely made it up the hills. The man & woman were work colleagues. She was on a “ride-along” with her boss, selling supplements. The lady was new to her position, 6 days. She laughed when I shared that my job in the States was lo mismo.

Leaving El Salvador was uneventful. Entering Honduras, 2 overly-helpful men handed me a form I needed to complete & pointed me to the line I was already standing in. I needed to pay a $3 fee. One was trying to get me to hand him the fee. “Donde esta su identificacion?” He pointed to his belt buckle that did not show any legitimate information other than holding his pants up. Needless to say, no $3 for him. Smoothly, I dealt with the official Officials & was off to catch the chicken bus to Chuloteca, then colectivo to Honduras border. Although, this is my maiden voyage in Honduras, it wasn’t on the agenda since no spots along the Pacific inspired me enough to stop. Sorry Honduras, next time.

The bus was relatively empty, less than 10 people. I sat in the last seat on the bus next to my backpack. Although, I know it was of poor taste, I took advantage of extra time gave my gross overworked feet some love. My friends Sharon gave me a gift of a small female “emergency kit” that had a nail-polish remover pad, nail file and clear polish. In my other medicine/ hygiene kit, I had body wipes, pedi lotion, clippers and orange stick. I turned my seat into a spa.

Studying my Spanish, the money changer asked me what I was doing and eagerly talked with me to help me practice. My Spanish is starting to improve. With him, I did not have to say “un momento” while searching my dictionary or “como se dice insert [English word]?” or “que es la palabra (while mimicking an action or drawing a picture)?” as often.

When the bus arrived at my next connection, fortunately, the colectivo for the Honduras border was at the same station, full & ready to go. There was barely room for me requiring me to keep both my overstuffed day pack and purse on my lap. The hour ride, was extremely uncomfortable but thankfully I am no taller than 5’5 or it would have really sucked. Few things were out of the norm to keep me amused with the exception of 4 men hitching a ride with a semi-truck while holding onto the cab with one hand & each holding an iguana in the other. I pondered the reasons why they would be doing this until we reached our stop at the border. My eagerness to exit the colectivo was inversely related to the number of eagerly awaiting touts that surrounded us.

I grabbed my bag and tried to cut through the barrier of bicycle rickshaw drivers. One was unshakable. It was a 3K walk. He said he would stop at each checkpoint and take me to my next mode of transport. “Cuanto cuesta?” “You pay me what you feel is reasonable.” Fine!

Left Honduras as quickly as I had entered. While the driver peddled to the next stop, he negotiated to get more business. “Necessita cambio?” Of course he could change. The Nicaraguan Border took more time but while I waited I spotted an ATM. Score! Money! No need for the rickshaw boy’s services. When I tried to pay the driver my idea of reasonable, since I didn’t want his services, $2 US for the fare. He said it was not good enough. Annoyed, I offered 16 lempiras (just under $1US) to make the total ~$3 (which fits my $1 per/K rule). He thought I didn’t know the conversion of cordobas & tried to get cute by saying “No, hard work. You give me $2 US plus 100 cordobas” ($5). $7? Told him “Este o nada!” Got out and walked to the colectivo to take me to Chinandega. The driver told me it would be 100C. Then I saw a Nica pay 50C. Maybe he is getting off early. Nope, he got off at my stop too. Oh well, can’t win them all!

Getting closer to my destination, happily I watched the sun setting to my right & Volcan San Cristobal smoking to my left. Arriving in Chinandega, an older lady told me she was also headed to Leon. Reminding me of the old lady that helped me across a busy street in Vietnam, she acted as my guide, grabbed my by arm and dragged me along with her. We rounded the corner to a large parking lot with colectivos in the far corner. As we neared, one by one they the drove out of the parking lot not concerned we were walking towards them. They didn’t go far, all parking around the corner on the same street we previously were waiting.

The driver charged me the correct amount & drove off like a madman. The 45 minute trip to Leon only took 25. He passed other drivers coming within inches of oncoming traffic and almost ran a motorbike off the road. Was he training a Nica stock-car driver? At the terminal, I was thankful to be in the company of 2 Mormon missionaries who disembarked 1st distracting the taxi drivers that swarmed them. I slipped out of the collectivo to walk into town.

Based on the scale of the map, it appeared to be ~2K to my destination. My legs needed some working out after a day of being cooped up. Leon was a ghost-town. Few people walked the streets. Everyone appeared to be inside their homes with their families. It is easy to be a stalker in this town. Most homes keep the door open behind the cast iron gates allowing those who pass see inside. The cobblestone streets were lined with open gutters separating the elevated tile sidewalks. Leon could be a “before” picture for Georgetown in Penang, Malaysia. In the dark, I had to watch my footing, but was sure I didn’t have to worry about tiles breaking and falling into the cesspit like I did in Georgetown.

The place I hoped to stay, VIA VIA Hostel, was full. Bigfoot across the street, welcomed me with open arms. It was 8PM and the party was getting started. I didn’t waste time removing my sweat-soaked clothing to savor a nice cold shower. By 8:15, I had my laptop powered-up, connected to WiFi and ice-cold Mojito in hand.

Bigfoot felt more like a Frat House than Hostel. Drinking games were in full swing. Girls complained about being 26, almost 27 years old, “OMG, I feel soooo old!” Random people tried to talk to me but I was not in the mood. Half of them, in my grumpy-tired-traveled all day-everyone can fuck-off state of mind, I thought were complete idiots & not worth the effort of pretending to care. I preferred to IM with friends & family I had been neglecting the past several days since I they would provide more interesting conversations. Once getting my quesadilla & 2nd mojito, my spirits lifted a bit. However, when a guy came over to me and said, “Dude, you came all the way to Nicaragua to sit and type on your computer” and I felt the urge to punch him in the face, it knew it was time to call it a night.