Woke up at 11:00. HUNG. OVER. The only thing getting me out of bed was eggs. Only 30 minutes before the free breakfast ended. On my way, I bumped into Harry walking downstairs. Apparently, he laughed when he saw me & inquired as to how I was feeling. “I don’t feel like I won 3-man!” In the restaurant, Roy’s girl also looked like death, trying to disguise it by wearing the huge Prada sunglasses while reading her book.

Harry joined me while I ate my breakfast and drink 1 of 3 glasses of coffee. He was trying to hurry me along to pack and go with them to stay the night in San Pedro. I was not feeling like rushing but agreed to meet up with them later because I planned on kayaking. Plus, I did not want to have to pack up today and contend with having to catch the boat the next day to make the bus to Montericco.

Nick appeared who also invited me to come and told me I would not have to play any more 3-Man. The others headed out to the street. Nick told me he hoped to see me later but just in case, he gave me a big hug that lifted me off the ground. I totally love it when men do that. Boo, my luck, another cool guy, bad timing.

Uno mas cafe, por favor. Y uno mas. I headed back to the room, plopped down on my bed trying to motivate myself to shower and get on with the day. My headache was above my usual threshold for meds, I contemplated the ramifications of taking anything that may add strain to my already overworked liver from the previous night. All of a sudden, the bed began shaking for a good minute. Earthquake? Should I move a few feet to stand in the doorway? No, I will take my chances. Later, I discovered it was a 6.2 earthquake 100 miles of the coast of Mexico, Chiapas.

Showered. Laid on the bed. Contacts in. Bed. Clothes on. Bed. Day bag prepped. Bed. Come on, there is sunshine outside. 3, 2, 1. Walked out the door. 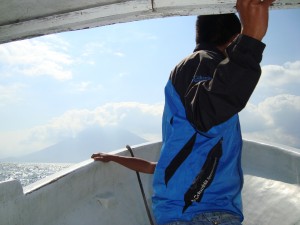 Perhaps, my procrastination helped. I arrived and hopped into the boat just as they were untying. I should have taken something for my headache because it was a bumpy ride. The man in the front was holding on for dear life since he got lifted off the seat a foot each time. Being a man, I am sure that could not have felt good.

No touts to greeted the boat, much to my surprise. San Pedro was super chill. I walked the streets and watched the locals go about weekend activities, fruit market, visiting with each other. At a coconut stand, I helped a old lady figure out the complicated task of buying a coconut and ordered one too hoping it would help the hangover. I wandered the alleys with no real destination. 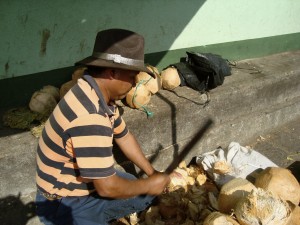 When I made it back to the main road, a guy was sitting on the corner asked “kayak?” It did not annoy me since YES, I did want a kayak and he only wanted only 25Q and I got him agree to 20Q. As we walked along, I looked up and recognized a familiar face. Paddy my long lost English buddy and former roommate in Belize was walking towards me. We hugged and updated each other on the happenings of the past month and half. Also, I shared news on 2 of our mutual friends: Morgan and Bart. Morgan came to hang out in San Francisco near the Christmas Holiday but is now back in Amsterdam. Bart and I had corresponded a bit but Paddy would not run into him since he flew back to the states the same day I flew into Guatemala. Small world!!

The kayak guy was patient during this whole discussion. He stopped midway down to the dock, pointed and asked for the 25Q. I shook my head and only paid him once I knew everything was kosher. At the “dock”, a man was working on refurbishing his fleet of kayaks and making paddles. The pole looked like it was recovered from another item. The paddles were made out of fiberglass with jagged rather than smooth edges. 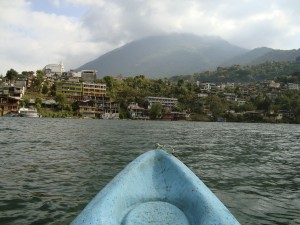 Despite the appearances of the kayak and paddles the ride was excellent, quick and responsive. The water taxi’s that were coming and going created some serious wake, making it fun to negotiate the waves. I paddled to a nearby lagoon. This area was very peaceful with the exception of a local on a paddle-board chasing the birds floating on the lake causing them to scurry and fly away. A few fisherman were scattered about. From far away, there were many plastics bottles floating on the water making it look like it was covered with trash but realized they marked where the fish traps were located. The view of the surrounding hills and Volcanos in the distance were difficult to see do to the haze.

I could have spent much longer cruising around the lake but I needed to turn in the kayak and catch the last ferry back to Panajachel. The ride back was much smoother than the ride in with the exception of a few rough waves that splashed everyone in the front rows. Since it was Sunday, the vendors were more interested in visiting with each other than chasing down las turistas. It was evident that most of the locals do not live in this area of town because the town was relatively dead without the types of activities I would usually witness on a Sunday in a small Central American town. Dinner was a result of hopping along the food stalls along the street made a meal of hopping to a couple food stalls eating whatever the specialty. Spending less than $1, I was stuffed. Desperately in need of a detox, there was no partying for me. The night was spent I had to preparing for a long day of travel. Mañana, voy a la playa!