Alarm: set for 6:15AM. Goal: catch 7AM bus. Awoke: 6AM before the alarm. Wow! I’m getting into the zone. Finally, any of my conscious & subconscious stresses have evaporated. I laid in bed for a few moments listening to the same birds that woke me the previous day.

In the zone indeed, not trying, I was fast and efficient. The collectivo directo swooped me and another passenger who was standing on the side of the road at 7:05. The other passengers on the bus were dressed and headed to work in San Salvador despite it being a Saturday. An hour later, our collectivo came to a crawl as we approached San Salvador. I looked the other vehicles sitting in the traffic jam. A female driver next to us applying mascara, taking advantage of being stuck using the time wisely to finish her morning make-up routine.

Slowly, we made it to Terminal de Occidente. I was dropped off at the West Bust Station but needed to be at the East, Terminal Oriente. Therefore, I had to catch a cab. Surveying the street, I was interrupted by the food vendors. “Se necessita Taxi?” “Si.” “Un momento,” the guy said as he called either a friend or family member. Whomever they were trying to hook up was unavailable. I asked “Cuanto cuesta?’ The man said, “Cinco, no mas.” He winked and the lady next to him shook her head in agreement.

Little did they know, I can hail a cab like no one else and knew they were full of it. The information was useful because now I knew the elevated rate. There were plenty of taxi’s driving past. A driver across the street flagged me down and asked for $4. I counter-offered with $2.50 and we settled on $3. The couple inquired what he was getting, he proudly held up 3 fingers. Damn, coulda gone lower. However, putting things in perspective. Based on the length of the trip, I would have had to pay $25 in San Francisco.

We conversed. The only question he asked me differing from the norm was: Why I was so pretty? How do I answer that? Should I tell him my beauty was thanks to the supplements they were selling on the buses in Guatemala? How do I say genetics in Spanish?

At the bus station. The backpack was already on, duh, my back (note: the heavy big one) & my back/ day-pack (the important one) in my hand. A man tried to grab the day-pack & “help” me to the bus. People taking my backpack, no big deal. You will get stinky clothes and other easily replaceable items. If you run, I will catch you in a heart beat and see that a “harmless” looking blonde can turn into one of your worst nightmares. You can pry my day-pack out of my cold dead hands!! With my grip firm, he let go and went to find someone else to help. I found my bus and boarded.

Without many people on the bus, figuring I had 10 minutes. I went to grab coffee. The lady was annoyed I did not have anything less than $1. When she returned with change, I said, “Ahora, tengo cambio” with a smile. She wasn’t a amused and didn’t return my smile. I heard yelling. Shit, my bus with Backpack was moving. I ran to catch the bus and spill a few sips as I hopped on through the back door.

Since I left earlier than I had for other day trips, I forgot my system is like clockwork. Of course to exacerbate the problem, I HAD to get a cup of coffee! However, I would have remembered this if I had my coffee first since it tends to bring more oxygen to my brain to stimulate deep/productive thought. Hence the vicious cycle. Damn! I thought about my CCFA (Crohns & Colitis Foundation of America) buddies & honoree. At least I knew I was solid and could wait, unpleasantly, for a bit. Also, I left too early for food but not to worry, ladies donning frilly aprons with papusas, tortillas stuffed with beans, cheese and vinegar slaw of peppers atop, board the buses frequently enough. For breakfast, I was able to get 3 for $1. 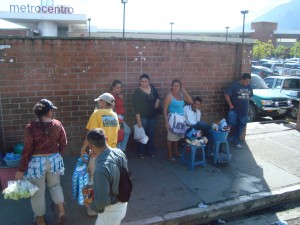 On the way to San Miguel, I was engrossed in my book. I saw people getting off but knew it was not my stop. The lady next to me told me I had to bring my bag, it was a police checkpoint. Men were lined up towards the back of the bus, the women in the front. Everyone’s belongings were getting searched. The female officer rummaged half-heartedly through my purse and day bag. Then, we both looked down at my backpack, I thought, “Please don’t search it, I don’t want to pack it again.” Perhaps at the she thought, “Shit, I don’t want to deal with this bag.” Our eyes met at the same time. I smiled, she smiled pretending not to see the bag and moved on to the next passenger. In a few minutes, we all were allowed to board the bus again. Everyone taking the same seats as if they were assigned

Once we made it to the San Miguel bus station, everyone got off. The driver and attendant would not let me get off. San Miguel, Si? Si. I watched the bus back into a spot in a fashion that would impress the most strict Driver’s Ed Instructor. The attendant took my backpack and led me to the El Cuco stop. I love front door service.

Thankfully, the bus had not arrived. Happily, I had change ready for el servicio and took care of my previous issue. The buses, which I am comparing to those of SE Asia and India, are extremely efficient but it is hard to maintain my body’s fluid homeostasis. Only once did a bus stop at the side of the road to let a little boy pee. Despite wearing a skirt or having a sarong handy, call me bashful, but I get enough attention without making a bus stop and allowing a full bus watch me water the flowers. So, stay on the dehydrated end.

Today was good: only 3 legs shorter than my journey to Monterrico. Only 1 hour left until another beautiful beach. We passed another volcano and entered another lush hilly area. The road seemed to just keep weaving upward, I sat next to the window and gazed at the valley below with the green hillsides that seemed to go on forever. To enhance the experience, the driver selected appropriate artist: Pitbull.

At one point, it dawned on me the lack of Internet had been a bit annoying but it kept me in the now. All the trivial things that consume me regardless of how I try to fight it when I’m home. It has only been 2 weeks, any worries real or trivial I can no longer remember. It is great just to BE, have a blank mind and enjoy each day. Life is good!

The bus stopped in El Cuco. A lady informed me that I could walk to La Tortuga Verde it would take about an hour. An hour walk no big deal. An hour with my backpack and day-pack, not so pleasant. Travel days always make me want to chuck everything out of my pack. There were not “proper” taxis just pickup trucks. Do I really want to deal with this? I passed a young man, he asked me were I was headed. Reluctantly, I told him. He offered me a ride gratis. In my mind, I weighed the options: walk an hour, ride on one of the truck taxis stuffed with men that were already staring at me licking their chops or accept kindness from a stranger that could possibly rape or murder me. Still in my blissful state. I trusted that all was right in the universe and accepted the ride. Does this count as hitching?

The driver of the pick-up truck’s name was Omar. It was a short ride but he told me about the area, his life and his family. I briefly told him about myself. He brought me as promised to my destination without asking for anything in return. One of the people from La Tortuga went to his truck as I went to inquire about a bed. Perhaps he got a kickback? Didn’t bother me. I got a large dorm room to myself for $6/night.

The room had 3 double beds, a couch, a shelf to lay out my stuff. Three walls were nothing but screen separated with wooden beams to support the corrugated tin roof. At first, I was worried about the security of my money and laptop. Later, I noticed the police station was right outside the gate. Also, I was staying near the staff quarters. No one would go into my room unnoticed, including me.

Bart, I traveler met in Belize recommended I come to stay here and he did not steer me wrong. Starving, I sat down to my 1st real meal of the day. An English dude, Anto (short for Anthony), came over to see if I wanted to use one of their extra devices to gain Internet access. After having my revelation on the bus, I told him would pass. Before coming here, he worked in Honduras and has been working here since mid-December helping the owners with marketing and website. Soon, they will have equipment to start up a microbrewery.

While I was enjoying pumping some calories into my system, a table of drunk guys kept trying to get my attention. Hey BayBay! Hey BayBay! Hey BayBay! I did not flinch, look or acknowledge. Guys, FYI, if you want my attention, you have to do something a little more creative and/or funny. The guys then thought they would change the approach and win me over by them deciding to say some pretty vulgar things to me. Anto came to ask me if I would like him to do anything. I said for now, I was fine. But asked if things got worse, would it be ok to hurl my coconut at them. All they were trying to do was show their machismo with the other guys that looked like12 year olds. Studying Spanish I learned that macho both mean manly and big banana.