Going through the usual formalities to enter a new country was smooth. The Guatemala City Airport is only 2 years old and made me think even SFO could use a face-lift. The service was brisk and my backpack arrived promptly despite the cover coming off and having almost belched out a few of my clothes. Since I was traveling solo and maybe looking a bit harmless, I got to skip the scan and search portion of immigration. Little did they know I was packing raisins.

Once I made it outside, my driver was standing in front of all the hordes of people outside the airport. I could not believe my eyes! I was shocked because I am used to my pick-ups being late, in the wrong side of the airport, having to call the hotel or forgot to write my name on the placard. This was too easy, I jumped into the cab for the hour drive to Antigua. 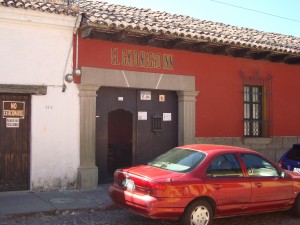 The arrival into a new country is always exciting for me, although, a bit hazy. Everyone suggested to skip Guatemala City due to the high crime rate and the slovenliness. I would not have known seeing all the Mercedes and upscale car dealers. The signals of suburbia was there: McDonald’s, Pollo Campero and Taco Bell which looked like an actual restaurant. At 12:30AM there were mainly only taxi’s or semi’s on the road with the doors ajar showing the number of “extra cargo” in the back.

Driving over the cobblestone streets woke me up, I must be in Antigua.

I had a reservation at the Black Cat Hostal but they were full the driver took me to the sister property at the El Negro Gato Inn. This place had private rooms and dorms. The dorms were a cheaper option only $8 per night and were not much to look at and the only locker was a cubby the size of a small post office box. 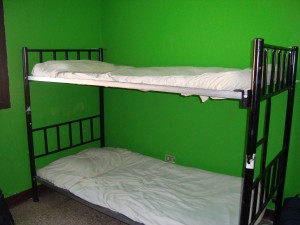 Once settled in, I dropped down into my bottom bunk exhausted ready for sleep. Oh but wait, the party was just ramping up. The nearby club was pumping Rihanna, Pitbull and Enrique Iglesias and I am sure quite a bit of fist-pumping going on as well ! Earplugs inserted….ZZZZZZZ