I woke up in time for the free breakfast today at 8:30AM instead of sleeping until 1:30. Baked Mike was in the cafe finishing breakfast, drinking coffee and waiting for his shuttle to the airport when I went arrived. I ordered a Guatemalan Breakfast: huevos fritos (fried eggs), frijoles (beans), plantenos (plantains) y tortillas, jugo de naranja (orange juice) and cafe con leche (coffee with milk).

While eating, a loud old American with really bad Spanish entered. His name was Jim who is retired and has never lived outside of Michigan. I showed my hand, the Michigan map, and asked, “Aren’t you going to do this?” This amused him. Jim started firing of a million questions at me and sprinkling a few complements into the conversation thrown in whenever he could. Mike kept inserting himself into the conversation. It grosses me out that men over 50 lose their ability to filter their sexual thoughts. It disturbs me not only do I get to hear these but am usually the subject of said thoughts. Ew! The young dude sitting at the other table was laughing the spectacle of the 2 old dudes instead of trying to save me. This is when I realized, instead of staying at a cheap bastard hostel, I was staying at the cheap OLD bastard hostel!

Before I left, I made the error of drinking wine with a friend while packing. This made me skip the crucial inventory/elimination step: assess the pile and remove several items. Instead, everything went into the pack, almost everything. On the bright side, my task for the morning as I wandered the streets was to find a long sleeve shirt, washcloth and socks. There is a big outdoor market on the west side of town, with everything from fruit & vegetables to tools. As I walked through the market, I was happy to not have a huge target on me since this was a market primarily for locals. I realized that I had not been bothered by any touts thus far in Guatemala. The Guatemalans seemed pretty relaxed. After a successful mission, I sat in a cafe with a view of Parque Central drinking coffee while spending quality time with Mac(Air) my travel companion. 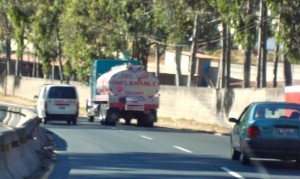 The tour company told me that I would be picked up at 2PM. At 2:14, the driver walks in right on time factoring for Latin Standard Time. Per usual, I was given the prime shotgun seat which is both good and bad. It is great to be able to see everything in front of me but also bad is I can see everything in front of me: the many close calls/hazards. For a long while the driver was tailgating a flammable truck. Once we finally passed, I saw an ambulance had been in front which would have been very useful had there been any mishaps. The last 10 minutes of the drive, the driver kept looking out the window at the tires after each speed bump. Would we make it the destination without breaking down? Yes, but once I got out of the vehicle, lo and behold I saw the flat tire. 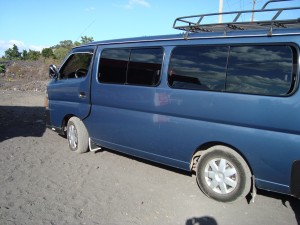 Before we parked, the vehicle was surrounded by a mob of kids ready to sell us sticks for the hike. A young girl who introduced herself as Maria asked me to buy a stick, when I said, “No, gracias.” she looked like she wanted to hit me with it. After I had a few moments to think, this is the first time kids are actually selling something useful. Therefore, I gave 5 Quetzals to the shortest kid for my stick. There were 2 minivans full of tourists and we shared 2 guides. Before we started to hit the trail, several people asked the guides for flashlights. No tengo! Half of the morons were unprepared and whined their tour company did not tell them to bring one. Duh, first rule of thumb, always fend for yourself. Although sometimes equipment is provided, there is no guarantee that it will work properly. I learned not to trust flashlights, linternas electricas, since exploring caves in Laos and Thailand. A cool couple from Canada, Linda & Maurice (who I kept calling Marcos) did not have a flashlight but I told them I would be their guide since I had my headlamp. 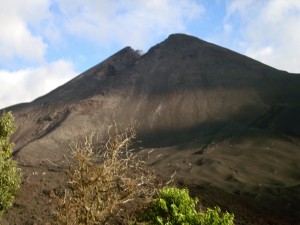 The hike was slow going because the group had to pause stop frequently to all for the stragglers to catch up. These breaks allowed me to soak up the beautiful countryside, the other Volcano’s in the distances and valleys made from previous lava flows spread before me. Some locals with their horses waited at the top of each steep incline in hopes to be hired by those who realized they were not fit enough. Thankfully, 30 minutes before sunset, the stragglers, who also happened to be that same people who lacked flashlights where sent to descend the volcano. Those remaining continued to a place just below the summit to watch the sunset. Through several crevices I was able to feel the steam and heat from the volcano. One guide had brought marshmallows for us to roast over one of the heated volcanic vents.

The sunset was absolutely amazing and it was getting dark quickly. The guide selected a different return route through the jungle. My headlamp was put to good use. Single file I called back to Linda and Maurice to help them dodge various obstacles: thorny bushes, down trees, roots, rocks and horse poo. There was one barbed-wire fence we had to crawl on our bellies to pass reminding me the Warrior Dash.

The sound of music and the children rushing us to retrieve our sticks, was the indication we made it back. While sitting and changing my shoes, I was circled by hungry dogs & kids begging for food. Looking at them and into there eyes, I knew they really needed food and handed over half of the large bag of organic cinnamon terra chips I had brought with me that the group eagerly took. Linda also got mobbed for food. The 1.5 hour ride back was quiet. Briefly, I chatted with Linda before we both passed out.

Jim was sitting in the bar when I returned. Since I was covered head to toe in volcano grime I nodded hello without stopping. After my shower I returned rejuvenated, Jim was gone and replaced by the young dude from breakfast was at the bar. Scott introduced himself and thanked me for the breakfast entertainment. He thought the conversation would to turn to Viagra once the old dudes discover I was a former Pfizer Rep. Scott was from Seattle and here for a 2 week holiday but shied away from telling me what he did for a living other then working at nights even though I asked me all about my job. I figured he probably worked at a bar, restaurant or really hated his job.

Two more 30ish guys joined us. First was Chris, a former mormon, here to film a documentary on the Mayan culture with help from Balam (meaning Jaguar) his Mayan friend. Chris asked me questions about India since his next project is a documentary about the Sex-trade Industry in India. Balam shared me his perspectives about his culture. In regard to 12-21-12, he was excited a new era is beginning  because it is signaling to be positive which is good since the last era, 3000 years, totally blew.