Given my desire to head to Hampi, you would think I’d be up and out the door at the crack of dawn. Although the room had nice amenities one of the important ones was missing: a screen for the window or mosquito net. Even though we were in a low risk area for malaria, Alex was still not taking chances and lit a mosquito coil. I woke up feeling horrible from breathing fumes from the coil and ended up sleeping in later. Hampi is only a 3 hours bus ride away therefore no need to leave on the 1st or even 2nd bus out of Chitradurga.

On the ride, I was happy that I did not give up on India yet just because I have given up on Alex. The scenery continued to get more breathtaking by the minute. I should have no problem lasting another 23 days. Shit, I’ve endured a hair over 6 months! 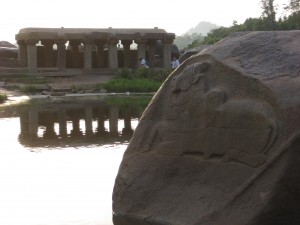 It wasn’t easy feat making it to Hampi, Alex issues aside. Our bus almost didn’t make it to Hospet due to a flat tire. Alex & me I along with the other passengers sat on the side of the road for 30 minutes watching 3 men put hot tar on the troubled tire as a makeshift patch. Once at Hospet, it was hard to get off the bus due to a mob of people trying to push their way onto the bus. Before catching a rickshaw to take us on the last leg, my bladder was screaming for relief. At the bathroom, I opened a stall to find a dog sleeping inside that appeared to be just as irritated as me. He was occupying my stall, I was interrupting his nap. When I came outside, Alex had already scored a rickshaw to take us the extra 13 kilometers to Hampi.

Our guesthouse was 3 blocks off the Hampi Bazaar on the banks of the Tungabhadra River. We were not the only creatures making this place home for the next few nights. Roosters and cows were hanging around. As we checked in, 3 water buffalo joined the party. The owners of the guesthouse who operated a restaurant on the roof terrace poured scraps of food into a circular cement tub for the newcomers. I thought Alex’s mood would have improved given the sweet room with a view of the river for a price within his elasticity.

I was elated to arrive at my target destination. Alex was irritated from the negation process and tried to spoil my mood but I ignored him thinking food would improve the situation. Alex and I walked back to Hampi Bazaar the main thoroughfare for the village to grab a late lunch with a view of the Virupaksha Temple, dedicated to Shiva, at the street’s terminus. Virupaksha temple is believed to be one of the oldest active temples in India making this place equally sought-after by pilgrims in addition to Westerners.

Alex’s irritation only escalated after eating a less than stellar thali that cost slightly more than usual. Walking down the main street lined with several shops to tickle the Westerner’s fancy did not help matters despite there being an equal number of stalls devoted to the Indian pilgrims. On our walk along River Road to get to the waterfront for sunset there were a few more tacky touristy shops we passed that were reminiscent to those in Luang Prabang and Vang Vieng. 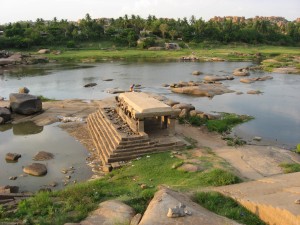 I’m not sure why Alex has a bug up his ass. Presence of Westerner’s aside, Hampi’s scenery is beyond spectacular and unlike any other place we have visited thus far. He’s acting like I dragged him to a cesspit. Given the UNESCO World Heritage committee has had Hampi on their list since 1986 of awesome places to check out; I don’t understand how anyone could not be in awe looking at the scenery spread out before us. Once we made it to the riverfront, the view was breath-taking with boulder covered hills framing the background and lazy river duplicating the image of the setting sun on its surface. Women were washing colorful saris in the river and laying them on the green grass or stones along the shore to dry. We were surrounded by stone. A stairwell of stone steps leading to the water. Stone Temples. Several stones carved into the likeness of Nandi who I presume is protecting Shiva’s Temple from those arriving via the river. 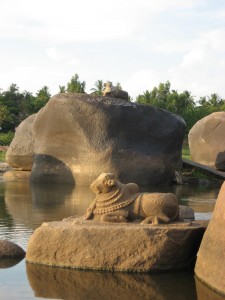 Alex was walking along the shore snapping photos of the surroundings and the sunset. I sat on the stone steps watching the sun slip below the horizon feeling happy and at peace. This is exactly what I needed: exchanging smog, chaos, noise and clutter for fresh air in a natural setting with peace and quiet.  Even in the small towns like Tiruvannamalai there has been non-stop noise.

After dinner and a trip to the internet café, Alex & I headed back to the guesthouse. My ill-tempered boyfriend started ranting about me dragging him to a godforsaken tourist town. Technically, given all the temples devoted to different Hindu gods this was not the best descriptor.  I had been trying to ignore Alex’s bitching and complaining all day. Now I was irritated and lost control of the filter holding my thoughts back. “What is your fucking problem? Are you expecting me to apologize for taking you to a beautiful place with fresh air? I’m sorry I wanted to go somewhere you didn’t. I’m sorry this place is interesting enough for others to want to visit as well. I’m sorry other Westerners are here to divert the attention off you my dear since I know you expect to be worshiped everywhere you go. Get the fuck over it! News flash, the world does not revolve around you. Even when people are fawning over us, you find ways to offend them. I am tired of having to travel with a miserable human being who tries to infect everyone around him with his misery.”

Soon everything was a blur. I had struck a nerve. Alex launched at me. I went from standing on my own 2 feet to being thrown down onto the bed. Alex had grabbed me by the wrists pinning me down with my arms overhead with him straddling me at my waist. He had fire in his eyes. As he was shouting at me, I felt his hot breath and spit hitting me in the face with each venomous word. I was too shocked to hear what he was actually saying. He was unstable. Keren, you need to end this now. “I’m sorry. I’m sorry. You are right. You are right!” I said aloud. The translation in my head was, “Fuck you! Fuck you! We are done! We are done!”

Alex got off me and went to the bathroom. I could hear him brushing his teeth with his Rotadent followed by flossing. I was lying in bed stunned. Never have I been so stunned in my life. I was trying not to shake or cry. What just happened? Why the fuck am I still here? Why have I given my boyfriend the benefit of the doubt for so long? It sucks we’ve had such a good life and so many happy moments together over the past 11 years. Now the shitty times greatly outweigh the good. I have finally come to the determination that it is not me but him that is fucking our relationship and life up. I’ve tried everything I could to try fix things that can’t be fixed. He is a miserable, manipulative, narcissistic, son-of-a-bitch who is incapable of change.

Over the years, I have been distracted by school or work to really stop and step back to see that Alex has been abusing me psychologically. Traveling with someone non-stop for 24 hours each day 7 days a week for 6 months, there is nowhere to hide. Everything is exposed. I have had more time on long bus or train rides to evaluate Alex’s actions. I have become more aware of how he has been trying to control me. The tactics he uses to manipulate me have become apparent. I’m an intelligent and confident woman, how could I have been so blind to his mental abuse for so long. I feel like an idiot. Although Alex has been mentally abusive, he has never laid a finger on me until now. He will not have the opportunity to do it again. This is absolutely the last straw! I am buying a ticket to freedom the first chance I get tomorrow.

When  Alex came to bed. I pretended to already be asleep. For most of the night, I did my best to remain awake and on alert. Eventually the Sandman intervened at some point during the night to allow me to take a break from my living nightmare.

1 thought on “Heaven on Earth or is it Hell?”