This morning, Alex miraculously recovered from his fake illness. We were up and out early to catch the 7:30 bus to Chitradurga. As the bus made the slow roll out of town, I said my goodbyes to the city, “Bye Bye Bangalore! Sorry I did not have enough energy to explore you as much as I should have. Maybe next time.” As we left the Garden City, the quality of the buildings declined, landscaping became shabbier and more rubbish lined the streets. On the fringe of city limits was a monstrous shanty town. It appears the size of the shanty is relative to the size of the city it borders. It disturbs me that I’ve become accustomed to sight of these types of communities since my arrival in Mumbai. Today I saw a new addition: camels!

Travel time to Chitradurga is 5 hours. I didn’t crack open my book once since there was too much to see outside the window given the landscape had changed so dramatically. It was nothing like the lush tropical coastal region of this state. Our bus was driving through the dry Deccan Plateau sandwiched between the Eastern and Western Ghats. The mountain ranges block the majority of the moisture that the monsoon rains provide in the coast thus making this a semi-arid landscape. This is the landscape I’d pictured India looking like prior to my arrival: a treeless desert with only bits of scrubby green vegetation. Large boulders were strewn about the countryside. 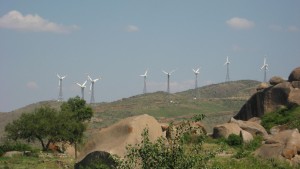 On the approach into Chitradurga there were rolling hills with relatively greener valleys in between. Half of the grassy hills surrounding valley were either capped with windmills swirling above like giant whirly gigs. The other half had gigantic boulders that looked as though a giant used handfuls of wet sand to drip over the hillside to make a haphazard sand castle. 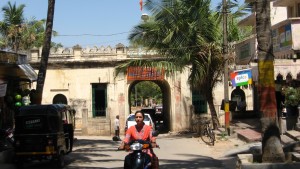 Getting off the bus at the terminal in Chitradurga, I understood why it was difficult to get information in the Lonely Planet, Rough Guide or on-line. Locals stopped what they were doing and looked at us with stunned expressions. Apparently not too many Western visitors swing through here.

Alex & I found a hotel not too far from the bus station. A friendly Muslim woman warmly welcomed us. She reminded me of one of my favorite doctors who would eagerly share any treats she received from patients with me whenever I popped in to peddle pills. I could tell this woman was offering us the best available room. It was large enough to accommodate an Indian family with 3 beds. She asked us if we were hungry. We were indeed famished! Before we even answered she was already writing the name of a friend’s canteen on the back of one of the paper receipts. 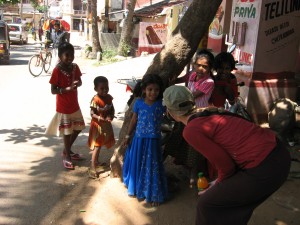 The locals were really excited to see and talk to us especially the kids. A young boy eager to escort us to the fort walked with us until we reached the canteen. He looked disappointed he would not be able to take us the entire way. The restaurant was filled with Muslim men who were happy to engage with Alex but gave me the stink eye. The owner was thrilled to have us and brought plates heaping with delicious food. 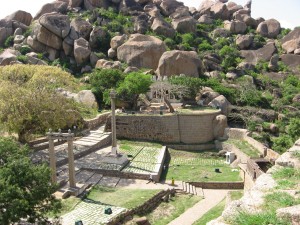 The main attraction in this city is the freaking enormous Chitradurga Fort built in several stages between the 10th and 18th centuries. Every time it was acquired by new inhabitants it was renovated. The finishing touches were made in 1779. The fort has 7 walls with 19 gates and 38 entrances with 4 of them being secret. Inside there were 18 temples, a mosque, a palace and a network of water tanks.

Alex and I entered through a non-secret entrance. We were the only Westerners among the many Indian groups and families visiting this impressive site. As Alex and I wandered the expansive grounds, we made a ton of friends and were adopted by a few families. One of the families had a very knowledgeable patriarch that could serve as a guide here full-time. His eldest 10 year old daughter who was an aspiring actress held my hand and politely called me and Alex: Auntie and Uncle. Later, Alex was peer pressured into drinking fresh spring water by another group. Thinking quickly he put his scarf in as a diversion and squeezed it on head.

Other than the little bits the family patriarch shared with Alex and me, I didn’t really know what I was looking at as we wondered the ruins but wasn’t concerned. I was just in awe of the splendor. The further we walked towards the back of the fort, the more isolated it became. We found a grassy area that also served as a good lookout spot to chill for a while. The old moat below no longer held water. It was now a grassy area for a group of goats to graze. 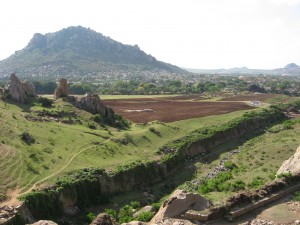 After spending a few hours at the fort, we made our way back to the hotel as the sun was setting. On the way, a large group of people on the street were looking up and pointing at the sky. Were they trying to watch the moon rise? Was it a bird? Was it a plane? An Indian man said that today is the start of the New Year. I was skeptical about that explanation given the lack of explosions that generally accompany any significant event.

Today was a good day. If I made the decision to fly out of Bangalore, I would have missed coming here in addition to Hampi. Alex has been on relatively good behavior for the past few days. However, today he was starting to crank up the cranky.

After dinner, we had a TV in our room and ironically watched The Break-up starring Jennifer Anniston and Vince Vaughn. I found it disturbing how accurate the movie is in a humorous way. The movie highlighted a few of our arguments and issues and was hard to hold back tears watching the movie since it hit so close to home and served as a reminder the road ahead is not going to be easy regardless if I stay or go.