As Alex & I were eating breakfast, a German lady passed by and decided to come in and sit down with us. Generally, talking to other Westerners can be a pleasant experience swapping stories and information. This interaction was unpleasant. This woman was grumpy droning on about how she did not like the town nor India. I wanted to make a quick getaway and leave Alex with a woman who was better suited for him. Misery likes company. Right?

The man we spoke to yesterday was right! There was not a lack of buses heading to Kochi. Today Alex & I caught a private bus for the first time in India we had AC & a DVD player. Approaching Kochi, our bus stopped next to another tourist bus that looked more like a party bus. Music was blasting and Indian men and women were dancing in the aisle.

The first hour in Ernakulam, the heart & transportation hub of Kochi did not go well given the heat and Alex’s heated argument with the rickshaw driver because he forgot I am the one who should speak to the driver if he wants to not get charged double the Westerner premium and arrive at the destination safely. The annoyed rickshaw driver who drove in a manner matching his inflamed mood, turning the ride to our destination into a nail-biter. We ultimately made it safe and sound to the Maple Residency in the Central Business District. 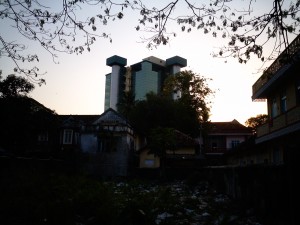 At first glance, the town reminded me of a cross between Penang and Kuching with modern communist block style buildings mixed with traditional Keralan tiled roof buildings with brand new luxurious buildings being built at a rapid pace all along the waterfront.

Kochi has been a major port for over 600 years. The Dutch, Portuguese, Chinese, Arabs and Japanese were the main trading partners thus influencing the culture and turning it into a cosmopolitan city that remains as such today. Arab merchants were the first to settle into Kochi. Later the Portuguese were the first of the colonial powers to put down roots followed by the Dutch and then the British. Today Kochi still remains a melting pot of cultures and religions.

Currently, it seems as the Kochi’s local economy and landscape is being shaped by the influx of money flowing in from Dubai. Strolling down MG (Mahatma Gandhi) road, we passed countless upscale boutiques,  jewelry stores and other finer goods that can be bought with the new sources of cash flow. When we visit areas like this, I feel like a grubby backpacker making me miss my stylish dresses, hot heels and jewelry.

Walking through the bazaars, I saw an abundance of bookstores. The literacy rate in Kerala is 95%, it made me think about the Laos. Perhaps Alex & I should pick up more books here to send to the school we taught the impromptu English class. My big expenditure for the day was buying a new pen to replace the one I bought in Hoi An which was already out of ink probably from writing diligently in my journal. 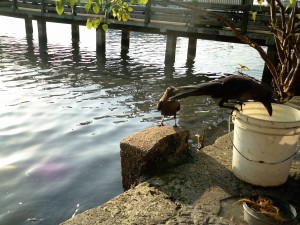 Alex & I found a less commercial and more mellow area along the water south of the Ernakulam Jetty. Alex & I stumbled upon a small waterside stall just for chai time and to snack on some hot banana pakoras. Two crows were also enjoying a late afternoon snack. This was the first time I saw a crow share his bounty and fed another crow rather than competing for food. This was probably the 2 crow’s first date. I elbowed Alex to take the crow’s lead. 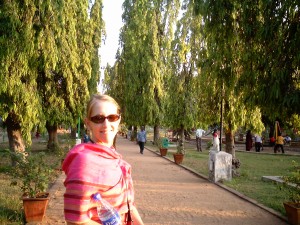 The rest of the day was a walk in the park. Literally. It was a lovely park filled with green trees blooming with colorful flowers, happy children playing and proud parents smiling. Given the hot day, it seemed everyone was having ice cream. Alex & I followed suit. We sat and enjoyed our treat perched on the seawall. Tonight we were not the only people tonight taking time to enjoy the sunset.