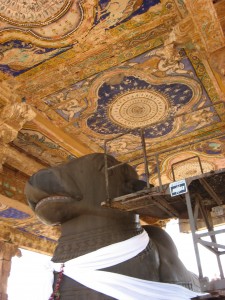 …And yes, the first item on the docket today was to visit a Hindu temple, Brihadeeswarar Temple. But wait. This one is special too! In my travels I am noting that each temple has its own special superlative. What makes this temple special is the Brihadeeswarar Temple was added to the UNESCO World Heritage List in 1987, the Who’s Who list of sights to see.in the world. Brihadeeswarar Temple now it has to share the pedestal with 2 other temples in India were added to the list in 2004 as Great Living Chola Temples. It also home to the 3rd largest Nandi sculpture in India. That’s no bull! Well actually, Nandi is a bull, the gatekeeper to Lord Shiva. Fitting because this temple is in honor of, you guessed it, Shiva! 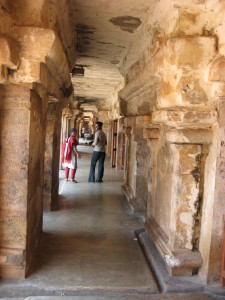 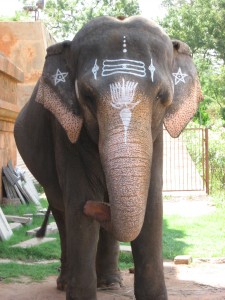 Alex jealous of all the blessings I received yesterday wanted to have his turn. Like in Udupi, the temple elephant was not so gentle. Alex said if the trunk hit him any harder he could have gotten a concussion. This reminded me of the monkey in Malaysia who assaulted Alex by hurling a coconut at him. The animals in Asia really do not appear to like Alex very much. Secretly I think they have my back. In the case of the monkey, it was appropriate given his bad attitude. Today, I felt bad since Alex was in good spirits today but did not prevent me from having a good laugh.

In the afternoon, we headed to the Palace Museum. Many places of interest we’ve tried to visit in India make Alex & I feel like 2 mice navigating a maze to find a piece of cheese. The construction in and around the palace provided the structure of a maze with detours and dead ends. To get to our destination we ended up walking through a school and cricket field. It was good to see a portion of the former palace dedicated to as a school and playground.

In school, history extremely bored me. Now, I love it mainly through the process of exploration. My teachers should have tried to make history more experiential rather than forcing us to memorize stupid dates. The museum was extremely fascinating and was able to learn more Indian history. Today’s subject was the Chola Bronzes from the Chola Dynasty. Some bronzes were more than 2000 years old. We climbed to the bell tower. Most of the floors along the way were deserted with the exception the one at the top that was home to a huge whale skeleton. I guess they needed a space to store it that was large enough.

Tucked into the same building was the Saraswati Mahal Library which hosts an enormous collection of manuscripts written in Sanskrit with many on palm leaves. They are in the process of trying to preserve the knowledge contained on these documents by digitizing.

Making our way back to the hotel, we passed through a gauntlet of kids. Alex was friendly and taught some of the boys how to high five. He was excited to be the focus of attention for once and I think this made up for being the victim of an assault and battery earlier in the day.