Friends have joked about Alex & I being on our own version of the reality TV show Amazing Race. Alex & I had been in Thanjavur for less than 24 hours and are on the move again. It is starting to become rare to stay more than one night anywhere. We’ve been in India for 54 days. During that time, we have stayed overnight in 26 different cities with a rough average of 50 hours per city. This is our reality and not a show. At the end of our many legs of travel, there will be no cash prize nor medals awarded.

While I do enjoy the thrill of grabbing my pack and heading to a new destination, our unrelenting state of motion is beginning to wear on me. While I like navigating the challenges faced on the road, it is exhausting to do this while having to butt heads with a difficult travel partner.

Trying to leave Thanjavur was a battle. This time it was with transportation, not the boyfriend. Usually, grabbing a bus and getting out of town is easy. Find the bus you need, jump (sometimes literally) on and pay the attendant when he gets around to collecting fare. Alex & I tried to catch the #74 bus to the “new” bus station as outlined in both the Lonely Planet and Rough Guide. Each bus that passed was too full for us to board with our backpacks. Alex haggled for 10 minutes with a rickshaw driver to give us a reasonable rate to the “new” bus station. Once at the “new” bus station, we caught the bus headed for Kumbakonrum. As the bus made its way out of the city, it made a stop at the “old” bus station, the one closer to our guesthouse. Sigh.

The next stop was in Kumbakorum, a transportation hub and commercial center for the Thanjavur Region bustling with activity. This is also known as a temple town. I was happy to be taking a day off from temple hopping and content with bus hopping instead.

The trip took longer than scheduled. An hour into the ride, we hit a major bottleneck in traffic. Even the rickshaws that usually deftly maneuver in between larger vehicle were at a standstill. Only the beggars, water buffalo and chai wallas were about to wiggle around the idling vehicles. I checked out the faces of the drivers and passengers in the traffic jam. Everyone looked miserable. The exhaust filling the hot air made it uncomfortable to breath and I was sitting in a pool of sweat. A bride that should be beaming on her wedding day was frowning looking completely stressed out.

One of the old Westerners made a big spectacle about going out of the bus to grab a chai. Of course, at this moment the traffic magically began to move. I laughed when the bus unceremoniously started to leave without him. The wife started freaking out and the husband started running to catch the bus spilling the chai.

The traffic soon dissipated as did the smog. The scenery also improved along with the air quality as we traveled towards the east coast. Passing people processing crops alongside the on the highway roads was reminiscent of Laos along with the similar modest thatched roof homes and shops. Seeing the rice paddies also made me think of Vietnam. However, the sights of men in dhotis or women wearing colorful saris walking among the fields made it evident that we were nowhere else than India. Glimpsing the bright blue sky and getting a whiff of salty air, I knew we were close to the coast and final destination. 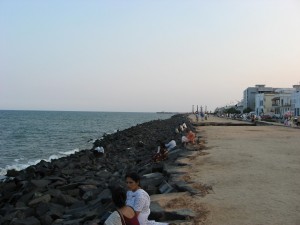 Once in Pondicherry, as Alex negotiated with the rickshaw driver, an annoying Old Westerner tried to latch onto us asking us where we were headed. After having another couple race us from a bus station to our selection in Laos after asking us the same question, I divulged nothing. What the fuck was he doing on the long bus ride? He could have peeked in his book for 5 minutes and figured it out himself. That’s what we did.

The nickname for Pondicherry is Pondy. The French had control of this city for just under 300 years. Walking in this city with quaint quiet side streets that had functional sidewalks made me forget I was in India momentarily before turning a corner and running into a cow.

Both of our guide books stated while there are plenty of  activities in the city, part of the charm is to do nothing other than enjoy a slower pace of life. At sunset Alex & I complied by taking a leisurely stroll along the rocky beachfront promenade perched slightly above sea level of the Bay of Bengal. 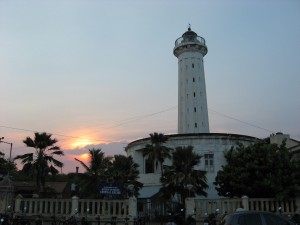 I was glad we were going to stay here for 2 nights. In the show, this would be considered a “pit stop.” The only item listed on my to-do list tomorrow was to “do nothing”. If I am going to be able to withstand another 36 days with my boyfriend/travel partner on our race to Calcutta, recharging my batteries is crucial.