Another time and in another frame of mind, I would have liked Pondicherry. Alex & I have been racing through India. There is so much to see, it’s hard to stand still. When I chat with other Westerners that are living in a fixed spot, I tend to get envious but then they tell me they are jealous of all the places we have seen. The grass is always greener on the other side. Although, I feel like it’s been a blur. I feel my desire for movement stems for my desire to move on from my current situation. Recently, I’ve been enduring each day rather than enjoying each day.  Not every day with Alex is bad. However, on good days I still brace myself for the mood swing. Despite some of the unpleasant aspects, I remind myself every day that I am lucky to have the opportunity to press pause on my career and explore another area in the world.

With a little more than a month left, I need to kick back and enjoy the ride and that is what I did for the bus ride from Pondy to Mamallapuram. While Alex was absorbed in a book I was captivated by the scenery as the bus rolled along a brilliant green countryside beautiful without all the rubbish and peaceful without the never ending honking horns. The countryside and villages between the big cities are so quaint while the cities are just pure filth evidence of the effect humans have on the environment.

Mamallapuram was another touristy enclave with 2 arteries with the usual shops aimed at Westerners who like to throw their money around. A new addition was shops selling stone carvings. Alex throws a fit whenever other Westerners have the audacity to be visiting any village, town or city at the same time as us. It gets worse if they have gray or graying hair packing extra pounds. While I dislike touristy towns, I don’t mind other people taking the spotlight off of me because it is exhausting being the center of attention every day.

Our room was chill having a communal balcony overlooking the street. I relaxed and read a book pausing occasionally to watch people on the streets below. A crow sat on the balcony railing trying to squawk a serenade to me. I vastly preferred listening to my crow friend over listening to my boyfriend’s rants. 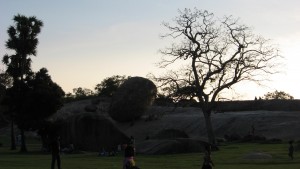 The main draw to this town is the UNESCO approved Group of Monuments at Mahabalipuram (the other name of this town). Close to sunset, Alex & I took a walk through one of the sites that felt like a park with both people from the East & West sitting on the stone and grass. A park filled with crazy carvings in stone on gigantic boulders and in caves (mandapas). One rock was perched precariously on another, called Krishna’s butter ball reminding me of Stone Mountain in Georgia in a way but on a much larger scale with more elaborate carvings and older dating back to the 7th century. The other attraction is the 5 Rathas, temples in the form of chariots.

Alex & I attempted to watch the sunset overlooking the green valley below on the Western side of the monuments. It was peaceful until a group of testosterone filled boys approached asking to take our picture with one of their cell phones. Alex was annoyed because they had pretended to take his photo too but ended up being ‘accidentally’ cropped out. Sorry Sweetie but you are not the main attraction here.

Before the sun set completely, we wandered random paths hoping one would lead us to the lighthouse. Three French women followed us for a bit assuming we could steer them in an efficient fashion to the front entrance. Soon they found other people to guide them down the right path. 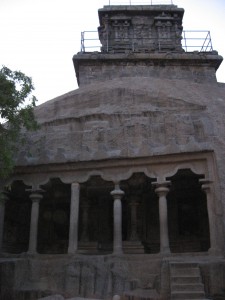 The lighthouse was perched on top of a ginormous boulder atop another intricately carved mandapa. It shared its perch with a nearby shrine. Alex & I were able to get a 360 degree view of the land and sea surrounding us but we were not the only ones here taking in the view. A gang of monkeys, who appeared to be guardians of the shrine, were sitting still watching the sunset. Along our travels, we’ve encountered many naughty monkeys which has given me a reason to not trust our distant relatives. Looking at them display a human characteristic tugged on my heartstrings. This momentary lapse of caution was a big mistake as we thought it was safe to check out the shrine. All of a sudden, a group of alpha monkeys ran towards us. Alex stepped up to defend us by throwing his water bottle at them. The water bottle appeared to appease them because they stopped the charge and drank the contents. Alex & I retreated.

It was time to leave anyway. Alex & I had stayed past the hours of operation. The side gates were locked. A man who claimed to be a “guide” was on the other side and willing to offer “help”. Alex declined handing out rupees to a random dude with a plan in mind. We walked a bit down the trail and scaled one of the fences for free to get out.

It was time to leave anyway. Alex and I had stayed past the hours of operation. The side gates were locked. A man who claimed to be a “guide” was on the other side and willing to offer “help”. Alex declined handing out rupees to a random dude. All we needed to do was walk a bit down the trail and scale one of the fences for free to get out.

1 thought on “Monuments, Mandapas and Monkeys”