When Alex & I lived in DC, Sundays were our lazy days. Leisurely breakfast followed by drinking coffee while reading the Sunday paper or newest book at home, favorite cafe or coffee shop. Here in India, it is hard to have a lazy Sunday since we tend to get up early eager to explore.

This morning we caught one of the first ferries to Fort Cochin. There were a few other Westerners on board with 2 having airline bag tags still on there luggage, once we hit land they will officially be considered “fresh off the boat”. The other couple both donning Angkor Wat t-shirts looked like they had been traveling for a while. The t-shirts stirred a little irritation within me that Alex was a pussy about traveling around Cambodia. 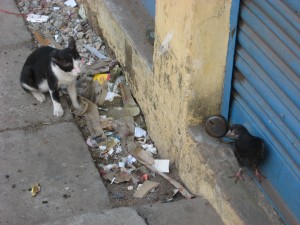 The ferry dropped us off at the customs jetty. Alex & I walked along Bazaar Street towards the Mattancherry Palace, aka Dutch Palace. Since it was Sunday, the bazaar felt bizarre, a ghost town bazaar. Alex & I shared the sleepy streets with goats. All the animals were mellow. Alex pointed out a cat hanging out next to a pigeon. Alex woke up a fat rat sleeping on the sidewalk to make me laugh and try to karmically make up for the 3-day Mysore mouse incident.

Why did we get here so early? Why can’t we just sleep in periodically? Nothing was open. The Dutch Palace: closed. The synagogue: closed. The only place open was a busy food shack along the waterfront serving hot vedas, idlis and warm chais where Alex & I took enjoyed a Sunday in DC.

Alex & I walked around Jew Town which was starting to set up shop for the day. As we passed various shops devoted to selling ornate rugs, paintings, antiques and jewelry we were chastised if we walked by without stopping to peer inside. I wanted to tell them my economist boyfriend was cheaper than the stereotypical Jew but refrained. Plus, considering Alex & I were still homeless we had no place for any of these items at the moment. 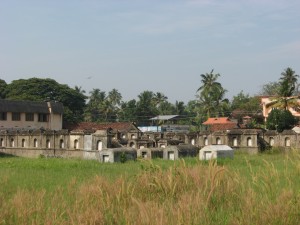 Next we wandered through a cemetery with above ground vaults reminding Alex & I of those in New Orleans our City of the Dead tour guide referred to as “Year and a day bakeries.”  I assumed these vaults were here for the same reason given the swampy landscape poses a challenge for ground burials due to the bodies not staying buried for long.

Alex & I spent more time waiting for the Dutch Palace to open than it took to tour. Even though it was well before noon, it was already freaking hot and humid. Alex agreed to take a rickshaw to the other side of the small island. This made me happy for several reasons: it prevented Grumpy Alex from appearing and allowed me to bypass a meat market. One street was lined with multiple butchers. Whole skinned goats, plucked or unplucked chickens and other carcasses hung out front. If not the whole carcass there would be a skull of a cow or pig head to help the perspective customer identify the shop. This would have made me a little queasy up close on foot but I was amused since we passed quickly by motor.

Fort Cochin draws in a lot of tourists but I didn’t understand the allure. The churches were not entirely impressive. The Chinese fishing nets seemed more archaic and difficult to operate than the Vietnamese version I saw in Quy Nhon. A few of the shaded tree lined streets with colonial buildings made me feel reminiscent of Charleston and Savannah but not enough to keep me here any longer. It was only noon but we felt like we had seen enough. The only thing to do other than walk the streets in the heat was to eat overpriced food. One of the highlights was being able to trade out one of my books as an even exchange while waiting for the ferry.

Our 4PM walk per usual started out at a busy chai stand with people were getting chai filled into their tins and thermos. One of the locals patiently waiting sidled up to me pointing to the crowd, “On break from hospItal.” The cafeterias are closed on Sundays forcing the workforce to forage for food. Alex & I waited with the sweet old man for our turn to try a version of Indian fried bananas that were worth the wait. The friendly but lonely local shared stories about his daughters who lived in Germany and Bombay.

I enjoyed walking around Ernakulam more then the tourist destination of Fort Cochin. As we wandered, we passed through the Shiva temple complex. The combination of the music playing, incense burning and the lanterns getting lit created a magical atmosphere.

Next to the temple was Durbin Hall Gallery. The young artist  waved Alex & me inside and gave us a tour. The paintings were done with a 5 color palette portraying a unique view of the Hindu gods. Several of his paintings were devoted to Ganesha. I wished could have bought one from him but there are several months left and the piece would unlikely survive the travel.

Outside Alex & I sat in the adjacent park watching Indian kids playing. We sat until it started to get dark and our tummies started to rumble. Always up for trying something new, I tried chili aloo gobi (curry made with potatoes and cauliflower). Alex ate his standard fried biryani.

Looking back at the day, it was not the most leisurely Sunday but it was a good day. Perhaps we will be able to relax more tomorrow once we reach the backwaters of Kerala tomorrow. Most likely, we will be eager to explore a new location.

1 thought on “Lazy Sunday? That would be a No!”