I woke up in an excellent mood and feeling well-rested despite having my sleep disrupted in the middle of the night to the sounds of explosions bursting through the sky. What was the reason for the middle of the night fireworks display? I tried asking a few people and then googling. With all the gods and festivals, who can keep track? I think I slept soundly since there was no risk of a rodent or mosquito attack in a fume free airy room.

This morning instead of the usual dosa, I tried an appam, a flat pancake made of fermented rice and coconut milk with a potato curry. I enjoyed a leisurely morning but did not want to stick around here for another day given I felt I saw everything that was worth seeing yesterday. Even if I didn’t explore all the town had to offer, I was eager to see what would be unveiled behind the curtain at the next stop south an easy 3 hour bus ride away.

Every day is a constant struggle to stay calm. My happiness can only last so long each day and is usually tied to Alex’s disposition. Why does my travel companion have to be so abrasive and cranky? I feel like a doctor trying to come up with a differential diagnosis for Alex’s multiple and fluctuating symptoms and behavior. Today I was at a loss. Alex had enough food, sleep AND even took a proper shit. Why was he still an utter grouch? I guess he suffers from Chronic Idiopathic Irritation. 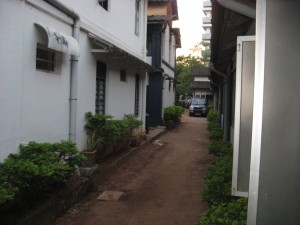 Fuck it! He can continue to be grouchy if that made him happy. When the bus pulled in to Thrissur or Trichur depending on who you ask, I’d already mapped out how to walk to the next guesthouse and I had plenty of rupees in my pocket. Without a word, I started walking Guru Kurpu Lodge in an effort to ditch my testy travel partner. A friendly older Indian woman showed me a cute room with cozy front balcony looking into the courtyard. Five minutes after checking in, the owner proudly delivered Alex to my room. Dammit! I really am tired of the friendly Indian folks ratting on me. At least I got to select the lodging without debate.

I’ve finally have come to the point that I really don’t give a shit about what Alex wants to do anymore given he has not only shown no desire to cater to my needs in addition to trying to find ways to sure I do not enjoy any activity that does not interest him.

The Rough Guide recommended the Thrissur zoo as worth a look and planned to go with or without him. Alex followed without fuss.

On the way to the zoo, we passed through the park surrounding Vadakkekara Palace. Passing underneath a tree, a mango literally fell into my hands. A cute Indian couple were harvesting mangos from a tree. The guy was sitting on the branch with clippers and using a basket pulley system to place the mangoes. The woman was there as a lookout and to retrieve the ones that fell to the ground. I passed the mango to the lady and she gave me a large smile and head bobble as thanks.

While I was attending to fallen mangos, Alex was warding off the advances from an elegantly-dressed male prostitute dress in a sari. When Alex told him he was more interested in visiting the zoo than receiving the offered services. The prostitute undeterred replied, “Honey, I have a zoo in my pants that is worth the visit!” Traumatized by the attention, Alex held onto my hand the remainder of the walk to the zoo for protection. I thought to myself, “Grow a pair. As a woman, I am harassed like this all the freaking time!”

The first building inside the Thrissur Zoo was a quaint little art museum. My favorite pieces were the cluster of silver cobras adorned with tacky plastic goggly eyes. Shortly after, Alex was impressed I ventured into the live cobra exhibit given my intense fear of snakes. I thought, “Know thy enemy” since most likely if there is a deadly poisonous around, I will find it. My research rational is to hopefully identify the snake in the event of a bite to get the correct anti-venom.

I generally have mixed feelings wandering through a place with animals in captivity. They way I justify and enjoy a zoo is most of these animals would win a Darwin award in their native environment. At least at the end of the day, they get fed a lunch rather than being lunch. 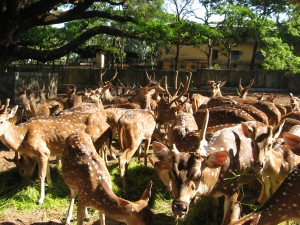 First I visited a group of deer. The males looked like reindeer who did not seem bothered to be so far from the North Pole except 2 of which who were sparring most likely to gain attention from the ladies. Next I saw 2 bears on the other hand that looked pissed off on the verge of heat stroke. Okay, let’s say we send them north to a cooler climate! The hippos and Indian buffalo looked like they were happy while the big ‘cats’ seemed stressed out. The tiger was pacing and panting. I read Life of Pi the first month of our trip. I could see why Pi would not be eager or comfortable sharing a small life boat with this sizable kitty. Next to the tiger was a black panther. I’ve heard black panthers are supposed to roam in Northern Florida in the Redneck Riviera near to where I went to University. I had never seen one but always hoped they were thinning the herd of drunken rednecks.

The last habitat we passed housed the monkeys. After several run ins with monkeys during this trip, I was glad there was a barrier. I was amused watching a few frolicking about but there were others who looked depressed. Since monkey’s are so streetwise and look so much like us, it does seem cruel to keep them in cages for human amusement. The younger monkeys did not seem to have broken spirits. One older monkey walked up to the edge close to me proudly showing off his penis. Yep, monkeys are closely related to us homo sapiens…well at least the males.

Before Alex & I left the zoo, we sat down to drink a cold beverage. Alex was happy the entrance only cost 8 rupees, roughly a nickel and bought me a Sprite for 40 rupees without me needing to ask. Perhaps he is slowly evolving into a gentleman.