Alex & I caught the early train to Trichy the short nickname for Tiruchirappalli. It took more hours to determine this destination than the 2 hour journey. Alex & I discussed the possibility of adding another stamp to our passport, Sri Lanka. After doing proper due diligence, for the first time in a while we agreed it was not a good idea. Looking at reports in the media, apparently the Sri Lankan government had revoked a ceasefire agreement that had been signed in 2002 due to violations in January and there was a suicide attack only 2 days ago. Apparently shit was hitting the fan. Travel advisories warned travelers about taking public transportation. Given that is our primary mode of getting from A to B and everywhere in between, we decided to postpone our Sri Lankan excursion.

Although we were getting along, Alex & I did not sit together. Our tickets were Standing Room only. I scored a seat due to the insistence of an Indian family making me thankful to be the “weaker sex” and an exotic blonde foreigner. I squeezed next to the eldest daughter of the same age. We chatted for the entire journey. My new friend lives in Madurai but commutes each week to Chennai where she works for Citibank in the quality assurance department. She promised me our conversation was not being recorded. Before I disembarked, she gave me her mobile number to call once Alex & I make it to Chennai, as long as it was during the work week. I knew regardless that Alex would not be game due to his aversion to friendly people.

Once we got settled into our hotel in Trichy, we made our way to Rockfort Temple. Alex & I both thought we could walk there given our ability to see the structure perched on the 88 foot meter rock in the distance but it was much further it appeared. We did the smart thing by hopping on a bus and grabbing lunch to prevent any grumpiness due to heat or hunger.

Alex, the one who lacks an internal GPS, insisted on taking the role of lead navigator and us the long way around to get to the temple entrance. I knew we were headed the wrong way but didn’t mind because I enjoyed the walk. This gave us the opportunity to run into an elephant and his keeper. The keeper gave us peanuts to feed his elephant. As we have seen in the past, the elephant tapped us upon our heads with his trunk in a sign of thanks. This was fitting given the temple at the top was devoted to Lord Ganesh. 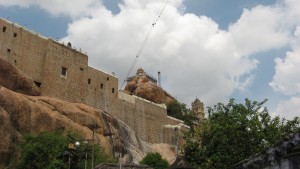 The climb to the top was not the most intense climb we have done to date but it was definitely the hottest. One of the translations of the city’s name is Holy Rock Town. I’d say Holy Hot-as-Fuck Rock Town! Now, I was starting to miss the rains of Kerala that seemed to cool things off. Once at the summit a gentle flowing breeze cooled me down. The climb was rewarded with a fantastic 360 degree unobscured view of our surroundings. In the distance, I could see another temple erupting through a patch of trees. This took me back to the Mayan Riviera in Mexico. It felt like I was looking out from atop of one of the Mayan pyramids. The difference that brought me back to the present was the towers still had paint. Also, I do not believe any enemies’ heads have rolled down the façades of these gopuras. Is that were the business idiom head will roll originates?

This brought me back to the decision Alex & I made to come to Asia ultimately leading me to where I stand today. First, we left our jobs and the States because we wanted to get away from all of the pro-war propaganda. It floored me to have people tell me I was a horrible person due to my anti-war stance. “You are not supporting our Troops!” I begged to differ because my anti-war stance kept troops from getting deployed into harms way and possibly killed or severely wounded but mentally and physically. I think this is me supporting the troops! Next, we made the verdict to come to Trichy and bypass Sri Lanka due to the instability of the civil war. Now, I’m thinking of the ancient warring Mayan tribes. Can war be avoided? I am not innocent. It seems daily that my boyfriend and I are battling each other 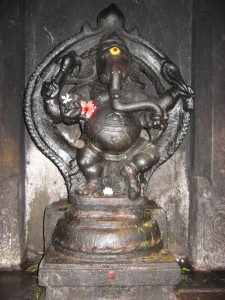 over stupid shit. Then I combat negative thoughts in my head.

Breathe in. Breathe out. It starts with me. All is right at the moment. I met a smiley elephant! I guess Ganesha really is the remover of obstacles. Let there be peace.