Today is Good Friday. Alex & I celebrated this Good Friday for other reasons than the faithful Christians because we made it to the southernmost town in India where 3 great seas converge: Indian Ocean, Arabian Sea and the Bay of Bengal. Making it here was not a small feat. It has taken us just shy of 7 weeks to get here from Mumbai and 3 hours by bus from Trivandrum. At times, I was unsure both Alex & I would make it here together.

Although the bus ride took longer than anticipated, the journey was breathtaking weaving through vivid greenery of banana, palm and jackfruit trees along with functioning rice paddies as we traveled up and over the Western Ghats.

Passing through small towns allowed for splashes of color in a sea of greenery. Colors mimicking the pastels of dyed Easter eggs. Little Indian girls wore pretty dresses. One little Indian girl in a bright yellow dress caught my eye as she spun in circles in front of a church. Shops were closed and empty. Church doors were open and overflowing. Most towns had speakers set up to broadcast the sermons into the central square and streets.

Once in the state of Tamil Nadu, the buildings too were painted with a pastel palette. Visions of violet, yellow, pink and sea green. Dogs and goats hung out on top concrete walls seemingly unaware of the kaleidoscope of color surrounding them.

As Alex & I disembarked the bus at the southern tip of India, I ran smack into the San Francisco girl I met at the ashram. She was waiting for our bus to leave. Alex got cranky, per usual, that another westerner had beat us to our destination. Every time he gets like this I want to remind him about the countless other Westerners who have come before us: The Dutch, Portuguese and British all arrived several hundred years earlier than us. Of course the British hung out in India for quite a while during the British Raj. In fact, Kanniyakumari is also known as Cape Comorin thanks to the British bastardizing Kumari. Given the fact Kunniyakumari is a point where the Eastern and Western coastal planes collide, it makes sense to have a history of Eastern and Western cultures also meeting. 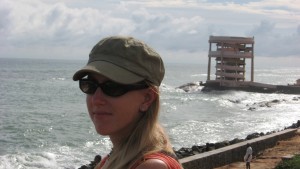 Even if I didn’t know we were in a different state, I would have been able to tell given the taste of our meal at lunch. Our thali had a different blend of spices served on a banana leaf rather than the standard tin plate.

After lunch we trekked to the southern tip. There was a pink corkscrew concrete structure that looked like a parking garage modeled after a conch shell. Alex & I walked round and round to get to the top where a spectacular 360 degree view awaited us. As we ascended, I saw armies of little black crabs that had originally looked like seaweed atop of the rocks. I watched 2 play tug of war with a small fish the size of a sardine. 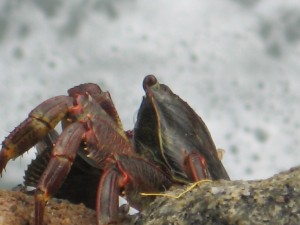 At the top of the screwy structure we were rewarded with spectacular scenery. Looking out in the distance over the water towards the horizon, it was hard for me to fathom that there was no land from the point we were standing all the way to Antarctica. All I could see was a dark charcoal wall of rain traveling across the distant ocean. The sounds of the waves crashing onto the rocky shore built in intensity to a crescendo. The water swirling below, a confluence of water from the Bay of Bengal, Indian Ocean and Arabian Sea getting intertwined.

Standing at this point, I was in a new state. Kanniyakumari is in Tamil Nadu the Indian state east of Kerala. Regardless of geography, I was happy to be in my own state. A state of bliss. Good Friday indeed!

Alex & I walked along a path west along the tranquil countryside. As we returned to the center of town, we ran into a gang of goats on their afternoon commute. 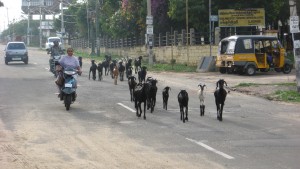 During dinner, the sky unloaded a deluge of rain relentlessly pouring down turning the street into a river. Floods of water not only were washing down the street but also into the restaurant. I took of my flip flops and enjoyed feeling the rush of water running over my feet. Alex’s shoe almost got washed away to Antarctica. The guy at our hotel thought Alex &  I were crazy for playing in the rain.

This is one of the few places in the world you can witness a sunrise and sunset from the same spot on the shore. Given the incessant rain, we were unable to witness sunset. As I set for sleep I was certain we would not be rising before the sun tomorrow.