I woke up before my alarm as the sun was beginning to rise. For the first time I heard something odd, the sound of silence. Nothing! Neither rickshaws nor Good’s Carriers honking because another bumper is politely painting a request for “Horn Please.”  Outside of my time at the ashram, there has not seemed to be a moment of silence since we arrived in this chaotically charming country. I laid in bed basking in pure peace. Slowly, the birds began chirping followed by the sounds of someone sweeping. At 6:30, my alarm went off. On cue like in the movie The Truman Show, Alex and the rest of the city woke up. Horns started blowing. Dogs started barking. Alex started talking. I was happy to have a day that began with 20 minutes of peace.

The bus ride got me reacquainted with noise. For the first time Alex & I actually used our earplugs. Once within the city limits of Chennai, we disembarked the bus and caught the train. The atmosphere was calm and polite which was not a surprise, we paid more to take the 1st class car.

Once in Chennai, we checked into our room and made our way towards the fort. The city was almost walkable. The sidewalks had the usual chaos along with the random missing cement tile that should cover the sewer below. It was also like being in a ‘90’s Step Aerobic class without the cheesy musical accompaniment to avoid obstacles on the sidewalk with the need to step on and off. The height difference between the sometimes unfinished road and the sidewalk was at times 2 ft.

Alex took the helm today despite not having the best navigation skills which took the lengthy scenic route to the Fort St George. As long as am not carrying my pack, I usually don’t mind taking a longer route. However, today I was not thrilled due to the mixture of oppressive heat and extreme humidity. Eventually we made it inside the walls of the fort and into the museum, the oldest standing building in the fort. The Mint is also housed within the walls for the fort which I thought was wise.

The first level of the museum housed a war memorabilia displays. I always have mixed feelings about war memorabilia. On one hand, I don’t like the glorification of war. On the other, the people involved should be remembered since they risked their lives for something they thought was justified. Looking at the well-adorned uniformed donned by the British, I thought they were fucking crazy for wearing wool uniforms in this hot climate. I was sweating my ass off from the long walk despite wearing only a linen tank and light cotton gauchos.

The 2nd level had British art depicting scenes in India and uptight British royalty in their elaborate clothing. Again, with all that clothing did they forget they were in fact in India not England? An Indian boy approached me with a huge smile that soon turned into a frown once I told him we were from The States rather than Britain.

Given my apprehension about looking at the wool and picturing people wear it here, it should be no surprise that my favorite parts of the museum was sitting on the benches underneath numerous fans. The upper levels housed more relics: portraits & porcelain which I skipped. Old portraits of dead people do not hold my interest. It is like a friend showing you an entire album of family photos; you look at a few but don’t really give a shit about seeing ones capturing Aunt Betsie’s childhood. Porcelain items piss me off given that even today meals are served on metal plates. I doubted the Indian’s had access to this fancy dinnerware back in that time period.

What I found interesting were old letters written by Robert Clive, the guy credited for securing India for the British Crown. Although I do not hold the man in high regard, his letters were eloquently written. People do not take time nowadays to write letters let alone write in a poetic fashion. The sketches on display I thought were interesting because it was history as seen in the individual’s perspective.

Our rumbling tummies led us to a canteen on the premise packed with government workers eating thalis served on metal compartmentalized plates. Alex, a former government employee, felt as though he was back eating with his fellow colleagues in DC. This thali was the most delicious to date, perhaps my opinion was influenced by my hunger. Alex was thrilled with the free refills. 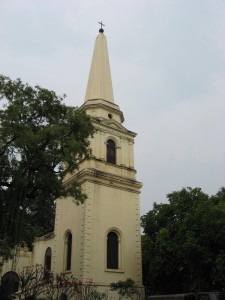 After lunch at the canteen, Alex & I were fat and happy ready to head back to our neighborhood. As we started on our way out, the sky opened up with a deluge of water forcing us to seek sanctuary in St Mary’s Church as the rainstorm passed. Erected in the 17th century, this church was a site to see itself given it is the oldest Anglican Church in India. Therefore it was no surprise to discover the adjacent graveyard also hosted the oldest British tombstones in India.

Once the rain passed, Alex agreed it would be a good idea to take the train back rather than a long trek. The rest of the afternoon was private time. Alex & I agreed early in the trip that we needed a few hours apart each day to do our own thing. It can be difficult spending 24/7 with another person. Alex went to the internet café while I relaxed in the hotel cracking open a new book. When he returned, it was my turn to have time in the Internet café.

When I was growing up, 6PM was a sacred time for our family. Everyone had to stop any activity to come home and meet at the oak dinner table. Now, Alex & I always meet at the hotel or designated rendezvous point at the same time to take our daily sunset walk. Today was no exception.

Alex & I tried to take our daily sunset excursion. The walk was difficult due to the already sad state of affairs of the sidewalks. After having a heavy rain come through the streets were muddy and covered in poo. The area was surrounded by shanties not conducive for a romantic stroll. We turned around and made our way back to the hotel. I read in the room before dinner planning to leave the dreadful city the next day.