Just in time management means something totally different to me now in India than it did in Business School: reducing inventory on hand and costs by ordering what is needed for production by getting the materials just in time for the next batch. In India it means managing to get to the bus station just in time to catch the next bus in its way out of the station in order to reduce the amount of time needed to wait. Alex & I love the feeling of making it to the bus station and hopping on the bus just as it is pulling out to leave.

Today we did not have a long wait nor do we have to endure a long bus ride. Our next stop was only 70 kilometers south. About 1.5 hours away and arriving before it is time for lunch.

As we headed over the last bridge into Alappuza, I was flashed back to my childhood in Florida crossing over a bridge that would bring our family to Cape Canaveral home of the Space Shuttle. It is funny how the brain processes new sights.

Arriving at the bus station, a ton of touts were awaiting the bus wanting to shuttle us onto a houseboat for a few days. “Boat.” “Boat.” “Boat.” Alex & I quickly escaped the hoards of houseboat pushers and found stationary lodging for the night at a lovely guesthouse around the corner. We shed what we now referred to our turtle packs and set off to find food. A tasty veg thali as only 500 meters away. 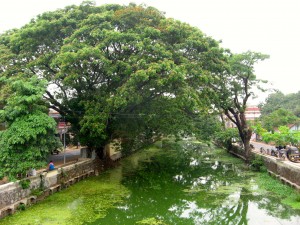 Alappuzha aka Alleppy is often referred to as the Venice of the East due to the numerous canals connecting to Kerala’s winding backwaters. Although today Alex & I were able to get here efficiently and quickly, we were in no hurry. I was expecting to like this town but wasn’t expecting to love it. We wandered without purpose down the alleyways and side streets. Then leisurely walked along the canals pausing periodically at a bench or atop the middle of the many bridges crossing over the bright emerald green canals to take in the beauty of our surroundings. The trees along the canal were huge reminding me of Savannah, GA. The air was fresh without the smell of exhaust or burning plastic.

It was easy for Alex & I to move a slowly given the mellow vibe of the town. Everything and everyone moved at a leisurely pace. Were Alex & I finally slowing down? There were moments when I did not hear the honking of the ever-present horn. A rare treat in India.

Speaking of treats. Alex & I are getting the courage to try more of the colorful sweets displayed at various restaurants and snack shacks. After our late day chai and prior to our evening walk to the beach, we tried the round sweets, laddus, I have been curious about since the first time I saw them on display in Gokarna. Alex insisted I should be the guinea pig and try the 1st one. “Ick! These are terrible!” Of course I was just kidding. The laddu tasted much better than the Thai cricket delicacy Alex lied about when he described it as tasting “like calamari with a jelly bean center. The laddu was moist and sweet tasting of cashew and ginger.

Today was the first overcast day I’ve experienced in India. I think I actually felt a few drops of rain. The beach was pretty and much cleaner than the average Indian beach. It was nice to not have the glare of the intense sun’s rays for once. 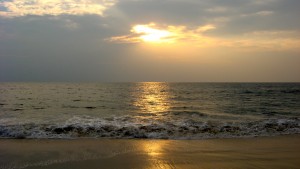 Silly us. We thought this place was perfect. Almost. As we settled into the sand to watch sunset, we noticed other creatures trying to get cozy. Mosquitos! Alex & I did not stay at the beach long enough to see the sun sink into the sea because the mosquitos were coming out in full force trying to sink their proboscis into our skin. Alex & I had not put on any repellent and had exposed skin. We double timed it back to the guesthouse to put on clothes and light a mosquito coil.

I dislike mosquito coils. It is like fumigating a house: deadly for the bugs and probably not the best for humans. As much as I dislike the mosquito coils, I think I would dislike malaria a bit more. Although we were both taking Malarone, it is wise to take other precautions. We went to dinner while the coil did it’s job.

After dinner, the coil had barely made one round and was still going strong. The downside to our cute room was there were no screens on the windows to allow air to pass and keep mosquitos out. We turned on the high powered fan to circulate the poison-filled air and keep us cool as we slept. Well today was almost perfect!