Alex & I got up early to catch the bus to Udupi at 6:45AM. Our breakfast buddy was opening up shop and waved us over. “Breakfast?” Alex told him, “No time. Need to catch the bus.” Our friend smiled and bobbled his head, “No problem!” and quickly packed us a bag of treats filled with a few fresh samosas, idlis and vadas, an Indian version of a doughnut made from dal, gram flour or potatoes with chopped onions. He waved us goodbye as our bus pulled out of town.

The bus ride to Udupi was quick for 4 hours. I almost didn’t make it since I almost hopped on the wrong bus during a stop for restroom and chai break. Although Goa is supposed to be the wealthiest state in India, I saw some magnificent buildings in Karnataka. I was surprised to see so many palm trees at higher elevations.

Alex & I really had no main reason to go to Udupi other than it was an easy 4 hour journey along our southern trajectory. At first glance, Udupi seemed to be just big bus stop with banks and temples. After further research I discovered Udupi is the town of origin for Alex and my newly beloved food: the masala dosa as well as Udupi cuisine and home to the famous Hindu temple, Udupi Sri Krishna Matha, dedicated to Krishna. 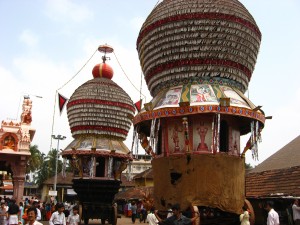 Alex & I dropped our bags off at Udupi Hotel, grabbed a bite to eat and set of to explore the temple that covered more real estate than the other temples in Gokarna. We passed a few chariots similar the 2 we saw in Gokarna but these were pimped out with flags and photos of the Hindu gods looking ready for a festival or celebration.

Walking along, I saw a little girl happily talking to her imaginary friend on her toy Barbie cell phone. When her mom saw me she stopped to introduce her daughter to a real life Barbie, me. The girl’s stunned expression with a dropped jaw was priceless.

Next we passed an enclosure that was home to the one of the temple elephants. I watched a man give the elephant food and bow. The elephant said thank you by tapping the man on his head with it’s trunk. Two Indian women walked up and also received a blessing in exchange for a snack. Seeing us, they smiled and goaded us to feed the elephant. Alex was the first to try. The elephant smacked him on the head hard. Me and the other onlookers laughed. I stepped up to the elephant and presented the food and received a gentle tap. For some reason, animals in Asia dislike Alex. This reminded me of the monkey at Batu Caves, that hurled a coconut at Alex.

Alex & I went to a proper restaurant for dinner. Alex saw a man eating a whole fish and ordered the same. After seeing so many turds on the beach, I continued to stick with my newly adopted vegetarian diet and ordered a veg curry.

On our way back to the hotel, we stopped by a sweet shop since we had passed by several that looked inviting with colorful sweets stacked up in the display cases. I tried a laddu which looks like a yellow meatball made out of chickpea flour. Alex made me try it first. The laddu tasted sweet and nutty. I joked and told him it tasted horrible because I didn’t want to share. Alex tried it and we ordered 2 more.

Alex & I randomly chose to stop in Udupi. I’m glad we did. This town had delicious food, friendly people and an elephant who gives blessings when bribed!