Alex & I are on the move to check out another beach an hour south in Palolem requiring taking 2 buses and a rickshaw. Since we had already passed through Margao twice, the bus connections were a breeze.

The ride south was absolutely stunning. As I was riding through the dusty and barren landscapes of Cambodia and Laos, I prepared myself assuming India was going to look like this as well. Sometimes I like to be proved wrong. Goa is in a tropical region on the Western Coast of India with Arabian Sea’s waves lapping the sandy shores. A variety of trees: banana, mango, cashew, bamboo, jackfruit and palm trees full of coconuts engulfed the bus in greenery as it weaved through the curvy and hilly roads. I spotted a few electric blue kingfisher birds, the namesake of my new favorite beer in India, darting in and out of the greenery.

Once we made it, almost, to Palolem Alex wanted to walk from the bus station but it was already 11AM and hot. As he started to walk, I calmly reminded him about our agreement in Thailand: always grab transport from the bus station to target guesthouse to preserve energy and sanity. Begrudgingly, Alex agreed to a rickshaw and realized I was right given it took 5 minutes via rickshaw. It would have been a long walk into town.

Alex never likes to be proved wrong on any occasion and immediately he started to throw a tantrum as soon as we got out of the rickshaw. We checked out Waves Guesthouse but neither of us was felt the vibe. Instead of pausing to discuss the other 5 options we had agreed upon the previous night, Alex walked off in a huff. After 3 peaceful days and a lovely hour bus ride, I was in no mood to deal with drama and refused to be sucked into Alex’s misery or have him suck the life-force out of me. Fuck it! I turned and walked in the opposite direction from my boyfriend.

I walked into a cluster of cute bungalows nestled among a coconut grove only steps from the beautiful beach. The price was higher than Alex would have wanted to pay but it didn’t matter, he was not here. This was the perfect price for paradise and peace at less than $10 a night. 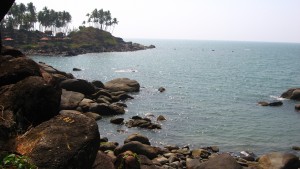 After securing lodging successfully, I was ready to roam. First, I headed south along the soft sandy beach to a trail taking me up a rocky hill overlooking the crescent beach below. There were a few bungalows that looked like they belonged to a community of long term backpackers. A palm tree served as the community bulletin board with a few fliers posted, one announcing daily yoga at 9AM and 4. Everyone appeared to be hanging out on the beach. I paused for a bit enjoying the solitude before heading back down.

I explored the northern part of the beach. As I walked, I braced myself for a run in with Alex but given the time of day, he was most likely hiding from the sun inside an internet cafe or restaurant. For now, I was safe to explore. The northern end of the beach was framed with large rocks reminding me of those I used to scramble upon as a child at the Ponce Inlet Jetty among the crabs and crashing waves. This made me feel as carefree as I did in those days before the drama of adulthood. 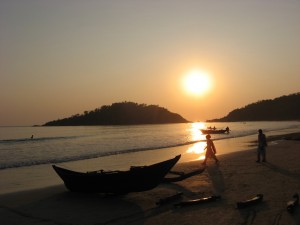 At sunset, I soaked up the scenery and sipped on a cold Kingfisher. This beach was unlike the idyllic isolated beaches seen on postcards. Yes, the sand was pristine and the water was a glistening blue-green but given this was India, there was so much more. Countless colorful wooden fishing boats were docked on the sands awaiting the next morning’s voyage. Western men played soccer in between the boats. An additional obstacle was the ever present cow that would wander in-between causing a temporary interruption to the game. Scantily clad Western woman walked the beach as did Indian women in elegant sari’s flowing gently in the breeze.

Among the action, I spotted Alex’s profile walking in the distance. I assumed he was searching for me. I felt conflicted. Part of me wanted to go up to him and let him know I am okay. The other part of me did not want to deal with him. Alex has done his best to make me hate him on this journey. I am torn between 2 powerful emotions love and hate.

As the sun set, I watched a pack of dogs gang up on a lone beach dog causing him to retreat into the water. This sight seemed to be a metaphor of my current situation. Alex’s many moods at times have been as aggressive as the pack of dogs while I was the lone dog forced to find ways to retreat and save myself much like I did today and 2 other times in Laos.

Lost in thought, I did not see Alex approach until he was seated in the cushion next to me. Shit! So much for avoidance. He offered his usual hallow apology as he ordered a large Kingfisher for him. We talked and ended up eating dinner together. At the end of the night, Alex asked if I wanted to check out his guesthouse. “Is it on the beach?” It wasn’t. I declined. Alex trying to behave like a gentleman by walking me back to my bungalow as if we were on a first date. Like a first date, I gave him a kiss good night, made tentative plans to meet for breakfast and sent him home.