The best thing about bus transportation in India is the ability to not plan ahead,  just show up, hop on the next bus out of town and see what happens. Today Alex & I hopped on the 1st southbound bus in the queue of buses. We were going to Mangalore. The fare was less than a dollar, 33R.

Alex & I took advantage of having a masala dosa at the source along with a few cups of coffee. Alex forgot the vow we made in Goa and had 1 cup too many and was hopped up on caffeine. His mouth was running a kilometer a minute making it hard for me to zone out and look the window as the bus travelled south. As we passed over a bridge, I looked down at the river below. There were 2 dark, almost black, gaunt men standing on a boat wearing man skirts, dhotis with palm trees in the background. What I saw out the bus window looked almost identical to the cover of Alex’s Lonely  Planet.

The outskirts of Mangalore was dusty and industrial. The roads were torn up because the sewers were being upgraded. Rocks and boulders painted with bright colors were the low cost version of the barricades we use at home to denote the construction zone. A coal power plant spewed filth in the distance which made the one we left in Alexandria look like it was uber green. Loads of teak and granite awaited next to the train tracks for processing and transport.

According to Andy’s Lonely Planet, there is nothing to see here. What? This is a huge city with loads of friendly people! We checked into a hotel that only cost the equivalent of $8.50 that was much cleaner and nicer than any you could find in the states for $50-80. Alex & I popped into the hotel, which also means restaurant, next to our hotel where we were treated like superstars while we ate our thalis.

After lunch, Alex & I hiked up the hill above the hotels to Light House Hill. I thought it was odd to have a lighthouse so far inland perhaps to cause unsuspecting enemy ships to crash into shore. The British built the lighthouse to be a watchtower. Now the base of the watchtower is a library surrounded by a park.

Rampant construction on the hill which blocked us from seeing anything. I’m share at one point this hill offered a spectacular unencumbered view. The entire city appeared to be under construction due to an economic boom. New modern buildings were sprouting from the ground which made me think this town is moving away from agriculture roots and turning to tech. This city could be the source of the outsourced IT jobs from the US. 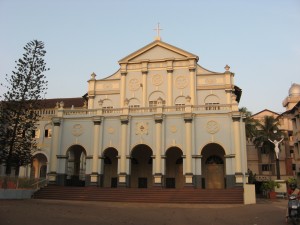 Also at the top of the hill was St Aloysius a Jesuit college. Over the past decade, I have been annoyed by Alex’s  fascination of church architecture. I spent much of my childhood getting dragged into what I considered wretched buildings of persecution, judgement and hypocrisy. Now, I have a boyfriend who drags me into church. Generally, I have a mini panic attack when it comes to entering a house of worship. However, I am starting to see things differently. If I can be open-minded in trying to understand other religions like Buddhism, Islam & Hinduism, I can look at the Christianity with a fresh pair of eyes.

As Alex & I walked into the church. The interior was covered in colorful frescoes depicting the stations of the cross and other scriptures. Students were practicing their hymns. The sound of them singing bounced off the walls and ceiling of the church and I could feel the vibrations within me. This was magical & beautiful. Suddenly, all my past trauma melted away. I felt reborn. However, please do not confuse this with being a Born-Again-Christian. 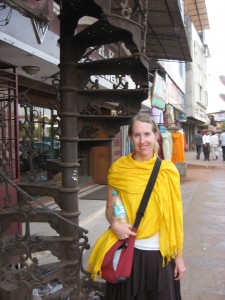 Speaking of birth, my next birthday is only 2 months away. My 30th year has been an eventful one. People in their late 20’s tend to freak out about turning 30 because of they should have accomplished certain goals. Looking back, I was one of them. With age comes wisdom. Age is just a number. There is no rulebook or manual on how to live your life. Well, perhaps there are plenty, like the travel guides: Rough Guide & Lonely Planet and religious texts. They should be viewed as suggestions on how to navigate life. Peruse the guides, take what you need then steer your own course. Life is what you make it.

If Alex & I had listened to the traveller’s bible, The Lonely Planet, we would have skipped Udupi and Mangalore because there was “nothing to see here“. I’m glad we didn’t heed to the books suggestion. There was plenty to see if you open your eyes.

2 thoughts on “Nothing to see here?”